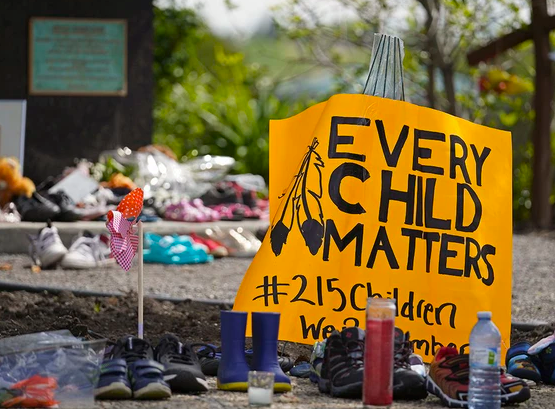 Hundreds of children's shoes remain in place at a memorial outside the Alberta Legislature building in Edmonton on Monday May 31, 2021. A vigil was held Sunday May 30, 2021 in memory of the 215 indigenous children whose remains were discovered on the grounds of a former Roman Catholic church residential school in Kamloops, B.C. Photo by Larry Wong/Postmedia

What we don't know about unmarked graves at residential schools

Over the past month, three noteworthy events have presented as provocative grist to the groaning mill of Indigenous-“settler” relations.

First, acclaimed Cree playwright/novelist Tomson Highway’s memoir , Permanent Astonishment, was published by Penguin-Random House. Highway’s experiences at a residential school did not embitter him. On the contrary, he credited that nine-year stint for the foundational skills that led to creative self-realization. But saying so publicly, once permissible, has become a form of blasphemy in the chattering classes.

In his 2018 Quillette essay on Canada’s “cult of the noble savage,” which included remarks about his abrupt departure from editorship of The Walrus magazine, Jonathan Kay explained Highway’s “problematic” stature amongst progressives. In 2015, Kay commissioned an article from Highway in anticipation of the Truth and Reconciliation Commission’s report. Highway’s submission was “brilliantly crafted,” but “heretical.” The piece was never published because, as a white colleague explained to Kay, it would upset “sensitive constituencies” — Indigenous groups and their non-Indigenous allies, as well as donors — who “had come to see our magazine as a reliable voice for the approved position on this issue.” It was then, Kay realized, “that what I had entered was not a journalistic enterprise, but a sort of [religious] congregation.”

Then, on Dec. 20 — perfect timing for news that drops stone-dead in minutes — Mount Royal University informed Frances Widdowson, a tenured professor in the Department of Economics, Justice and Policy Studies, that she was being fired for having contributed to a “toxic workplace environment,” thereby “negatively impacting the mission and reputation of the university.”

Widdowson’s extensive scholarly research is not in question. Her bio says she “uses a political economy perspective in her research on Aboriginal and environmental policy, as well as the politics of religion.” But even the title of one paper, “The Political economy of ‘Truth and Reconciliation’: Neotribal Rentierism and the Creation of the Victim/Perpetrator Dichotomy,” reveals why she is considered a blasphemer by Indigenous activists and their campus allies.

Widdowson never minces words. Her antagonists are particularly enraged by her needling trope “race hustler” to describe “a self-proclaimed spokesperson for a particular racial identity during a perceived incident of racial tension, so that the individual can exploit the situation to serve their own interests.”

In September 2020, Widdowson’s pointed criticism of the Black Lives Matter movement (BLM “has destroyed MRU”) led to a colleagues-initiated petition to have her fired that garnered 6,000 signatures. But even before that, her fate was likely sealed in 2016 when she protested the plan to “indigenize” learning, an ideology-based plan to “embrace Indigenous knowledge and ways of knowing, to integrate Indigenous teachings and practices.”

Widdowson is happy to see Indigenous beliefs studied, objectively, as we do other belief systems like Christianity, but indigenized learning forces students to actively valorize these “ways of knowing” as equal to science-based knowledge. Such coerced genuflection to other people’s idols is just not on for her.

Widdowson is now engaged in research around the hot-potato issue of unmarked graves at Indian Residential Schools (IRS). Which brings us to the promised third event. Jacques Rouillard, professor emeritus in the Department of history at the Université de Montréal, has published an article in the Dorchester Review , titled “In Kamloops, Not One Body Has Been Found.”

One of 2021’s biggest stories was the “discovery” of unmarked children’s graves in the grounds of Kamloops, B.C.’s, former industrial residential school (1890-1978), founded by Shuswap Chief Louis Clexlixqen, and run by the Missionary Oblates of Mary Immaculate and the Sisters of St. Anne of Quebec.

The “discovery” meme arose from a scanning by ground-penetrating radar in a search for the remains of children already surmised to have been buried there. A preliminary report did not find bodies, but rather soil disruptions in a nearby apple orchard. No remains were exhumed, but First Nation Chief Rosanne Casimir stated that according to community “knowledge,” the soil abnormalities were 215 “missing children,” some as young as three.

The anthropologist who oversaw the scans cautiously theorized that there were likely 200 “probable burials” — not specifying age — based on the disturbances. But only excavation could provide further evidence of anything, and no excavation has yet been done. But the story was too good to fact-check, and went viral, often with the trope “mass graves” substituting for “unmarked graves,” a distinction with an enormous difference, since “mass” graves are associated with genocide.

Suddenly there was talk of “thousands” of “missing” Indigenous children whose parents had not been informed of their deaths. The Parliamentary flag was lowered to half-mast; China (of all nations) called for an investigation into Canada’s human rights violations at the UN Human Rights Tribunal; Pope Francis expressed pain over the “shocking discovery in Canada of the remains of 215 children” at Kamloops.

Nobody in political authority — certainly not our instantly and abjectly apologetic prime minister — has to date pointed out that no actual remains have been found. Thus, Rouillard writes, “[G]overnments and the media are simply granting credence to what is really a thesis: the thesis of the ‘disappearance’ of children from residential schools.” The consensus of “cultural genocide,” endorsed by the TRC (but contested by many accredited historians routinely cold-shouldered by uncritical mainstream media), has effectively been elevated to literal genocide, “a conclusion that the Commission explicitly rejects in its [TRC] report.”

The bulk of the article details myth-busting evidence that should act as a cautionary tale against uncritical acceptance of feelings-based narratives over objective academic inquiry. Rouillard concludes, “It is hard to believe that a preliminary search for an alleged cemetery or mass grave in an apple orchard … could have led to such a spiral of claims endorsed by the Canadian government and repeated by mass media all over the world … Imaginary stories and emotion have outweighed the pursuit of truth.”

Rouillard’s essay then terminates in a well-considered question — one all Canadians should ponder — that could be applied with equal relevance to The Walrus’s cancelling of Tomson Highway and MRU’s firing of Frances Widdowson: “On the road to reconciliation, isn’t the best way to seek and tell the whole truth rather than deliberately create sensational myths?”