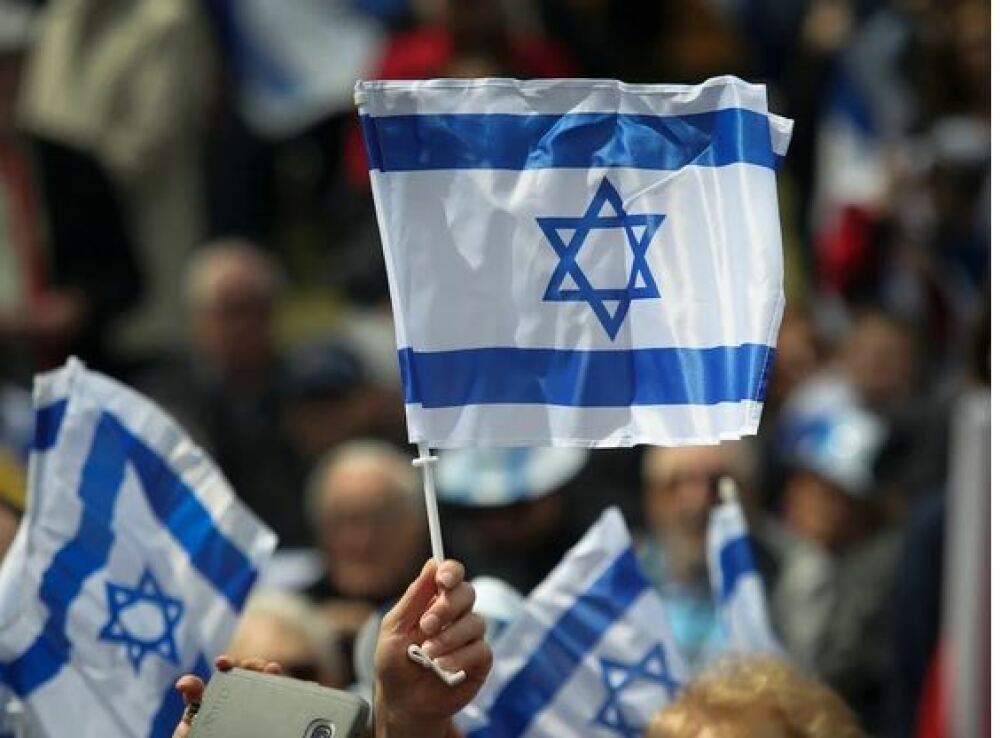 A flag of Israel is held aloft at Place du Canada in Montreal Thursday, May 9, 2019 during Yom Ha’atzmaut celebrations. It was the 71st Independence day of the country. (John Kenney / MONTREAL GAZETTE)

Another Israel super-critic gets funding from the Trudeau Liberals

Islam cannot be a victim of hatred. No religion or set of beliefs can

In 2022, it became clear that our federal government has an antisemitism-linked funding problem. News stories over the last year featured such recipients of federal largesse as “anti-racist” Laith Marouf, a vile antisemite, and Mississauga-based Meshwar Media (whose  Holocaust-denying publisher Nazih Khatatba took part in a November all-party Parliamentary meeting gathering).

Once is a mistake. Twice is a coincidence. Three times is a pattern.

In 2018, Jasmin Zine, a sociology and Muslim studies professor at Wilfrid Laurier University was awarded a federal grant of $24,900 for a research project resulting in a report titled “The Canadian Islamophobia Industry: Mapping Islamophobia’s Ecosystem in the Great White North.” Its driving theme is the need to expose a matrix of people and groups who “demonize and marginalize Islam and Muslims in Canada.” Zine rightly identifies certain white-supremacy groups that have been called out for their racism many times. But Zine’s principal “watch list” targets individuals (including me) and organizations with views regarding radical Islam and Israel that Zine personally disagrees with.

I reject Zine’s definition of Islamophobia, which she defines in part, as “hatred of Islam and Muslims.” Islam cannot be a victim of hatred. No religion or set of beliefs can. Only people can be victims. A society that does not permit vigorous criticism of ideas is not a free society.

Zine failed to disclose her history of activism in the Boycott, Divestment and Sanctions (BDS) movement, which has for its goal the abolition of Israel as a Jewish state. Prime Minister Justin Trudeau has stated that, “it’s not right to discriminate or to make someone feel unsafe on campus because of their religion, and unfortunately the BDS movement is often linked to those kinds of frames.” For this, Zine gave him a “fail” grade on this topic in the “Canadian Muslim Voting Guide” her team published days before the October 2019 federal election. Michael Mostyn, CEO of B’nai Brith, responded, “It is totally unacceptable that government funds have been used to promote an antisemitic movement in Canada.”

Zine notes, to my alleged discredit, that I sit on the advisory boards of the Canadian Institute for Jewish Research (CIJR) and Doctors Against Racism and Antisemitism (DARA). It is rising antisemitism in the BDS movement Zine wholeheartedly endorses that created the need for both these responsible bodies. For instance, as a damning new (academically credible) report out of the University of Toronto demonstrates, there is a shocking degree of antisemitism in that institution’s medical faculty. Its author, Ayelet Kuper, notes, “there are those who not only cross over the line (from criticism of Israel) to anti-Jewish hatred, but who do so proudly … hiding behind the Palestinian cause all the while.”

Brooke Goldstein, founder and director of The Lawfare Project, who is all too familiar with other “reports” like Zine’s, published by Islamist groups bent on suppressing free speech, wrote to me: “Their intent is obvious: to try and intimidate people into silence. Fortunately this tactic is passé and has the opposite effect of emboldening those of us in the human rights world to speak loud and clear about these issues.” Fortunately, too, by imputing inherent Islamophobia to anyone affiliated with Israel-friendly organizations, Zine has “opened the door,” as lawyers often say, to the introduction of evidence regarding her own inculpating connections.

Georgetown University’s Middle East Studies program, ACMCU’s home, has been described by Campus Watch as “the most intolerant, ideological, anti-Israel, and pro-Islamist in the United States,” a dubious distinction in a crowded competitive field. The ACMCU has strong ties to the Council on American-Islamic Relations (CAIR), an unindicted co-conspirator in a terrorism-finance case linked to Hamas.

On to the NCCM. This organization is an established offshoot of CAIR with a problematic history of libel lawsuits. Their former CEO, Mustafa Farooq, who departed NCCM only three months ago, is quoted as embracing the notoriously antisemitic Malcolm X as his Islamic model for truth and justice.

Finally, Hatem Bazian, Zine’s colleague and “Islamophobia industry” guru, is tethered to a troubling rap sheet. Bazian is the founder of Students for Justice in Palestine (SJP), and chair of the American Muslims for Palestine (AMP), both of which have been identified as being linked to Hamas. In 2017, Bazian retweeted a blood libel of organ theft against Israel.

Overt antisemites like Laith Marouf and Nazih Khatatba have no standing amongst Canadians. Their hatred was easily revealed merely by turning over a metaphorical rock. But you can’t “turn over” an institution with high public standing. Academics, linked in an antisemitic “eco-system,” can thus launder their bigotry through bogus “reports.”

Far from persuading intelligent readers of an “Islamophobia Industry” in Canada, Zine’s fatwa-lite document serves to illuminate the hallmarks of another sort of industry altogether, one that seeks entitlements for a single religion and its followers, that no other religious group in any democratic country has ever demanded. Shut it down.