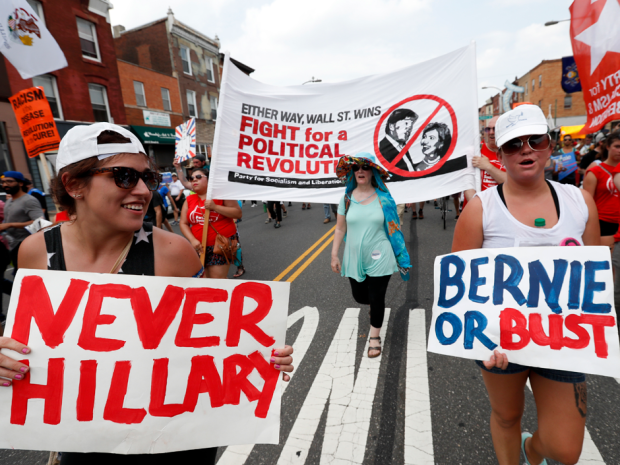 Some Democrats — including many on the alt-left — preferred to see a loose cannon like Republican Donald Trump win the U.S. presidency rather than vote for establishment-symbolic Hillary Clinton.

In her post-election column, Wall Street Journal columnist Peggy Noonan described the mood of Hillary supporters as one of “enraged mourning,” an excellent description for the emotional and often irrational reactions to Trump’s win we’ve all seen in the news and social media. My favourite was the New York woman who decided to make herself and daughter the focal point of her family’s Christmas card, relegating her husband and son to a sidebar frame, in order “to reaffirm her place in the world.”

And yet not all Democrats were unhappy to see Hillary lose.

We’ve heard a great deal about the “lesser-of-two-evils” voters on the respectable right who regarded Trump with such distaste they voted for Hillary. What we haven’t heard so much about are those on the alt-left — the diehard Bernie Sanderites — who actually preferred to see a loose cannon like Trump win rather than vote for establishment-symbolic Hillary. They are not fringe or few; they are legion. If they had all voted for Hillary, she might have won. But they didn’t. And they are, overwhelmingly, young.

The millennials “preferred Sanders over Clinton by a margin so overwhelming that the word ‘landslide’ doesn’t even begin to describe it,” says City Journal reporter Michael J. Totten, who made the Sanders faction the focus of his scrutiny while attending the Democratic National Convention in Philadelphia last July. They dislike Hillary every bit as much as Trumpists do, but the similarity ends there. Totten saw signs of extremely edgy views in Philly: signs reading “Go home, F*** Hillary,” but also “Long live the Intifada!” Sanders people urged Communist Party pamphlets on all delegates.

Totten interviewed individuals on what they felt was wrong with Hillary (“lack of integrity” ranked high) and the Democratic party: “The Democratic party hasn’t gotten rid of patriotism yet” and “They brought out the flag and sang the national anthem” which “makes me uncomfortable” were some of the comments that troubled him.

It would be reassuring to believe that this alt-left group’s anti-American views are age-specific and that they will become more “patriotic” as they get older. But that is unlikely to happen. The millennials are an attitudinal cohort: They are to the Democratic party of the future what the baby boomers of the 1960s counter-culture were to the Democratic party today. That future, if the Dems get back into power, will likely belong to Marxists.

In an exhaustive report, The Danger of Deconsolidation: The Democratic Disconnect, published in the Journal of Democracy last July, political scientists Roberto Stefan Foa and Yascha Mounk found young people today have become more authoritarian in temperament and even antipathetic to democracy in concerning numbers, not only here but in a wide swath of Western countries.

For example, Foa and Mounk found that only 30 per cent of their subjects believe that it is “essential” to live in a country with a democratic system of government, while 24 per cent think poorly of the democratic system in general. Only 32 per cent of millennials think it is “absolutely essential” that “civil rights protect people’s liberty.” The authors conclude that “Across a wide sample of countries in North America and Western Europe, citizens of mature democracies have become markedly less satisfied with their form of government and surprisingly open to nondemocratic alternatives.”

Next time around, the progressive “alternative” won’t be Sanders. Not just because he’s old, but because his supporters felt betrayed when he joined forces with Hillary. They booed Hillary and running mate Tim Kaine, and then when Sanders asked them to stop, they booed him, too. They had taken him literally in the primaries when he called for a revolution. And they are ripe for seduction by a charismatic leader who wants to “transform” America leftward every bit as much as Obama did, but with much less respect for the democratic process.

As Totten points out in his City Journal article, idealistic millennials are largely ignorant of what totalitarianism actually means. They think it is OK to be authoritarian if the end is social justice. But all Marxist visions of the world have insisted that social justice is the goal, and all Marxist regimes have succumbed to the totalitarian temptation.

Politics is downstream from culture, Andrew Breitbart famously said. Progressives have had a free hand with the culture for the past 30 years. In that time they’ve achieved many victories, the greatest of which was to colonize the campus and produce Marxism-marinated cultural elites obsessed with group rather than individual rights. The next Democratic party candidate could well find herself in thrall to them.

Seen in history’s rearview mirror, Donald Trump — crude, impulsive and often offensive, but no fascist — may well turn out to be, in the scheme of things, the lesser evil after all.