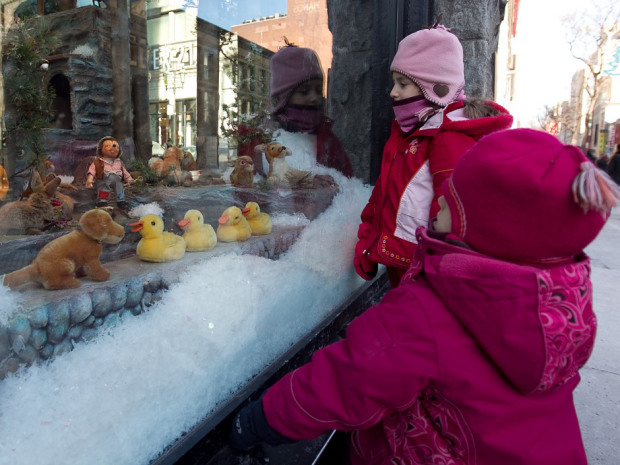 My granddaughters, finally, are old enough to just tell me what they want. One even emailed me links.

I do not love buying gifts. That’s an understatement. Shopping for others brings on a feeling of creeping paralysis that is quite unsettling. Department stores are the worst. It seems that the greater the selection, the scarcer the sales clerks. My challenge is to find and buy something before I am compelled to flee lest I turn to stone.

Buying gifts for grandchildren is no easier than for adults (I don’t count books as gifts). I am happier now that my grandchildren are getting older and have strong opinions on what they want for Hannukah. The other day, as per my request, my oldest Toronto granddaughter — now 10 — emailed me a list of what she and her two sisters wanted, with links directly to the products thoughtfully provided (not even close to the settled limit I had given her, for which they got brownie points). In mere moments I had purchased the designated Batman costume and the American Girl make-up kit, and sent them on their way. O brave new shopping world that was made for lazy and unimaginative souls like me.

It doesn’t seem right to have gifts delivered to my grandchildren here in Montreal, though. Luckily, my Montreal six-year old, Noa, who is all about feminine charm, princesses and sparkly self-enhancement, announced she had finally gotten permission to have her ears pierced. So this year’s Hannukah gift was a no-brainer. I told her that I would accompany her and her mother to the ear-piercing ceremony and then on to The Bay for her first pair of real earrings. This offer was accepted with genuine excitement. Since Noa would be doing the choosing and my daughter the driving (I also suffer from parking-availability anxiety), I felt none of my customary dread as the big shopping day approached.

The piercee is attended by two piercers at the same time, so both the excruciating anticipation of the pain and the pain itself are halved.

Ear-piercing is a serious rite of passage for girls. In the old days, you just dropped in to a jewellery store in the mall. Whoever was available pierced one ear and then the other.  Tears of pain and then relief rolled down your face, and off you went with a bottle of peroxide for twice-daily cleaning. It’s a far more sophisticated operation these days, at least in my daughter’s circle. My daughter booked a session well ahead at an upscale tattoo parlour called Adrenaline. There, I was informed, the piercee is attended by two piercers at the same time, so both the excruciating anticipation of the pain and the pain itself are halved.

I had never been in a tattoo parlour before. There were many interesting and colourful artefacts on display at Adrenaline, none of which would appear on my living person even if Hell did in fact freeze over, either because they were articles of clothing sporting seriously rude words, or because they were funkily decorated shoes with heels longer than my tibia, or because they were jewellery made to root in or dangle from parts of one’s body that are not one’s ear lobe.

Having arrived early, we settled ourselves in the waiting area and amused ourselves by riffling through the many samples of tattoo art on display. One binder featured a naked woman completely covered in garish tattoos. Shaking her head, lips pursed, Noa confided, “This is inappropriate.” “Indeed it is,” I agreed, and removed it from our presence. We then discovered a binder dedicated to flower and butterfly tattoos, which we both found more to our taste.

The piercing went pretty well, although not with the perfect simultaneity we’d expected. Still, Noa was quite brave, only crying for a few seconds, and taking rapid comfort from an immediately proffered lollipop. After so many weeks and months dreaming of this watershed event, one could see that she felt herself quite transformed by the sparkly minuscule studs. It was a sweet moment, and yet a strange place, emanating strong sexual vibes from every corner, for such exquisite innocence to shine.

The “real” earrings Noa chose from the serried racks at The Bay — tiny flowers — were a joy to buy and give. Let us hope that when she is 13, Noa does not ask to return to Adrenaline for a Hannukah present that I still consider “inappropriate.” Rather than comply, I would shop for something more befitting a granddaughter of mine until I turned to stone at The Bay.