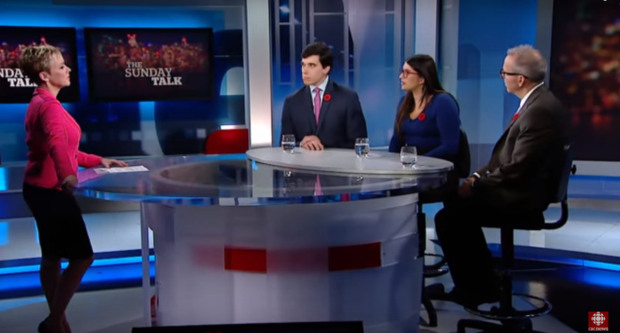 Barbara Kay: Anti-male ignorance on parade at the CBC

The personal is the political. I experienced a dose of both in the heated exchange on “The Sunday Talk” segment of CBC’s The National Nov 8. My son Jon was, as usual, on the panel, this time to discuss one of my niche subjects, men’s awareness groups, and their struggle for official recognition on several Canadian campuses. Watching, I reeled internally between maternal pride for Jon’s objectivity and incredulity at the politically-willed ignorance and prejudice he was up against.

The two opposing panelists were Buzzfeeed writer Scaachi Koul and lawyer Adam Goldenberg, both ardent feminists who approve denial of official status to men’s groups. But the reasons they gave were gobsmackingly subjective. “You don’t want to feed these trolls,“ Adam opened with. Startled, Jon asked on what ground he’d passed such a comprehensive judgment (“Am I a troll?” threw Adam a bit). That set the tone.

Scaachi opined that it “would make me nervous” to live “right next door” to a men’s group centre, as though any gathering of more than two men must be evidence of a patriarchal plot to commit some nameless horror on any passing female. These groups, she went on, have not formed out of a wish to discuss real male concerns, they have grown out of “anxiety about women having something to say.” They are “often a lot of straight white men talking to other straight white men about straight white issues.” Adam insists they are simply “out for attention,” although they should be allowed (unofficially) to “have their say,” upon which Scaachi jumped in with “But their say has been bad.”

Wow. Adam and Scaachi seem to know a lot for people who have obviously never met a men’s group member or been to a men’s awareness event. I have rarely seen such an exquisitely compressed display of arrogance, casually unsupported demonization and bullying self-satisfaction. Neither Adam nor Scaachi offered a remotely credible rebuttal to the list of concerns Wendy Mesley read out as the entirely legitimate topics of concern for which men’s groups seek information and support: high male suicide rates, boys’ education, family law bias toward mothers, due process in alleged crimes against women, and men’s specific health issues (and fatherlessness should have been on the list).

Jon pushed back hard, and with reason — their claims were “projections,” he rightly pointed out, not facts — and then he pushed back with appeals to fairness and, when these failed to make a dent, well-deserved sarcasm. But the two ideologues ploughed blindly forward, making up in evangelical fervour what they lacked in logic or objectivity. Finally, Jon summed it all up beautifully when he responded to Adam’s escalatingly desperate ramblings with, “Everything you’ve said is ridiculous.” And it was.

What viewers witnessed in microcosm in those 12 minutes is the despotism of the left exercising its tyranny over straight white males, the only group in Western culture upon which any and all collective slanders may be heaped with impunity. If directed at women (except for Christian pro-lifers), blacks, aboriginals, Muslims, or gays, some of the erroneous claims Adam and Scaachi adduced as settled truth would be deemed hate speech.

The greatest whopper of the segment, responding to the issue of “due process” that men rightly feel is denied them by campus tribunals judging rape claims, was Scaachi’s airy denial that women ever lie about their victimhood. Women lie frequently, have been proved to lie frequently, and as Jon pointed out, Americans have seen a growing list of lawsuits — some successful ones resulting in seven-figure payouts by the respective universities — launched by young men whose education, future careers and social lives have been thrown into jeopardy by demonstrably false allegations of rape.

Civility is our watchword, even when our events are disrupted or shut down by protestors screaming hateful slogans and vandalizing property

For the record: I sit as one of several women on the advisory board of a responsible men’s educational and support group. I have spoken at their events. The board is politically non-partisan, contrary to Adam and Scaachi’s belief that all men’s groups are “conservative.” The group is also diverse in terms of members’ cultural provenance and sexuality. Nobody in the group expresses hostility to women. The talks we sponsor are informative, well-researched and intellectually stimulating. Civility is our watchword, even when our events are disrupted or shut down by protestors screaming hateful slogans and vandalizing property.

To be fair to Scaachi and Adam, they come by their uninformed, misandric views honestly enough. It’s systemic, part of the cultural air we breathe. White male privilege? Former Liberal cabinet minister Hedy Fry, responding to the criticism that there are no funded resources for male victims of domestic violence, took offence, riposting that she was perfectly willing to fund any program that had “a clearly demonstrated benefit to women.” Hedy, say hello to your love children, Adam and Scaachi.