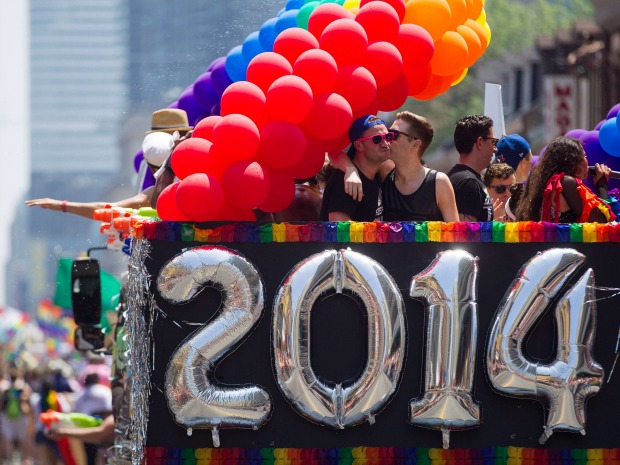 Pride is supposed to be about justice and equality, but bows to militant feminist dogma.

The blow fell too late for a counter-punch. But that seems to have been the idea behind Pride Toronto’s arbitrary ejection of the Canadian Association of Equality (CAFÉ) from Sunday’s parade just days beforehand, leaving no time for appeal of the decision.

The annual Pride event in Canada’s biggest city is supposed to be a celebration of all things and causes relating to gay culture and, more broadly, to formerly marginalized sexual identities. It’s supposed to be a big tent. But as the treatment of CAFÉ shows us, only those groups with a politically correct agenda are seen as acceptable.

According to its own policy, Pride Toronto doesn’t permit cancellations after June 21 — thereby ensuring that groups have an opportunity to respond to complaints lodged against them. CAFÉ, which has charity status (giving them more legal standing than most of the other participating groups), took part last year without incident and had two months ago successfully registered to walk this year, their name appearing in official Pride literature.

CAFÉ was given no substantive reason for the rejection, just a note from the Pride organizers: “It has come to our attention that the work of your organization may contravene the spirit of the mission, vision, and values of Pride Toronto and WorldPride.” And that was it. Their right to march was withdrawn. At a stroke, CAFÉ was lumped in with pedophilia-promoting groups such as Men Loving Boys Loving Men, the only other type of group I could find to have been spurned by Pride as inconsistent with its mission.

Pride is supposed to be a big-tent event. But as the treatment of a men’s-rights group shows, left-wing activists have a veto on who gets to march

Although CAFÉ’s broad mandate is freedom of speech, much of its activity has focused on raising awareness of men’s issues — including those that affect, say, the right of gay men (and all men) to have equal parenting rights under Canadian law. But feminists regard any such advocacy as a threat to their dogma. And so feminist activism, occasionally aggressive, has attended almost every men’s rights speaker sponsored by CAFÉ on Canadian university campuses. (I was one such speaker two years ago.) It therefore isn’t much of a stretch to infer that CAFÉ was booted from Pride because of the complaints of militant feminists.

For those who follow Pride politics, a certain irony leaps out here. The Ontario English Catholic Teachers Association marches, even though affiliated with some gay-alliance-unfriendly Catholic schools. More controversially, Pride defends the presence of the anti-Zionist group Queers Against Israel Apartheid, perceived as an outright hate group by many Jews, not to mention by many non-Jews, who can see that QuAIA’s mandate has nothing to do with Pride’s objectives (and in fact makes a mockery of them in focusing negative attention on the only gay-friendly nation in the Middle East).

This incident could not have been more personally ironic from my perspective. I have just returned from the world’s First International Men’s Rights Conference, sponsored by A Voice for Men (AVFM), held in Detroit. The range of topics addressed included paternity fraud, custody iniquities, the astronomical suicide rates amongst military veterans, the absence of resources for male victims of domestic abuse, and the “boy crisis” in education. (I myself spoke on misandry in the media.)

Everything went swimmingly. But the fact that it took place at all was a triumph of resourcefulness and determination. For, just as CAFÉ was sideswiped by feminist protest at the last minute here in Canada, so was AVFM. The Doubletree Hilton hotel, the conference’s venue, received threats from feminist activists. Reflexively, the hotel imposed unmeetable conditions on organizers, and another venue had to be found on short notice.

AVFM was luckier than CAFÉ. Hats off to the Veterans of Foreign Wars Association of St. Clair Shores, Michigan, for their warm and cooperative hosting of the conference.

The Detroit protesters did win one battle in the sense that they imposed a great deal of inconvenience on participants (constant shuttling between motels and the venue), not to mention $10,000 for a police presence that wasn’t necessary, since the protesters’ objectives of causing financial and logistical hardship had already been achieved.

The feminist revolution began as a fight for equity reform in law, education and career opportunity. Those objectives were quickly achieved. But as in all revolutions, justice is never enough for the true believers; for them, the revolution is never over until all dissent from their dogmas is squashed.

And so the purges begin. In this case, the Detroit attempt gave strength to the counter-movement. But in Toronto, CAFÉ was sent to the guillotine, while feminists’ knitting needles flashed in the hot summer sun.