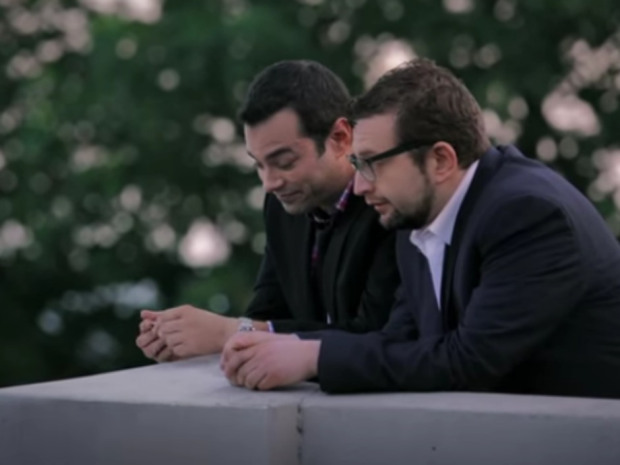 A fresh Quebec comedy duo is channeling the very best of Jewish humour ... literally. They're doing all the sketches in Yiddish.

Languages! Here today, gone tomorrow. Not English, of course, here forever (although I bet the Romans said the same thing about Latin). Unofficial languages spoken by small populations are fragile, though. Take, for example, a Croatian language, Dalmatian. Well, you can’t actually; it’s officially dead. See what I mean?

Yiddish is allegedly a dying language, though it’s taking its sweet time about it. Before the Holocaust, Yiddish was spoken by 10 million Ashkenazi Jews. Once the Yiddish-speaking survivors emigrated, they or their children adopted the languages of their new countries. In Israel, Yiddish was frowned upon as the language of victims; European Jews were pressed into fast acquisition of Hebrew, the only Jewish language fit for a sovereign people.

I’m a typical second-generation diaspora Jew. My parents spoke Yiddish, but didn’t pass it on. Who needed it in this brave new world? But they still used it as their “secret” language for stuff they didn’t want us to understand, so I took in rudimentary vocabulary by osmosis and high-school German.

In Montreal, which has a particular Jewish-immigration history, there is a Yiddish theatre and feeding it an entire K-11 secular day school stream – Jewish People’s and Peretz Schools elementary school and Bialik High School – where Yiddish is obligatory and students emerge with near-fluency. Many graduates today are the grandchildren of Montrealers I met when I moved here over 50 years ago. I was shocked then to find they were just like me, except their mother tongue was Yiddish.

But genug shoyn (enough already) about me. It’s Hannukah. The world is gloomy. You want to feel freylekh (festive). You’re looking for some farvaylung (amusement). Have I got a shidekh (match) for you! Reader, meet Eli Batalion and Jamie Elman, a.k.a “Leizer” and “Chaimie” of Yidlife Crisis, a highly original Montreal comedy team who’ve built up a solid fan base through their quirky and often hilarious Internet sketches (YidlifeCrisis.com).

What’s unique is that Elman and Batalion, unsurprisingly graduates of JPPS and Bialik, work almost entirely in Yiddish with English subtitles. There’s definitely something weird about seeing two young, completely integrated Canadian guys – Jamie the atheist secularist, Leizer the ambivalent traditionalist – nattering away in Yiddish, a language now only used as a default by the ultra-Orthodox. But once you get used to it, it works.

The invariable format has these best friends and intellectual adversaries in Talmudic-style debate about “life, love and lactose intolerance.” They’re always eating – some ethnic specialty like Chinese, sushi, souvlaki, or cruising a groaning table at a bris (circumcision), where they agree that party sandwiches are “Jewish and goyisch at the same time” (so true!) – while they hold humorously forth on various social and cultural intra-tensions amongst Jews like themselves, and various inter-tensions between Jews and other cultures.

Since most of the sketches are set in Montreal, the interplay between anglo Jews and francophones produces good fodder. In one episode, set in a restaurant famous for poutine, Leizer orders his – normally poutine consists of French fries topped with cheese curds and gravy – with the gravy “on the side.” The francophone server regards him with incredulity. Instantly intuiting Leizer’s logic – although lapsed in religious observance, Leizer, like many Jews straddling old and new worlds, is Jewishly squeamish about seeing the beef gravy (fleishig) and the cheese (milchig) touching each other – Chaimie rolls his eyes and mocks him as a “poutine separatist.

Yidlife Crisis has a fan in comedian Mark Breslin, CEO of Yuk Yuks, a Montreal stand up comedy club, celebrating its 40th anniversary in 2016. Yiddish is an intrinsically funny language, Breslin says, because the best humour is aggressive, and Yiddish is certainly that. Jewish history produced a language rich in tropes exuding angst, irony and bitternesss, but one equally evocative of the sweetness of life in scarce good times. Successful Jewish comedians like Jackie Mason and Larry David may be speaking English, but they are channeling a Yiddish sensibility. Batalion and Elman, Breslin says, are “reinvigorating the tradition of Yiddish humour by making it modern.” You’ve seen Little Mosque on the Prairie? If Yidlife Crisis were a TV series, it could be “A shtiebel (little house) in Rivière des Prairies.”

Yidlife Crisis humour can be somewhat edgy (a debate between them on circumcision will offend some Jews) and naughty; but it is thankfully never kitschy, schmaltzy or truly *shmutzadik* (“dirty”), laugh-killing frontiers for me personally. By the way, neither of these talented, amiable boychiks (young men) is married, and both are open to possibilities. I’m a shadchanit (matchmaker) by nature, and have offered to broker a match pro bono. Yiddish an asset, but inability to speak Yiddish not a deal-breaker, they tell me. Nu, meydlakh (girls)?