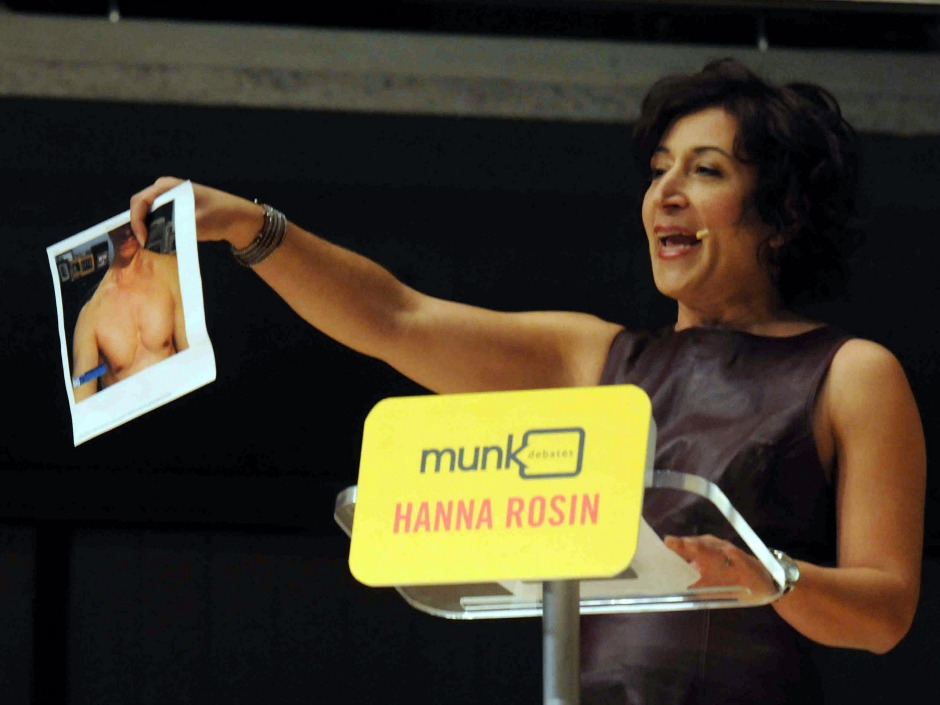 Barbara Kay: ‘Be it resolved we live in a misandric society’

Hanna Rosin at Roy Thomson Hall for the November 15, 2013 Munk Debate on the "end of men."

Yesterday, November 19 was International Men’s Day, a fitting moment for the announcement that Canada’s first Canadian Centre for Men and Families (CCMF) will open next spring in Toronto. The CCMF will serve as a dedicated venue for the discussion of issues that affect men in particular – such as fatherlessness, declining enrolment in universities and increasing male suicide rates – subjects that are not usually taken up in “Gender Studies” (whose neutral name belies the reality that it is simply Women’s Studies rebranded).

So far the Canadian Association for Equality, has raised $50,000 for the project. They’re hopeful the centre will become a “template” for other universities, such as York University, the University of Waterloo, Wilfred Laurier University and the University of Guelph, all of whom have expressed interest.

Feminists talk the talk about gender “equality.” Yet, even though women’s centres have been a common feature of university life since the 1970s, many feminists are antagonistic to the very notion that men might need their own centres. As the FAQ page on the women’s centre website at Simon Fraser University (where feminists have protested allotting funds for a men’s centre) puts it, “What is the men’s centre? The simple answer is that the men’s centre is everywhere else.”

The simple response to that statement is that “everywhere else” is not a “place” men with problems directed related to their maleness can go to discuss them. They need an actual space to meet.

But the real meaning behind “everywhere else” is the feminist premise that the world is made up of the powerful and the powerless. Whatever advances women have made in terms of legal parity and career opportunities, the essential paradigm of powerful males and female victims still holds.

That perspective is old and tired. The areas in which men are disproportionately represented are rapidly shrinking. It is true that there are more male than female CEOs, more male partners than female partners in legal firms, more male than female (hard) scientists and more male politicians in high office than female. But as countless studies have shown, much of the disparity in these domains is due to self-selection by women seeking work-life balance. There are virtually no areas of career or public life from which women with ambition are now purposefully excluded.

Set against the many sectors in which women are equally or disproportionately represented – as students in higher education, in white-collar work of all kinds, in the professions of law, medicine, pharmacy, veterinary science, psychology, social work, teaching, journalism, publishing, and the list goes on – it is churlish of women to complain about the 1% of life in which men (so far) are employed in greater numbers.

One thing feminists cannot complain about with a straight face is a lack of respectful public attention for women’s issues. Last week the prestigious Munk Debates mounted an event around “the end of men.” Four well-known women writers debated the resolution, “Be it resolved that men are obsolete.”

Can you imagine a public debate on whether Muslims, natives, or even sharks and polar bears are worthy of continued existence? No. Only men are accorded that dubious honour. Although by most accounts – certainly those I talked to who attended – it wasn’t even entertaining. Montreal radio talk show host Supriya Dwivedi tweeted, “I was [at the Munk debate] and was speechless at how ridiculous it was.”

The question is, who should be more offended by the debate?

Women, because the organizers thought it had to be all women pundits, because even brainy women are too fragile intellectually to duke it out in a real debate with respected masculinist participants like Harvard University professor Harvey Mansfield, author of the 2006 Manliness or male-rights activist Warren Farrell?

Or men, because it was clear that victory for the feminist side was a foregone conclusion (as indeed happened), and that male-bashing as an evening’s entertainment is not only permissible, but the kind of performance theatre our chattering classes will pay good money to see?

I can’t think of a better topic for discussion at, say, a men’s centre. Moreover, if the Munk debate committee would like to arrange a debate around the proposition, “Be it resolved we live in a misandric society,” I am available.