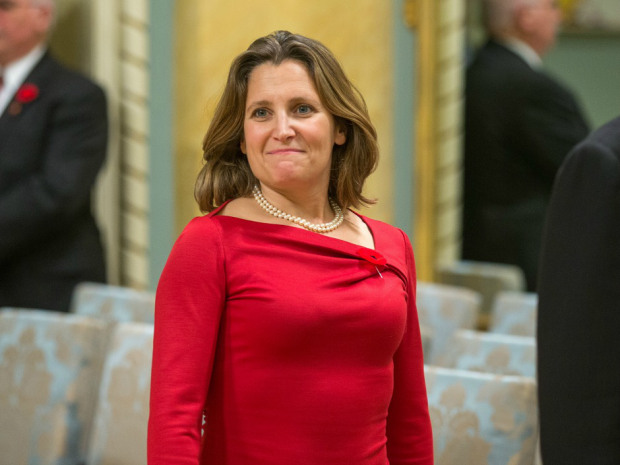 You could almost see alarm bells ringing in her brain: 'These questions are offensive to Muslims! Abort! Abort!'

Chrystia Freeland, Canada’s Minister for International Trade is, generally speaking, a smart cookie. But that wasn’t my takeaway from her performance as a guest panelist alongside Maine governor Angus King and The Federalist publisher Ben Domenech on the Bill Maher “Real Time” show that aired last Friday. Maher made Freeland look, well, less than smart, without even breaking a sweat.

The segment, whose subject matter included ISIL, refugees, national security and Islam, has gone viral. Freeland’s wince-making exchange with Maher is worth watching, because it succinctly demonstrates the cognitive dissonance multiculturalists are forced to adopt in defending policies that ignore values gaps between cultures. In brief, what one sees is Maher exercising his politically autonomous intelligence to state the obvious, and Freeland exercising her politically shackled intelligence to deny the obvious.

Maher took his controversial plunge with typical candour: “I think that Islam is a problem.” He was scrupulously careful, as he has been previously, to distinguish between criticism of Islam and criticism of actual Muslims, as well as to distinguish between the “boutique Muslim experience” of generally successful cultural adaptation in America and the “everyday terrorism” of many Islam-dominated countries: “I’m talking about the wife whose husband who can beat her with impunity. The gay person who, if it comes out, will be put to death … The intellectuals who would like to speak out … I don’t know why liberals can’t stand up for those people.”

Maher went on to blast multiculturalism: “this idea that somehow we do share values that all religions are alike is bullshit, and we need to call it bullshit.” That galvanized Freeland who “now more than ever” called for respect for “diversity,” because — here’s where she lost the thread — “we in Canada are not going to say Muslims are worse than Christians, or are worse than Jews, or worse than atheists.” Maher shot back, “Not as people, the ideas are worse.”

Maher and his other guests were keen to talk about those ideas, but Freeland just couldn’t bring herself to go there. You could almost see alarm bells ringing in her brain: “Offensive to Muslims! Abort! Abort!” It was as though an automatic pilot had overridden her manual controls. Unable to engage, she remained doggedly on script: “it is incredibly dangerous, and very wrong, to … say there is something wrong with being a Muslim,” which nobody on the panel had said; in fact, both King and Domenech spoke sympathetically of Muslim victims of jihadism.

Finally — and it was kind of funny/sad to see her incredulity — the penny dropped, and she asked, “Are you guys saying the Muslim faith is by definition worse than other people’s?” Maher answered, “Yes, the ideas.” A troubled Freeland, one could see, felt way out of her Canadian comfort zone. She flailed, accusing Maher of “demonizing” Islam. Maher retorted: “I’m not demonizing, I’m just reporting. You are making it a demonization.”

And so it went. Soothing multiculti platitudes that would have had CBC’s Peter Mansbridge gravely nodding agreement weren’t doing the trick with Maher. He just kept lobbing disturbing statistical grenades at Freeland, such as Pew polls that put support for honour killings, even in moderately Islamic Indonesia, at 18 per cent. Lamely, Freeland bunted with the Bible’s “an eye for an eye.” “Well, we don’t listen to the Bible,” Maher crisply returned.

Back to the wall, Freeland attacked the validity of opinion polls, implying that if real research were done, it would find support for honour killing was equally distributed over all cultural groups. At that point I was watching through splayed fingers and murmuring to myself, Chrystia, Chrystia, please just stop.

Freeland was obliged to channel her boss Justin Trudeau’s beliefs and policies, no matter what her personal views are, so there was little else she could do

Clearly Maher (as well as King and Domenech) and Freeland were talking past each other. The American panelists, intellectually marinated in First Amendment rights, understood that while it is wrong to defame any faith group collectively (like, say, “Muslim men hate women”), it is impossible under U.S. law to demonize an idea ( “Sharia law is misogynistic”). But Western progressives, splendidly represented by Freeland, no longer grasp the distinction. They have internalized the pernicious, anti-democratic, dangerous notion of “Islamophobia” — the very concept was invented and promoted by stealth-jihad strategists — which interprets as defamation criticism of Islam itself.

To be fair, Freeland was obliged to channel her boss Justin Trudeau’s beliefs and policies, no matter what her personal views are, so there was little else she could do (and anyone representing the Obama administration would have done the same; Obama has never once used the word “Islamist” to describe an act of Islamist terrorism). Nevertheless, referencing the words of Asra Nomani, a moderate Muslim woman activist he champions, Maher wasn’t wrong when he reproved Freeland with “people like you are the problem, because they close off a debate that we need to have.” Just so.