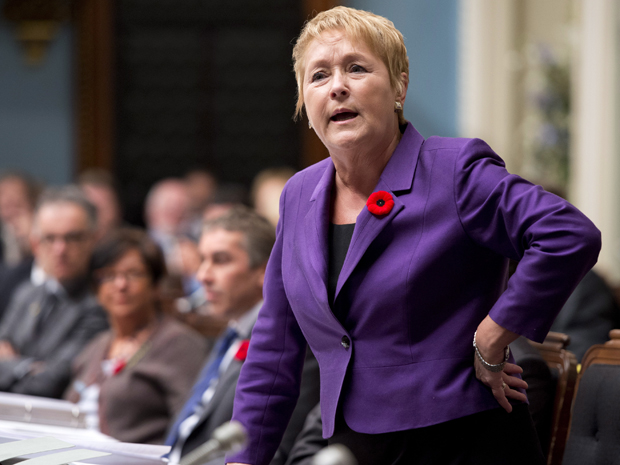 But enough already about the U.S. elections. Instead, let me tell you about the 90 minutes that I spent two weeks ago taping a one-on-one interview with Montreal public-affairs journalist Richard Martineau, for his TV show Francs-tireurs (Sharpshooters), to air tonight on TéléQuébec.

Martineau invited me on his show to defend my Sept. 28 National Post column, in which I predicted dark days for Quebec anglos. I said Premier Pauline Marois’ playing of the specious “French is threatened” fear card during her campaign had led to unprecedented hostility to the very sound of English in public.

My French is functional, but not fluent. And I knew Martineau was a tough interrogator. More worrying, language rights is a sound-bite minefield.

In the end, I enjoyed myself. Martineau wasn’t nearly as scary as anticipated, and my righteous indignation compensated for my occasional vocabulary stumble.

French, I argued, isn’t threatened in Quebec. Recently released census language data show a slight decline in French as the mother tongue of Montreal islanders. No surprise, considering the high rates of immigration. But there is no decline in French as the language of civic reciprocity. Au contraire. Absolute numbers of Quebecers who know French have increased by nearly 350,000 province-wide, and 175,000 in the metropolitan area.

I had four points I was keen to get across, and if memory serves, I did.

First: English is an official language. That shouldn’t be a controversial point to make, yet some Marois supporters treat it as such. Suppressing the public expression of English is to language rights what the niqab is to gender rights.

Second: For anglo-Quebecers, English is a crucial part of our Canadian cultural identity, and deserving of acknowledgement and respect by *all* Canadians, even by those Québécois who believe their sovereigntist beliefs give them the right to act as though they are not Canadian.

Third, English is and always has played a critical role in Montreal’s commercial success. Moreover, Montreal, a major Canadian and international city, is a “distinct society” within Quebec, bilingual from its beginning. Therefore, to eliminate English in Montreal would be an act of Orwellian historical revisionism. “Who built this great city?” I asked Martineau. It was the English and French together. Who built and supports its great cultural institutions, hospitals, charities? Both the English and the French, and now other non-francophones. Montreal *belongs* to us as much as to ethnic québécois.

And fourth: Anglophobia exists amongst hard-core separatists, Marois’ base, and it is getting worse. The clear intention to suffocate English in Montreal’s public spaces is casting a pall over the social climate.

Martineau mocked my fears of escalating anglophobia, but since we taped that show, there have been more incidents of verbal and physical aggression against anglophones by francophones.

Martineau and I clashed over Bill 101, which Marois wants to extend. Martineau reacted strongly to my statement that Bill 101 was an anti-democratic law to begin with. Of course, it is anti-democratic. It’s fair to force immigrants into the French stream. But Bill 101 treats Canadians from outside the province as though they were immigrants from Kazakhstan, and not fellow citizens of the same country.

Once the anglophobes are permitted to flout democracy, the goalposts keep moving. The education minister plans to remove English — which she perniciously alludes to as a “langue étrangère” — from the early years of the school curriculum. Which is to say, English is to be considered a *foreign language* in Quebec. This is anglophobia writ large. The PQ’s intention is clearly the linguistic cleansing of anglophones to pave the way for a referendum with “winning conditions.”

Martineau gave me a hug at the end of the taping, announcing to the cameras that I am “the most controversial [female] columnist in Canada.” Wow. In my wildest dreams I never thought I would be considered a controversial figure simply for stating that throughout the nation of Canada, all Canadians should have equal rights to be educated and to socialize in the official Canadian language of their choice.