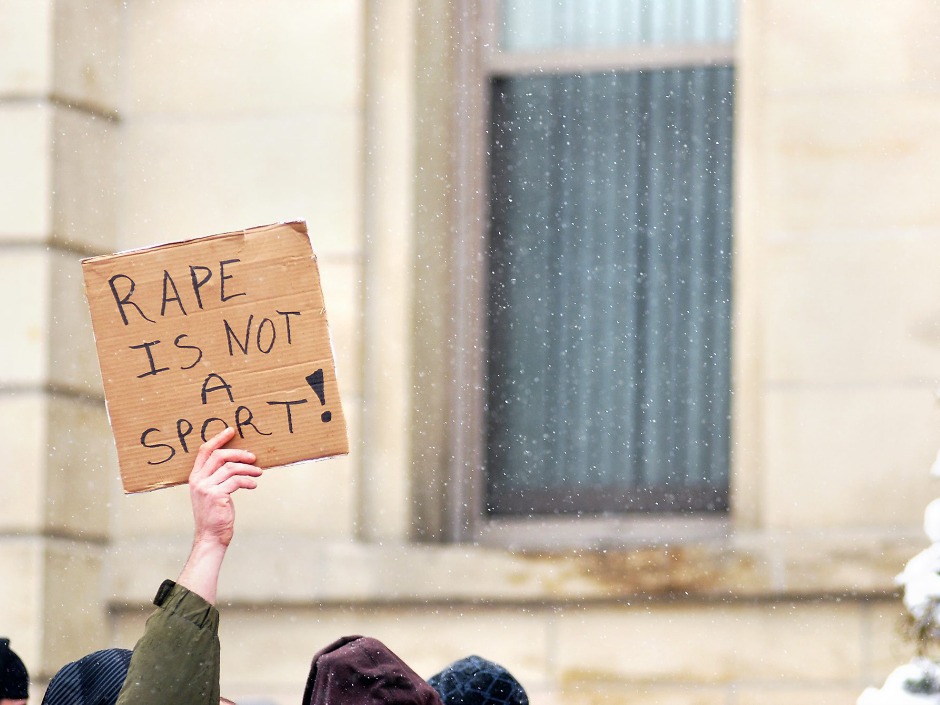 On-campus support groups for men are being attacked for 'defending rape' by the usual feminist suspects.

In alarmed response to emerging “men’s rights awareness” groups (MRA) on a number of Canadian campuses, the Canadian Federation of Students (CFS), a union body representing some 500,000 students, seeks to amend its “Sexual Assault and Violence Against Women on Campus” policy.

What nonsense! The actual benign nature of MRA groups, where both sexes are welcome to discuss male-centred concerns, can be seen in a publicity campaign video of a relatively new organization, which has become a lightning rod for anti-male activism, the Canadian Association for Equality (C.A.F.E.).The video, titled “Support the Men’s Centre Campus Campaign”, was posted to YouTube on C.A.F.E. channel, EqualityCanadaTV. In it, various young actors, male and female, calmly address the viewer, explaining “their” reasons for appreciating campus men’s centres: genetics-inspired fears of early prostate cancer; help for gays dealing with bullying; worry over disproportionate male unemployment; troubling high school dropout rates amongst boys; the impact of fatherlessness following unfair custody decisions.

If passed, the CFS amendment would endorse official opposition to events “whose purpose is to frighten, intimidate, and/or target women students on campus:” as interpreted by CFS, that means any event addressing any male concerns.

The first few events took place without incident. True, my Feb., 2012, talk on family court bias against dads was attended by antipathetic feminists tweeting furiously throughout (#feministbashingparty), and the Q&A was, shall we say, animated. But it did not descend into the ugliness that accompanied the three following events, when the adversarial River Bile overflowed its (left) bank.

Warren Farrell, a Financial Times Top Thought Leader and former Board member of the National Organization for Women, gave a talk at the University of Toronto last November, his innocuous topic the declining success of boys. Yet he was greeted with an inflamed mob representing the whole leftist spectrum: the Socialist Worker Canada with support from CUPE, the University of Toronto Students Unions and the Ryerson School of Social Work.

You can get the flavour of the virulence in a Nov., 2012, YouTube video titled “university of toronto feminist protest 4/4/2013″, where a woman protester, apparently not the least bit “frightened” or “intimidated,” berates those attending the event. It’s known as the “Shut the f–k up” video. You’ll see why.

Angry protesters tried to shut down the event by barricading entrances and exits in contravention of safety codes. Video footage has a spokeswoman asserting event organizers “defend rape, they defend incest, they defend violence against children,” obscene canards all.

C.A.F.E. has been scrupulous in presenting objective, non-inflammatory polemicists of impeccable civility

Setting themselves up as arbiters of acceptable discourse, protesters lied to incoming people, insisting the event had been cancelled. Attendees, men and women alike, who told protesters they merely sought fodder for an informed opinion, were harassed with equal venom.

The evening was a disgrace to the principle of free speech all reasonable Canadians uphold. Since then, two more C.A.F.E. events have required police intervention to handle similar shenanigans, including the ringing of fire alarms and shouting over speakers of the utmost respectability. One was Janice Fiamengo, a thoughtful, soft-spoken English Literature professor at the University of Ottawa, the others were McGill University academics and writing partners, Katherine Young and Paul Nathanson.

Fiamengo spoke from an evidence-based perspective about the inherent man-blaming premises of Women’s Studies, a domain she knows intimately. Young and Nathanson gave a dignified, highbrow talk, “From Misogyny and Misandry to Intersexual Dialogue.” (Their exhaustively researched series of books — Spreading Misandry, Legalizing Misandry and the upcoming Transcending Misandry, invaluable sources for me — are nonpareils of responsible scholarship and lucidity.)

In other words, C.A.F.E. has been scrupulous in presenting objective, non-inflammatory polemicists of impeccable civility (even I behaved myself), all unequivocally committed to gender equality. None hold radical or more than mildly controversial views. By contrast, those protesting their appearance have been immature yahoos, displaying truculence, duplicity, ignorance and boorishness.

If they’d listened instead of protesting, those angry activists might have come to appreciate men’s viable concerns. But acknowledging men’s humanity is ideologically untenable for extremists. It’s sleazier, but easier to keep screaming, “Shut the f–k up!”