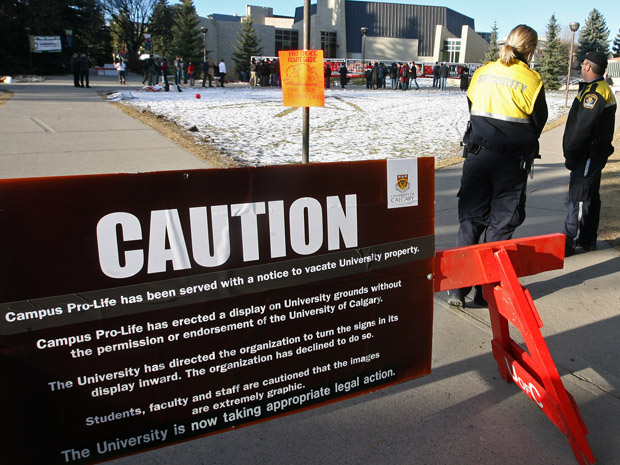 The University of Calgary opposed the Campus Pro-Life protest held on campus grounds.

Amidst the deluge of Twitter postings around the Lindsay Shepherd affair at Wilfrid Laurier University, a Nov. 23 tweet struck me for its hutzpah: “In all of the media frenzy over #LindsayShepherd and #JordanPeterson, has anybody asked how young, vulnerable, often marginalized trans students of #WilfredLaurierUniversity (sic) feel?”

Hutzpah, because the tweet’s author was quondam happy Catholic warrior Michael Coren. I tweeted back: “Has anybody asked how young, vulnerable, often marginalized pro-life students at any Cdn university feel? Remember them?” But that was then, this is now. With his field of vision narrowed by his new social-justice lens, Coren can apparently only see progressive-sanctioned victimhood.

In my observation, whatever their experiences off-campus, the least “vulnerable” and “marginalized” people on campuses today — if we are using those words in a systemic sense, as we must, if we are to make group comparisons — are those in the trans community. Their professors, the administration and equity officers are falling over themselves to make life “safe” for them. We saw proof of that in the Maoist “struggle session” Lindsay Shepherd experienced. Her interrogators demonstrated that they consider “transphobia” to be an egregious thoughtcrime.

By contrast, if systemically “vulnerable” and “marginalized” students on campuses are what you seek, look no further than the approximately 30 pro-life clubs active in Canadian universities. According to Ruth Shaw, director of the National Campus Life Network, an organization that helps to create and sustain pro-life clubs, about 90 per cent of them have at one point or another experienced “institutional censorship.”

By institutional censorship, she means one or more of: a loss of official status; a failure to gain status; indifference to, or passive encouragement by authorities of disruption or forced cancellation of events; delays in allocating space tantamount to preventing them, or outright refusal; grillings by the student union on “tabling” content or anticipated presentation (demands not made on other groups); allocation of difficult-to-access locations for events; and passivity in the face of mockery, ridicule and even downright bullying of pro-life advocates at their events.

An ongoing case in point:

Early in October, the University of Ottawa group Students for Life (SFU), which has been a registered campus club for 10 years, applied for renewal of its status from the Student Federation of the University of Ottawa (SFUO), receiving it on Oct. 13. A week later, SFUO sent them an email stating the SFU had been removed from the SFUO Clubs system “due to the ways in which your mandate is in contention with the SFUO’s principles (of anti-misogyny, sexism, etc).”

Recognition of club status is crucial to their activism

Without SFUO status, students cannot reserve space or access resources available to other clubs. So recognition of club status is crucial to their activism. Apprised of the situation, the Justice Centre for Constitutional Freedoms (JCCF), on whose board I sit, sent a letter to the SFUO stating that the SFUO’s discriminatory decision “violates the principals of natural justice, SFUO’s own Constitution and policies, and the fundamental Canadian values of freedom of expression and association, which are crucially important at academic institutions.” The letter urged reinstatement of SFL’s official status no later than Nov 3.

Instead, on Nov. 5, the SFUO passed a motion declaring they are a pro-choice organization, giving themselves moral licence to deny status to SFL (they also declared themselves a pro-Palestinian organization, which gave them licence to deny status to Jewish clubs like Hillel, an aside here meant only to illustrate the simple undemocratic tactic by which any politically incorrect opinion can be officially demonized).

We’ve been here many times before. Student unions/federations are considered to be independent of the universities in whose bosom they reside. They can do what they like without consequence, because obligatory fees are levied to support them. Pro-lifers are therefore in the classic colonial position of being taxed without representation. The SFUO and its ilk elsewhere are, literally, despots.

We have been here many times before

And despots now supported by a legal precedent. Last April, in The BC Civil Liberties Association and Cam Côté vs. University of Victoria, the B.C. Court of Appeal dismissed students’ arguments that the Charter of Rights applies to public universities, ruling that public, taxpayer-funded universities are not government entities, and are not implementing government programs. Still, according to a JCCF posting, the court “has left the door wide open to accepting, in future court cases, that universities are bound by principles of administrative law, which require them to treat all students equally without discriminating on the basis of students’ beliefs.”

A Toronto Star editorial on the Lindsay Shepherd story observed: “Shepherd’s ordeal underlines why it’s so important to safeguard the role of universities as places that provide the maximum possible opportunity to exchange ideas and as spaces for those who would challenge conventional wisdom.”

Well said! I look forward to a subsequent editorial championing the right of pro-life clubs to express their opinion on university campuses without fear of censure or obstruction.