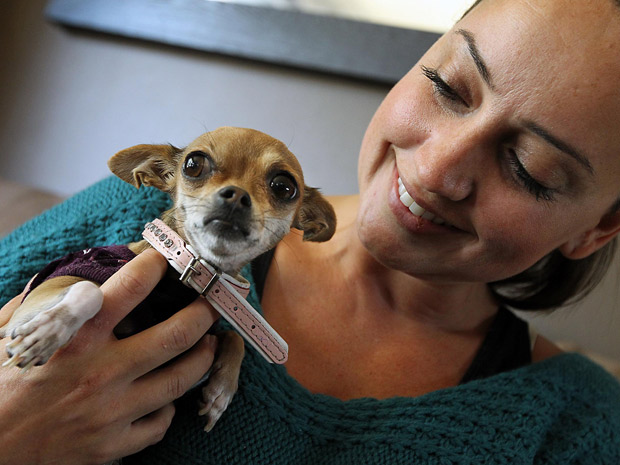 Mitzie Scott and Molly the chihuahua

A Windsor, Ontario licensing commission has unanimously voted to have a 3-pound Chihuahua declared a “dangerous dog.” Molly, the canine mite in question, is accused of nipping a postal worker after escaping from the yard of its owners, Jason and Mitzie Scott. According to Mr. Scott, the bite was not serious enough to prevent the worker (who allegedly refused Mr Scott’s offer of a bandage) from continuing on her rounds.

A “dangerous dog” designation has…er…teeth. It means the Scotts must obtain one million dollars’ liability insurance and must henceforth have the microscopic canine leashed and muzzled at all times in public, even though it is unlikely they will find a muzzle small enough to fit Molly. They must also post “conspicuous” signs on their property reading “WARNING: Dangerous dogs on premises.” And furthermore, Molly must be microchiped to identify her dangerous-dog status.

The bylaw is ridiculous. As the city deputy licensing commissioner pointed out, any dog that causes injury to a person or other domesticated animal in Windsor must be deemed dangerous. But bylaws are not generally enacted to address statistically insignificant incidents that are irrelevant to public safety as a whole. There is a big difference to public safety in a puncture wound requiring antibiotic cream and statistically significant fatal or near-fatal incidents of mauling by a fighting dog that is genetically programmed for impulsive aggression and a high prey instinct.

There is a reason that the Windsor bylaw is so lacking in the kind of specific that would actually target and diminish the depredations of truly dangerous dogs. Advocates for fighting breeds like pit bulls campaign fiercely to persuade city commissioners that “all dogs bite” and one should “blame the deed, not the breed.” They use the language of human rights (which can only apply to individuals, not to line-bred dogs), saying it is “discrimination” to single out one breed over others. They can be quite relentless in their organized campaigns, and often wear down city commissioners, who buy into their myth that there is no such thing as a bad dog, only a “bad owner.”

But there are “bad dogs” that are bred to be bad dogs: dogs that have never been bred for anything else but the infliction of pain and suffering on other animals or people. And we know which ones they are. Far and above all other dogs, pit bulls and their close kin Rottweilers represent the overwhelming share of the kind of biting that is a true public safety issue. Pit bulls and Rottweilers are 11 times more likely to attack an animal or another human than the average dog. Pit bulls have represented half the total actuarial risk for injury since 1982. Add in Rottweilers and it is 75% of total actuarial risk.

There is a reason pointers “point” and retrievers “retrieve” without training. The instinct has been continually reinforced by breeding. Apart from bull, bear and dog fighting, the pit bull’s ancestors have been used to track down slaves, to bait and hunt dangerous wildlife or to act as butchers’ dogs, whose job was to incapacitate movement in animals by clamping down on their noses while their throats were cut. In each case, according to Merritt Clifton, editor of Animal News magazine, “these ancestor dogs [were] bred to expand the human capacity for inflicting suffering on other animals, including the dogs themselves.”

The distinctive feature of all these dogs is the “killing bite,” which, unlike the transient “grabbing” bite of the German Shepherd or the “slashing” bite of the Collie, is designed to inflict horrific damage. The killing bite seizes on a limb or a child’s scalp or face and does not let go, while the teeth rend through the flesh and bone. You would not wish to see photographs of people (especially children) who have been subjected to a pit bull mauling. They are sickening.

As Dr. Patrick Byrnes of John Hopkins Medical Center says, regarding pit bull injuries he has treated, “I can’t think of a single injury of this nature that was incurred by any other species other than a pit bull or a Rottweiler.” Because of these dogs’ uniquely damaging attack methods, Dr. Byrnes says surgeons have actually had to develop new techniques to try to mend them.

The Chihuahua is not in my opinion the kind of dog I would own. From what I understand, their temperament is not particularly sunny and relaxed. But I have no reason to fear serious damage by them, and neither does any one else. Molly the Windsor Chihuahua is a perfect example of why dangerous-dog laws that do not target the real canine threats to public safety are a farce.