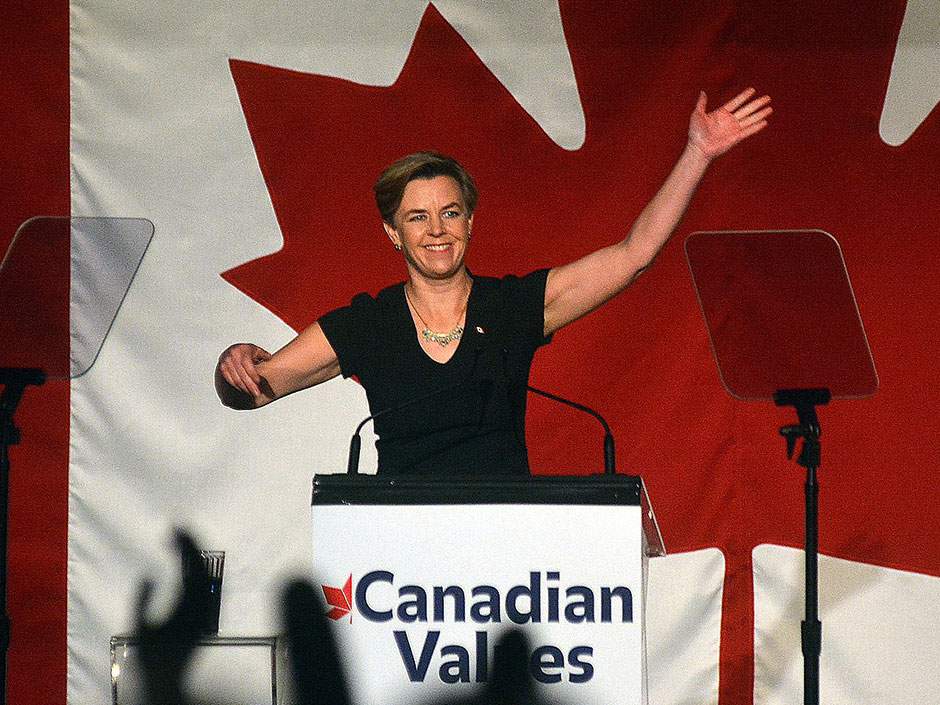 Kellie Leitch: Mace for one, mace for all

In a recent column, my colleague Colby Cosh took Conservative Party leadership candidate Kellie Leitch’s proposal that Canadians be allowed to carry chemical mace and pepper spray for self-defence a step further (or backward depending on your perspective): He would offer the privilege only to women, writing: “Perhaps I’m a little more feminist than she is: I would be comfortable making the carrying of mace and pepper spray a sex-linked legal privilege. Hell, I would consider extending it to very small firearms.”

Now, there is a case to be made for Kellie Leitch’s proposal. If bad people are going to acquire weapons illegally anyway, well then, hell, why shouldn’t the playing field be level, so all citizens have recourse to self-defence? But I can’t think of a single good argument in favour of only half the population being legally armed, and plenty of reasons against it.

The closest I ever came to pepper spray was on a Caribbean Island, where my husband and I spent an afternoon’s excursion as part of a week-long cruise. One of the party inadvertently ordered a drink from a young woman who was not the designated ship drinks purveyor. Immediately a physical fight broke out between the women, as a small crowd of horrified ship passengers and cheering locals gaped, including the boyfriends of the women.

One of the combatants whipped a can of pepper spray out of her bag, eliciting gasps from the passengers and whoops of encouragement from her boyfriend. My chivalrous husband stepped forward without thinking to protect the other woman, but, ever the realist, I pulled him back, hissing, “Are you crazy? This isn’t your fight. She’ll spray you!” (Not to mention the strong possibility that the boyfriends would deck him for interfering in their business.)

Colby Cosh has succumbed as well to the chivalric temptation to treat all women as vulnerable creatures who are at any moment in need of physical protection from predatory men. The fact is, as the two island women demonstrated, the impulse to settle rivalrous differences with violence is not unknown among those of the fair sex, and the potential for abuse of a legal imbalance of physical power is quite high.

What do the statistics in Canada tell us about intimate partner violence (IPV)? Well, a 2014 Stats Can General Social Survey on victimization had 33,127 respondents: 17,955 females and 15,134 males. In response to questions about IPV or Sexual Abuse, 4% reported any occurring within the past 5 years (a drop from 7% in 2009). Four percent of men reported some form of IPV victimization, and 3% of females. Aboriginal rates were 9%, lesbian rates were 11%. Clearly IPV is a bilateral affair.

Of all IPV, about 40% was less serious (pushes, shoves). Of the serious type, respondents reported beating, choking, threats with a weapon, kicking, biting and “non-consensual sexual activity that came as a result of being manipulated, drugged or otherwise coerced”. This latter category was clearly a sop to feminists to increase the rates, as “manipulated” or “otherwise coerced” can mean a partner singing “Baby, it’s Cold Outside” after a few glasses of champagne.

That being said, the “serious assault victimization rates” for the 5-year period were females: 1.6%, males: 2%. Hardly what you would call an epidemic of male-on-female violence. The reality is that a full 50% of IPV is bilateral, with both women and men guilty of provoking each other. Twenty-five percent is perpetrated by males on females without provocation, and another 25% is perpetrated by females on males without provocation.

The most severe forms of violence, the kind that puts people in hospital or kills them, are – yes – far more likely to be male on female. And yet a quarter to a third of spousal homicides, depending on the year, are committed by women. This is not an entirely nugatory stat, especially considering that murder by proxy – boyfriend, brother, etc – is not classified under “spousal homicide.” All other forms of violence, including hitting, pushing, shoving, striking with an object, throwing an object, burning, knifing and pushing down stairs, are just as likely to be perpetrated by women as by men. Innumerable studies and meta-studies keep confirming these numbers, and you can find the sources for them in Prof Don Dutton’s definitive book on the subject, Rethinking Domestic Violence.

The bottom line is that bad men commit extreme violence on women to a far greater degree than women commit extreme violence on men. But overall, non-violent men are at far greater risk of violence from violent men than women. Cosh’s chivalric impulses reflect well on him as a man, but chivalry without knowledge of human nature or social realities is not a good basis for making policies that defy the principle of equality and Charter rights of the individual.