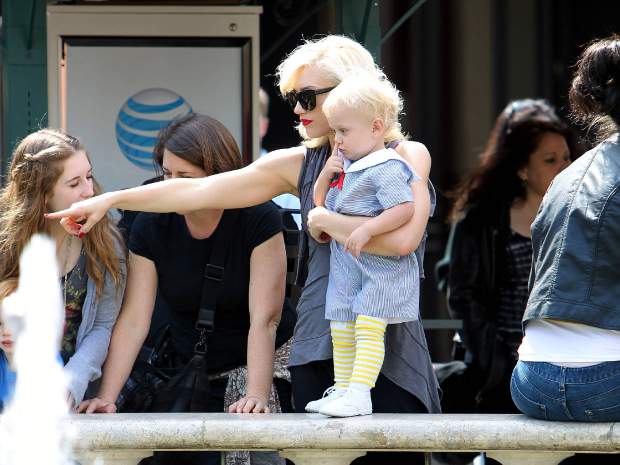 Barbara Kay: Dads are parents, too

Gwen Stefani shops with her family in Los Angeles in 2010.

Poor, poor, poor Gwen Stefani. The Hollywood star split from her rocker husband Gavin Rossdale in 2015. But that’s not why we must pity her. After all, Stefani’s marriage lasted longer than those of most of her peers.

No, the reason Stefani feels she has a claim on our sympathy is that she discovered, to her horror, that when couples split up, their children – in this case Kingston, 10, Zuma, 7, and Apollo, 2 — don’t usually continue to spend 100 per cent of their time with their mothers. Children have these — ah, what do you call them? Oh yes — fathers. And Stefani’s kids are now spending a lot of time with Rossdale. Stefani finds this outcome flummoxing: “It was so insane because not only did my family break up, but then my kids are taken away like half the time, so that was really like, ‘What?! What did I do?’ ”

Stefani concedes her family has “broken up,” yet feels it’s  “insane” that her kids’ father should — as he was before the break-up — enjoy their companionship “half the time.” No allegations of poor parenting have been made against Rossdale, who has been described as “doting,” so objectively it seems pretty “sane” that the couple should continue to share parenting after divorce as they did before.

Stefani describes shared custody as her children being “taken away,” as though they were her possessions. But children are not objects to be “taken away;” they “go” to their father’s home. Her final questions are particularly telling: “What?! What did I do?” Stefani apparently understands shared parenting to be a punishment for an abusive mother, when in fact it’s simply fairness to both parents, and should in 2016 be considered the norm. It does not seem to have occurred to Stefani to wonder how Rossdale would have felt if, though having done nothing wrong either, he only saw his own children when Stefani was on tour.

Mom privilege is not confined to egotistical celebrities. It remains a widespread phenomenon in the West even though, in this era of fevered gender equality, it should be viewed as long past its cultural expiry date. Unfortunately, while the media are all over the slightest manifestation of male privilege, the commentariat is either silent on the justice of shared parenting as a default, or reflexively supportive of mom privilege.

A smarmily mom-centric May article in the U.K.’s Mail Online, entitled “Agony of Being a 50/50 mum,” for example, empathizes with mothers anguishing over the unjustness of a cruel world in which they must share children equally with their ex-husbands. To a critical eye, the piece reads like satire, with trivial woes solemnly affirmed as tragic.

One mom in the article, Veronica, is described as “full of foreboding” on the days her children go to their father, after which she can’t go into the girls’ bedroom because “I know I’ll just dissolve into tears.” Veronica was shocked that their dad had “taken them to the hairdresser” without telling her. Now — gasp – their hair is too short for ponytails. It continues in this hand-wringing vein until, casually dropped in, we read, “Although she trusts her ex-husband implicitly with the care of her girls ….” In other words, he’s not a monster; he’s a good dad.

The reporter’s overt bias emerges in her mawkish tone. She asks us to imagine “the agonizing pain of being privy to your child’s life for only half the time. The milestone missed. The lost cuddles before bedtime … wondering if they are sleeping sweetly or crying out for Mummy.” Please. There are two people missing out on milestones and cuddles, and two people wondering if their kids miss them when they’re not there. But it’s as if one of them does not exist.

Veronica thinks she is being fair when she says, “I know the girls have to see their dad.” That’s just form. In essence, she doesn’t really think her daughters would suffer if they didn’t because, “at the end of the day I’m a mother who has to somehow learn to stop being a mother for half my life. I’m not sure I can ever come to terms with that. I don’t know many mothers who could.”

What about the kids, Veronica and Gwen? Do you know many children who “come to terms” with losing their fathers as so many do in mom-biased family courts? Maybe if the reporter had taken the trouble to interview some — any — fathers, she might have realized that having to stop being a father for half their life is equally “agonizing.” But it never occurred to her to ask. In my experience, it almost never occurs to anyone in the media to ask.