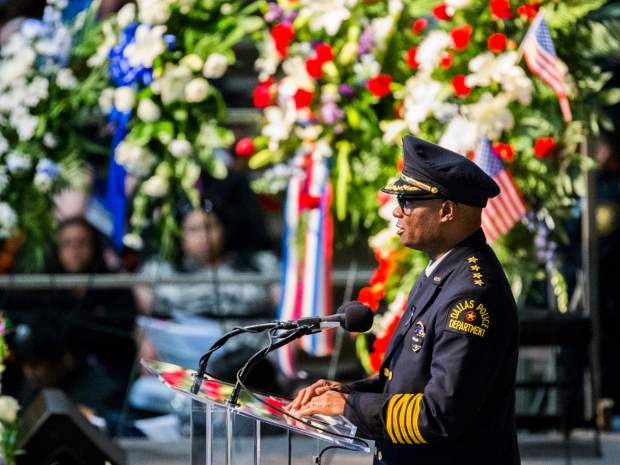 On Sunday, a remarkable exchange took place between outspoken Milwaukee Sheriff David Clarke and CNN’s Don Lemon (both black) after the Baton Rouge, La., incident in which three police officers were killed (one black) and three wounded, by a black man whose social media posts suggested a racial motivation for the attack. It’s worth watching.

Lemon represents the “correct” response to the mayhem (solemn, “our hearts are reeling”), while Clarke is crackling with righteous indignation against Black Lives Matter, the activist group he blames for the violence. “I’ve been watching this for two years. I’ve predicted this,” he said, referring to BLM as a “hateful ideology.” Lemon, visibly agitated, called for a break when Clarke refused to moderate the “vibe.” In a second round, Clarke attacked U.S. President Barack Obama for “lying” in tarring law enforcement as systemically racist, pointing to recent studies that show the opposite. Lemon kept trying to say that the actual data on black crime had nothing to do with BLM, but Clarke wasn’t having that. The segment ended in an impasse.

Clarke’s bullying tone wasn’t pretty. But he laid bare the problem with the ”conversation” we are supposed to be having about racism. BLM and its supporters, including the media, with Lemon an excellent example, talk about disproportionate profiling and aggression in dealing with black males by police, but when their interlocutors talk about the actual data – the disproportion in violent crime by blacks and the highly disproportionate risks to police doing their jobs which helps to explain the profiling and aggressive policing in high-crime areas — the conversation ends.

President Obama is cool where Clarke is hot, but he has not been helpful. He is not only sympathetic to BLM (even though he publicly decries all violence), but he has expressed a tone of fatalism, saying after a meeting with BLM activist Deray McKesson (who has described looting as “righteous,” “I think it is fair to say we will see more tension between police and communities this month, next month, next year, for quite some time.”

Bad message. Obama wants the conversation to be about racism, and racism alone. No wonder many Dallas police sat on their hands while he was speaking at the memorial for the five slain officers there.

In sharp contrast both to Clarke and Obama was (black) Dallas Police Chief David Brown’s speech at a July 11 press conference. While emotional himself, he did not direct his appeal to the emotions, but to facts and solutions. Brown said, “We’re asking cops to do too much in this country. … Schools fail, give it to the cops. Seventy per cent of the African American community is being raised by single women. Let’s give that it to the cops to solve that as well.” That sounds bitter, but he did not linger there. He ended: “Serve your communities. … We’re hiring. Get off that protest line and put an application in. And we’ll put you in your neighbourhood, and we will help you resolve some of the problems you’re protesting about.”

Sheriff Clarke is angry at BLM, and he has reason to be, but anger is not enough. Obama refuses to acknowledge the other side of the story, and that, too, is not enough. Brown was the adult in the room. It helps that Brown knows the pain of inner-city blacks, because – unlike Obama – he has lived it (Brown lost his son, his brother and his police partner to gun violence).

Brown struck all the right notes: defence of his non-racist officers, sorrow at the loss of life and empathy with black pain, much of which has causes other than racism. Most important, he offered a better choice than many blacks have made, the way out of the morass that he himself took. Brown is a role model for his place and time.