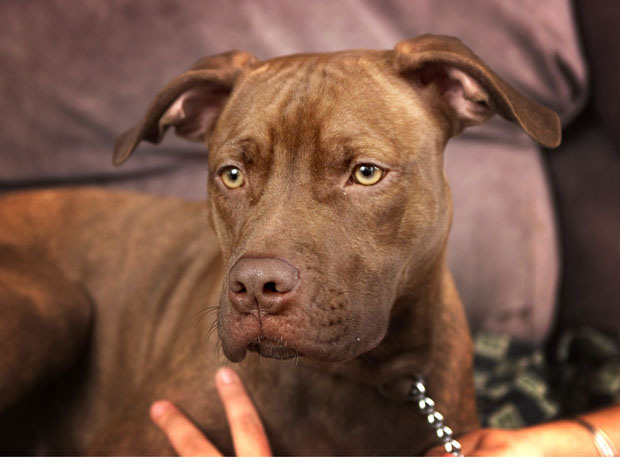 Pitbulls account for 3% of dogs, but almost a third of fatal dog attacks. They are bred for battle.

Pit bulls, of course. Tip: anytime you read a story in which animals end up dead or needing to be euthanized after being attacked by a dog, or children being wounded seriously enough to need hospital attention, you’ll be right most of the time if you guess the attacking dog was a pit bull. Even though pit bulls only represent 3% of the dog population.

In this case, Scott McDowell and his teenage children were walking their Pomeranian, Patrick, and their Great Pyrenees, Max, in an off-leash park — that is, a park meant specifically for dogs to socialize and exercise with other dogs — when they met up with Stephen Jaquish, walking three pit bulls on leashes. One was his own, the other two belonged to a friend. They attacked McDowell’s dogs, and could not be subdued. Patrick had to be euthanized; Max was badly injured. McDowell’s daughter needed stitches for a gash to the hand when she tried to intervene..

It was reported that Jaquish was horrified, but “suggests his dogs were provoked.” He said: “[My] dog would never hurt anybody. She’s being deemed dangerous, but I think she was just protecting like any other dog would do.”

Pit bull owners live in a dream palace, where all dogs are good, and when they are bad, it can be attributed only to bad ownership or the dogs being “provoked” by the animals or people they ravage. Never to genetics, never to the fact that pit bulls were bred for impulsive aggression of exactly this type.

But they can’t admit that. So when their pit bull lunges at a cat and bites its head off, they tell themselves this is the way it is with animals, even though it is rare for any other breed to kill any other animal for no reason. They tell themselves, for a real-life example, when their pit bull attacks and practically scalps a three-year old girl climbing out of a car, that the sudden opening of the car door was the trigger — in other words, the kid had it coming. It’s never the dog’s fault.

Of course real dog fighting men have no such illusions. Dog fighters want pit bulls precisely because they are “game,” because they know that this is the only naturally aggressive breed that can be counted on to fight to the death. They’re not pets, they’re weapons. As the famous, revered, pit bull-loving dog whisperer Cesar Milan put it, when explaining why pit bulls cannot be treated like ordinary dogs:

“This is a different breed … the power that comes behind bull dog, pit bull, presa canario, the fighting breed — They have an extra boost, they can go into a zone, they don’t feel the pain anymore. … So if you are trying to create submission in a fighting breed, it’s not going to happen. They would rather die than surrender. … If you add pain, it only infuriates them … to them pain is that adrenaline rush, they are looking forward to that, they are addicted to it. … That’s why they are such great fighters. … You’re going to have these explosions over and over because there’s no limits in their brain.”

Mr. Jaquish likely doesn’t want to know the statistics on pit bull attacks relative to other breeds. If he took seriously the fact that pit bulls or pit bull crosses were responsible for more than a third of dog bite related fatalities, or that in the first 8 months of 2011, nearly half of those killed by pit bulls were the dog’s owner, he might have to admit that he was putting his own children at special risk. He doesn’t want to go there.

The dogs have been seized by Animal Services and will undergo “behaviour testing” to see if they can go back to their owner. What’s to test, dude? They’re pit bulls. They get “explosions” in their brains. Q.E.D.