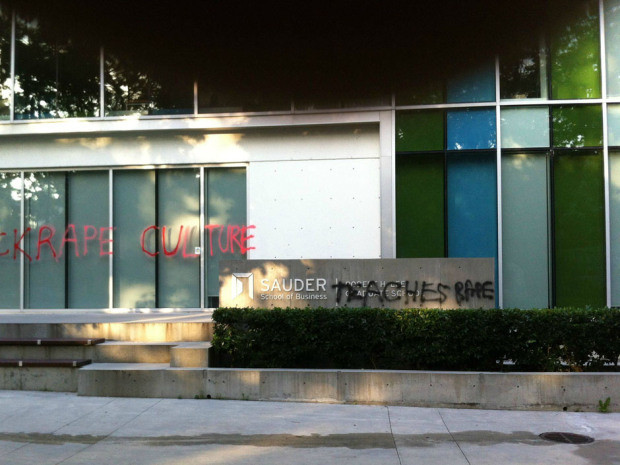 Sixteen months ago, three McGill University Redmen football players were charged with sexual assault of a former Concordia student whom they met in a Montreal bar. The incident was described, in a now familiar pattern, as a spontaneous, late-night sexual episode, after which the alleged victim “woke up quite dazed” hours later, reporting the assault “as her memory returned.”

Are the men guilty? Not yet in law. But these days, condemnation does not wait upon due process. For those who are most puritanical about assailing the “rape culture” that they say exists on our campuses, allegations are rarely false and inebriated sex isn’t really consensual. University administrations listen to rape culturists. Therefore, both McGill and Concordia are beefing up their already substantial sexual-assault resources.

In fact, we do not live in a “rape culture” today. Women on campus do not, as is often asserted, face a one in four chance of being sexually assaulted. (If that were really the case, what responsible parent would send a daughter to university?) As the National Post’s Chris Selley noted in a recent column, self-reportage in Canada’s General Social Survey, considered more statistically reliable than police reports, does not indicate skyrocketing rates of sex assault. “In 1999, 33 of every 1,000 women over the age of 15 reported being the victim of a sexual assault (defined as ‘forced sexual activity, an attempt at forced sexual activity, or unwanted sexual touching, grabbing, kissing or fondling’) in the previous 12 months,” Selley notes. “In 2004, the figure was 35. In 2009, it was 34.”

What has changed in recent years is an increased awareness of the problem of rape (Indeed, it sometimes feels more like an obsession.) Often, as in the McGill case, allegations are accepted as factual by women’s campus advocates before charges are laid or investigated, let alone proven. Even though we’ve seen several egregious campus stories in which alleged rapists were vindicated, but only after their educational careers and reputations were ruined, such cautionary tales fail to give pause to contemporary witch-hunters.

Most famous was the Duke University case. In 2006, a stripper accused three Duke Lacrosse team students of kidnapping and rape. Tropes of race (the stripper was black), class and female victimhood created a powerful witchhunt cocktail, stirred and vigorously shaken by the New York Times and countless other credulous liberal media. Duke’s president and faculty immediately took out their pitchforks and led the baying pack. Some faculty members remained silent, but none publicly protested the rush to judgment.

Many outraged students spurned the police chief’s admonition against a rush to judgment, insisting that if the young woman had reported what happened as rape, it was rape

When prosecutorial abuse was uncovered and the case fell apart, none of the university’s vigilante elites were fired or punished. Only one faculty member apologized. In 2007, all charges were dropped — not for insufficient evidence, but because the men were acknowledged to be completely innocent of the charges. Last month, the false accuser (never punished then) was convicted of second-degree murder for knifing her boyfriend to death. No headlines or public interest there.

Then there was the more recent case at the Athens campus of Ohio University. During Homecoming Week this year, video was taken of two drunk students engaged in public sex acts near the campus. The woman charged the young man with rape the following day. Many outraged students spurned the police chief’s admonition against a rush to judgment, insisting that if the young woman had reported what happened as rape, it was rape.

But the online video suggests the oral sex depicted in the video was entirely consensual. In the video, the woman, who appeared to egg her partner on when a gathering audience inhibited him, was seen smiling, flipping her hair back, showing signs of sexual enjoyment, and even grinning for the camera. Eventually, the two walked off together hand in hand. A grand jury investigation laid no charges because “a reasonable person would think that [the woman] was not intoxicated beyond the ability to consent.”

But who are you going to believe? The myth or your lying eyes? Astonishingly, cognitively-dissonant activists continued to support the “survivor” in social media, letters to the editor and post-it notes at the scene (“This is not your fault,” “We let you down, I am so sorry,” “You are strong and brave”). As at Duke, a group of faculty members — some with a pedagogical stake in theories related to class, race or gender — stood by their original assumption of rape.

These cases illustrate why rational observers are becoming increasingly uncomfortable with the idea that we are suffering a “rape culture” epidemic. The problem of sexual assault is already taken quite seriously, both on and off campus, in our society. We don’t need more sensitivity training courses or women’s centres to address this problem. On the other hand, a campus awareness centre that focused on responsible drinking, prudent sexual behaviour and the virtues of honesty and respect for due process: Now that would be money well spent.