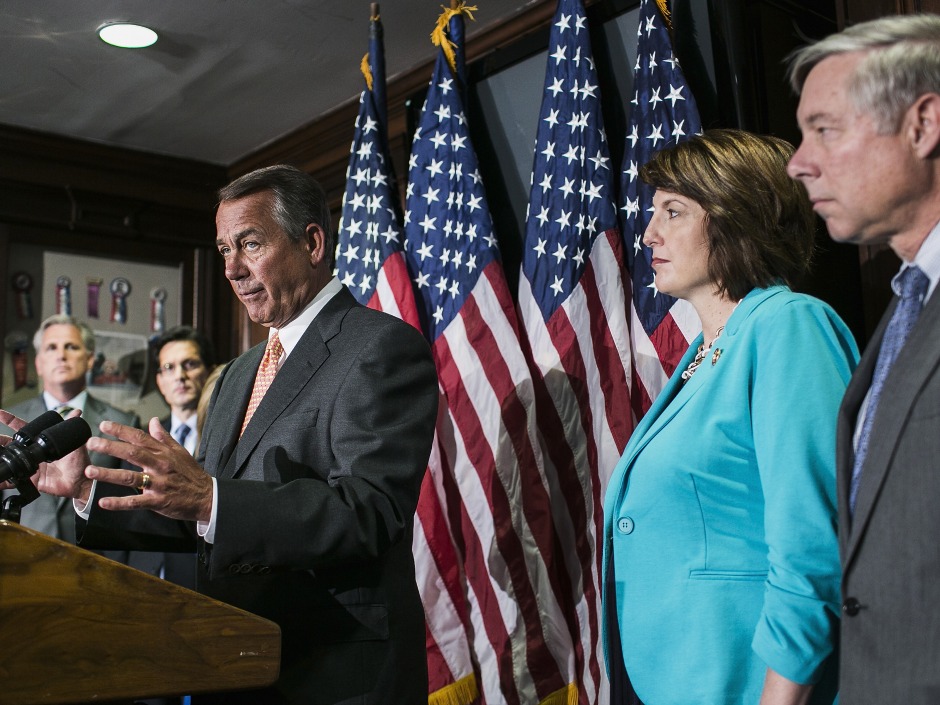 House Speaker John Boehner (R-OH) (C) and House Republican leaders speak to the press after a conference meeting on November 13, 2013 in Washington, DC. The Republican leadership criticized the president's insistence that current health care plans could be kept, citing letters received by their constituents warning about an upcoming plan cancellation.

Two scandals involving political leadership. Two ongoing media circuses. In both stories, the central figure falls from a grace that existed largely in the minds of those who elected him.

One scandal involves a city; the other a nation. But there’s a huge qualitative difference between them. The city scandal will blow over and the city will not change. The national scandal will never blow over, and the nation will never be the same.

Toronto’s Rob Ford is the city scandal. The United States’ Obamacare rollout is the national scandal.

Rob Ford succumbed to his appetites. Gluttony is fodder for comedy (as the many late-night television parodies of Ford attest). We can laugh at Ford because municipal embarrassment isn’t fatal, and because ordinary Torontonians are not suffering hardships from Ford’s failings.

Obama succumbed to his hubris. Overweening pride is not comical. And Obama’s drive to reshape America in his progressive image has fuelled a true political crisis, causing millions of Americans real hardship.

Forgive the Schadenfreude, but I’m on record as an Obama skeptic since Day One. I considered him then what I consider him today: political mutton dressed as lamb, who would prove to be a poor leader. Even so, like many others with low expectations, I am astonished at the scope of the HealthCare.gov calamity.

Nobody is pretending the Obamacare debut is about mere “glitches” any more. Its botched execution has been revealed as a systemically flawed project with no quick fix possible. Left-of-centre pundits are reluctantly critical. But leading right-of-centre pundits are pulling no punches in unleashing pent-up contempt for the owner of this calamity.

Political doyenne Peggy Noonan writes in the Wall Street Journal, “What a fall, and how richly deserved. The administration didn’t care enough to make sure the people of their country were protected. In the middle of a second Age of Anxiety they decided to make Americans more anxious.”

Syndicated columnist Charles Krauthammer says (on Fox News) the failure of Obamacare carries huge symbolic weight, because in it we are witnessing “the epic collapse of a central idea of a new kind of liberalism.” That’s why, he says, Democratic loyalists, “in horror at the train wreck they are witnessing,” are exhibiting signs of “classic denial” (Krauthammer was a psychiatrist before becoming a political pundit.)

It must be quite tempting for Republicans, who all worked strenuously to defeat Obamacare and don’t own even a semi-colon of it, to sit back and enjoy watching the show.

But conservative ideologues Ramesh Ponnuru and Yuval Levin advise against it. In a Nov. 14 Wall Street Journal op-ed, “A conservative alternative to Obamacare,” they encourage Republicans not to be passive, but to offer the public a feasible alternative that would further shame the (remaining) Obamacare stalwarts. Americans, they say, have to understand that universal coverage and market-oriented reforms are not incompatible.

For liberals, this is a tipping point in American history. The Great Healer has not healed

Those with expertise in health care policies are better equipped than I to evaluate their plan, but their main point is well taken: The “absence of a credible alternative has been the GOP’s greatest weakness in the fight against Obamacare.”

In Toronto, some good may yet come of the Rob Ford drama. Policy wonks will study it and perhaps come up with some sensible suggestions for preventing the recurrence of anything like the farce we’ve been witnessing. Meanwhile, for Torontonians, life goes on as it did before Ford and as it will after.

That is not the case for millions of Americans whose lives are in health-care limbo. For liberals, this is a tipping point in American history. The Great Healer has not healed. Government can’t be all things to all people. Without progress, whither progressivism?