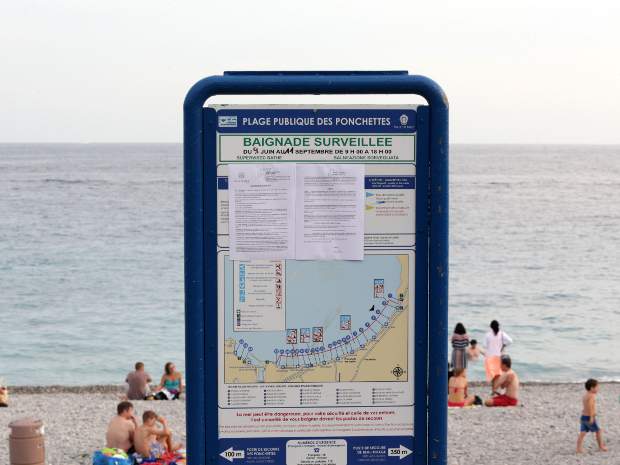 A sign explains a bylaw forbidding women to wear a burkini at the Ponchettes beach, in Nice, France.

In the pantheon of dumb a dumber regulatory decisions, the laurel goes to the attempt this summer by French Riviera towns to criminalize burkinis, the full-cover beachwear favoured by some Muslim women.

Happily the Council of State, France’s highest administrative court, has overturned a lower court’s support for the ban, ruling it “seriously and clearly illegally breached fundamental freedoms.” Unhappily, many will interpret the court’s imprimatur for the burkini as a logical precedent for a repeal of France’s face-cover ban.

Face cover and body cover are completely distinct phenomena. But now that will be a more difficult case to make, thanks to Prime Minister Manuel Valls’ and political revenant Nicolas Sarkozy’s respective dark allusions to the garment as “the affirmation of political Islam in the public space” and “militant and a provocation.”

The burkini may well be intended as a political gesture by some women. But the state has to choose its battles with political Islam, and the burkini, had officials given it a modicum of thought, was the wrong one. It was a truly revolting sight to witness police in a supposedly free country, armed with pepper spray and batons, marching onto a Nice beach and forcing women to strip in front of strangers.

One can understand the anger and frustration Riviera mayors and townspeople felt after the Nice Bastille Day jihadist massacre. But such shaming techniques used on particularly shame-sensitive people does more — much more — to arouse ire in hitherto unalienated Muslims, not to mention appalling both liberals and conservatives in other Western countries, than to serve the French ideal of “vivre ensemble” (living together), or convince Muslims that secularism is superior to religion as a guide to moral behaviour.

More to the point, nobody told Muslim women when they came to France that wearing virtual underwear at the seashore, a relatively recent custom, is a uniquely French or secular touchstone of civic good will.

You can’t win games by erecting goal posts where they never existed before. The fact that France’s top politicians can’t see the enormous “values” gulf between a niqab and a burkini, that is, between a mask and clothing, tells me that they don’t have a clue about ethical boundaries in state-citizen relations.

The burkini ban was a show of panic. Up to now, the French government had not shown any interest in regulating female clothing. As is proper. Demanding that women’s clothing conform to French fashion norms would be like insisting that Muslims and Jews add ham to their cheese sandwiches so their lunch will conform to the croque-monsieur standard of a “French” sandwich.

The fact that most French women choose to wear bikinis is a neutral fact of contemporary life. Bikinis are not a national uniform, nor are they a statement of principle. Immodesty — and that is what bikinis look like to many people besides Muslims — is no more sacred to French culture than are sandwiches made with ham as well as cheese.

Furthermore, the beach is not a public forum in any official sense. On the contrary, it is a strip of common land to which people flock as a break from life in the public forum. Beaches are recreational space where no interaction with strangers is required. So really, if there is one place to “live and let live,” sartorially speaking, it is the beach.

In his new book Beyond Radical Secularism, which has taken France by storm, political philosopher Pierre Manent says France must come to terms with Islam as a permanent force in French life, acknowledging that Islam cannot co-exist in harmony with the radical secularism that France adopted after repudiating the Roman Catholic Church’s authority over public life. He writes that in spite of escalating strictures, “We are witnessing the extension and the consolidation of the domain of Muslim practices rather than its shrinking or relaxation.”

Manent says the only productive response to this extension of practices will be to act “defensively.” He argues that Muslims are fundamentally distinct from previous immigrants and will not willingly adopt secularism as a ruling principle, so France must allow Muslims concessions secularism does not, for example, allow the Jews: communal rather than individual rights. Burkinis, by inference, must be accepted as newly “French.”

But Manent does draw a red line, arguing that on defensive grounds, France should continue to forbid three Islamic practices: face cover, polygamy and the foreign funding of mosques. Amen to all three.

Appeasement or realism? Perhaps both. Do you have a better solution, preferably one that does not end in civil war? Meanwhile, let all women, with their faces uncovered, wear what they want at the beach.