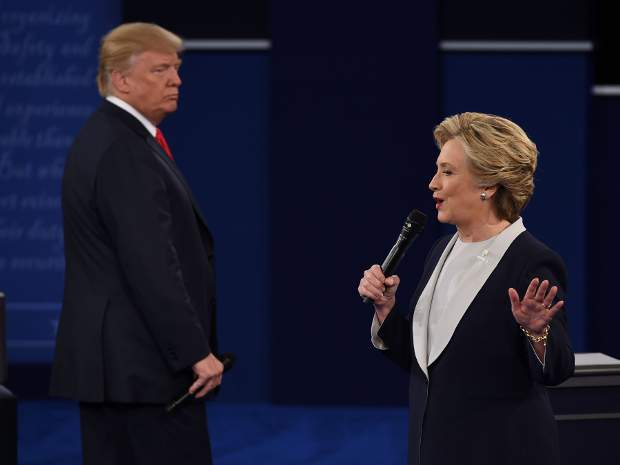 Some thoughts on Sunday’s second Trump-Hillary debate as they came to me.

I don’t like the town-hall format – a local, intimate concept — for what is neither local nor intimate. It makes even the best-prepared candidates look artificial, self-conscious and awkward. The candidates, as is generally the case, made small pretence of respecting the format, using the questions as a diving board: a smile and a bounce on the topic, then into the air for their rehearsed acrobatics.

Besides which, serious people debating a nation’s future belong behind a podium. They should not distract us or their opponent by prowling the stage. Donald Trump did more than prowl; he was stalking Hillary Clinton. I thought for a few seconds there, when he got very still and stared, cobra-like, at the back of her head, that he might actually pounce.

I’m also skeptical about the “undecided” status of the people on stage. Does anyone really believe the Muslim woman who questioned Trump on his immigration views hadn’t made up her mind? (Let’s see, he’s suspicious of Muslims and doesn’t want more of them here; she loves Muslims and favours open immigration. Wow, I’m stumped.)

But now on to important stuff. Clinton looked terrific. The designer, hair stylist and makeup artist who put her together made her look 10 years younger and 10 pounds lighter than she normally does. That suit was all business, but classy and feminine, too. An inch more white bib and it would have screamed “Penguin!” but didn’t. And a big step up from her all-red Chairman Mao look in the previous debate. People will roll their eyes at this, but this matters. This is high-stakes TV and appearance matters. Her goal was to look like someone who had never had a concussion or a tendency to faint. Mission accomplished.

Looks alone weren’t going to cut it for Hillary, but she got very lucky when some especially sordid revelations of already-known Trumpian misogyny came to light from a 2005 “locker-room” style exchange, with Trump boasting of his aggressive sexual style with women. The tape proved to be a tipping point for many Republican supporters. No brownie points for them for abandoning ship now, though. They were well aware of who and what Trump is. The tape was only additional and coarser proof.

Trump knew the only possible working tactic was to go on the offence, so he brought along four women who claimed they’ve been victimized by the Clintons (three of them by Bill). But that was overkill, and made Hillary look sympathetic and dignified. He should have underplayed it, answering kind of playfully, “I did a bad thing, and I have apologized for it. Hey, Hillary, you know what? This would be a good time for you to apologize as well for your misogynistic complicity in shaming and silencing the victims of your husband’s predatory sexual habits.”

Really, considering all the other shockers in Trump’s campaign – disparaging a war hero, mocking the disabled, racializing a judge, lies too numerous to mention — it is kind of curious that this tape should turn out to be Trump’s undoing, if that is what “Pussygate” is.

Personally I found the tape only slightly more explicit than what we already knew. I don’t excuse Trump, but he is a symptom of our sexually braggadocious culture, not an outlier to it. Usually it’s music stars like Jay Z doing the bragging, though (“You know I thug em, f–k em, love em, leave em/Cause I don’t f–kin need em”).

In the world progressives have made — the mutually exploitative hook-up world — sexually predatory men and aggressively promiscuous women alike are the norm. Hypocrisy abounds, though, when the power stakes rise. Women must be ladies and men must be gentlemen. Pant suits and sleeveless dresses aside, our political stage is more Edwardian than postmodern. Trump never conformed to that model, and up to now never paid a price for it.

Trump is an alley cat, but no worse than the presidential bounders (mostly Democrats) who came and conquered before him. With time, they were forgiven: all the Kennedy boys, LBJ, and Mr. and Mrs. Clinton.

My takeaway from Pussygate and the second debate is this: Hillary is dirty, but cleans up pretty, and can stay pretty for 90 minutes and beyond. Trump is dirty, but can’t clean up pretty at all, not even for the sake of the glittering prize. The world stage demands pretty. Hillary is corrupt and a hypocrite, but the lesser of the two evils, and that’s who Americans have to grit their teeth and vote for.