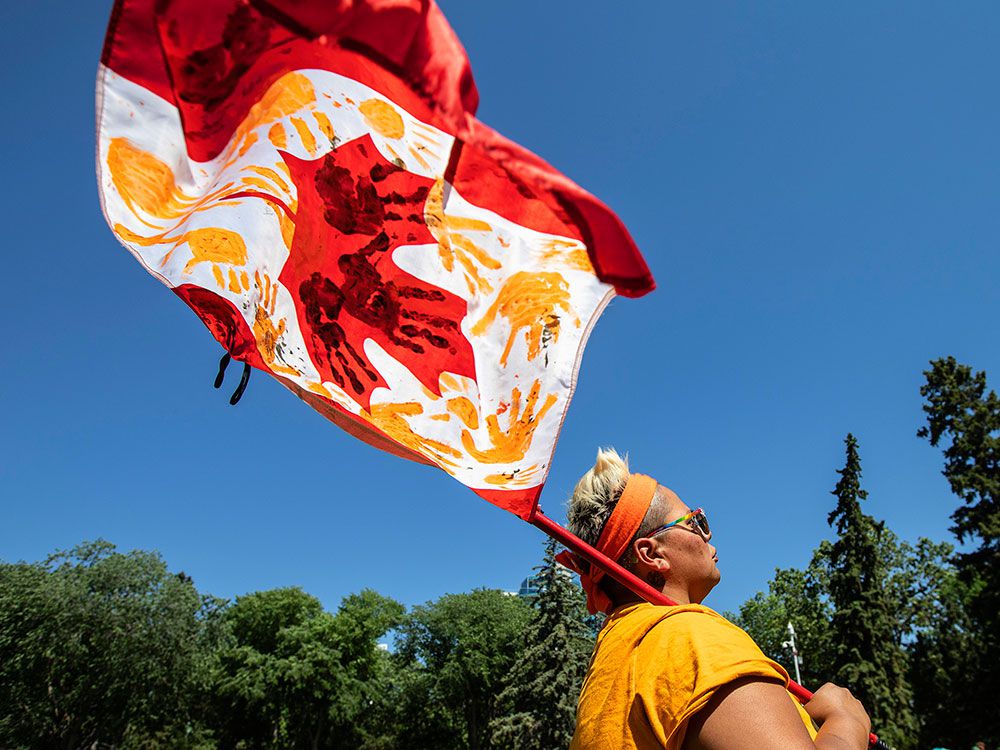 A woman takes part in a march held in memory of the children who attended Indigenous residential schools, on Canada Day in Edmonton, July 1, 2021. Photo by Jason Franson/The Canadian Press

To mark this past Canada Day, the Canadian Historical Association, which represents the interests of 650 professional historians, issued a statement whose purpose was to justify the application of the word “genocide” to the history of Indigenous oppression in this country, with special emphasis on the Indian Residential School system.

The CHA council’s statement cites the 1948 Convention on the Prevention and Punishment of the Crime of Genocide, ratified by 152 states including Canada, which defines genocide as any or all of five acts directed at a particular group: killing members; causing serious bodily or mental harm; deliberately inflicting conditions calculated to bring about the group’s destruction in whole or in part; imposing measures intended to prevent births; or forcibly transferring the group’s children to another group. The authors say Canada’s “genocidal policies” and “genocidal systems” continue to this day and may therefore be considered an ongoing genocide (a view endorsed by Prime Minister Justin Trudeau).

Barbara Kay: Historical association's genocide statement 'brazenly unscholarly' Back to video The council’s assertion that its viewpoint had the “broad consensus” of its membership triggered pushback. Christopher Dummitt, Associate Professor in Trent University’s School for the Study of Canada, vigorously disagreed with the content of the Canada Day statement, and he knew other Canadian historians did, too. Under his leadership, a number of his colleagues joined in writing an open letter to “express our grave disappointment” with the CHA statement. They characterized it as a “coercive tactic,” accusing CHA directors of not only “fundamentally [breaking] the norms and expectations of professional scholarship,” but, by insisting on a sole interpretation, “insulting and dismissing those who have arrived at a different assessment.”

The letter demands the CHA retract its statement and “honour its best traditions” by “upholding the values of viewpoint diversity and open scholarly debate.” The open letter will be published shortly in the Literary Review of Canada and in Le Journal de Montréal. Dummitt has expanded on its themes in a Quillette article, published Aug 11. In an email to me, Dummitt expressed concern at “how much intellectual bullying is taking place by activists and activist historians right now.” The statement, he said, is “a brazenly unscholarly tactic aimed at silencing people and presenting anyone who questions the activists’ rhetoric as racist or backward.”

The letter is signed by 50 historians, a significant number, especially considering the many others who let it be known privately they were abstaining because of tenure concerns. Signatories include the multiple-award winning Margaret Macmillan (University of Oxford), J.L. Granatstein (York University) Patrice Dutil (Ryerson University) and Robert Bothwell (University of Toronto, retired). Notable amongst these distinguished scholars is the name of Jim Miller (Professor Emeritus of History, University of Saskatchewan), a former president of the CHA, whose formidable credentials in this scholarly domain demand — minimally — respect. His most recent publication (2017) is Residential Schools and Reconciliation: Canada Confronts Its History.

In an exchange conducted by telephone and email, Miller explained his objections to the use of the term genocide. Foremost, he says, is the CHA statement’s failure to back up its claim of the Canadian government’s “genocidal intent.” The United Nations’ Convention on Genocide specifies that the “intent [to destroy] and action must both be present for destructive state actions to be considered genocide,” he observed. The CHA statement alludes to “ample evidence” for genocide, but it “does not cite a single piece of evidence” for intent. What “rankles” Miller most is “the sloppiness of their so-called analysis.”

A class at the Marieval Indian Residential School in Saskatchewan is seen in an undated photo. Photo by Societe historique de Saint-Boniface,  Reference No. SHSB 1441 Miller himself holds the unequivocal opinion that while government policies were terribly destructive to Indigenous peoples, those actions were not undertaken with the intent to destroy any Indigenous group. The government’s objective was always assimilation, not extermination. Why, he asks, would the Macdonald government have promoted smallpox inoculation amongst First Nations in the West in 1883 if destruction was their goal? Why did Macdonald press to give First Nations the vote in federal elections in the Franchise Act of 1885? Residential schools, limitations on mobility, reshaping of Indigenous economies and systems of governance, as well as suppression of language and spiritual practices: all were conceived “to control their actions, not to destroy them.” If the government had wanted to destroy First Nations, Prof. Miller concludes, “it would not have devoted so much effort to turn them into Euro-Canadians.”

What Miller has described — forced assimilation — is a sad commonplace of history, and a practice that is not confined to white imperialists. All races have been guilty of it, including warring Indigenous tribes.

In assessing the Canadian experience, wider context is instructive. For a European-Indigenous model of demonstrable genocide, we have the Iberian conquest of the Americas. According to Argentinian scholar José Faur, Spain committed “the greatest genocide in [recorded] human history.” By 1600, the original population of Mexico was reduced from 25 million to one million. Moreover, the Spaniards’ stomach-turning methods of torture and execution left no room for doubt about their “intent” to destroy.

More On This Topic Christopher Dummitt: The Canadian Historical Association’s fake 'consensus' on Canadian genocide 'This school is a jail house': Documents reveal the horrors of Indian Residential Schools If the CHA has its way in inflating the word genocide to include Canada’s Indigenous residential schools alongside this horrific historical record, then it will have robbed the word genocide of all precision, and therefore of any trustworthy universal meaning. Evidence-based categorization is the foundation for true scholarship. Rejection of evidence that casts doubt on a politically expedient theory is the hallmark of ideology.

The council states that in the past historians “have often been reticent to acknowledge [Canada’s] history as genocide.” That failure, it says, “has served to perpetuate the violence.” Without using the actual word, the CHA is accusing a large swath of its members of genocide denial, nowadays a charged, often weaponized word. There is a reason that the Holocaust is the gold standard for the word genocide. Both intentions and actions were too lavishly documented for dissent. Which is why Holocaust denial is understood by all rational people to be a sign of cognitive cretinism or pathological racism. Does the CHA council understand how far below the belt of its own members its statement strikes?