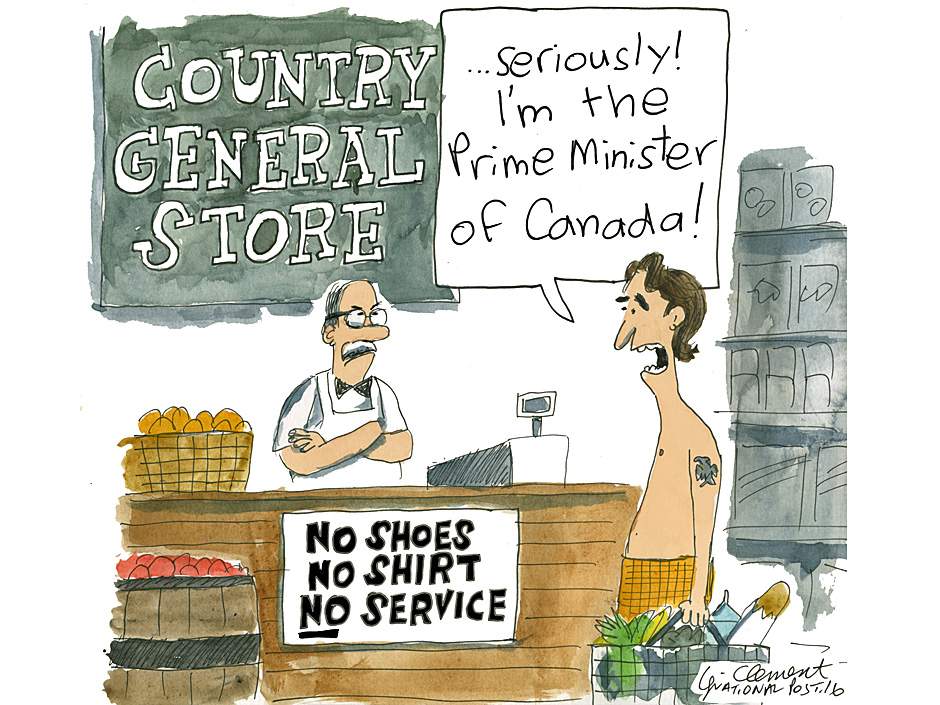 Barbara Kay: How dignity lost its shirt in high office

An Ontario family, out camping in Gatineau Park near Ottawa last weekend, was startled to cross paths with the Prime Minister and his family enjoying a cave-exploration excursion. As is his wont, Justin Trudeau greeted the Godby family members with affability and enthusiasm. And then he posed for the now-obligatory selfie with one of the Godby children.

It apparently did not occur to Trudeau to ask his excited young fan to wait a moment while he put on a shirt. It probably seemed quite natural to him that a national leader nowadays should appear bare-chested in a photo destined to be plastered over social media here and abroad.

Doubtless even raising the question of whether Trudeau committed an impropriety will puzzle many younger Canadians who will find this “humanizing” photo quite normal. But to an older generation, struggling with the ever-diminishing sense of decorum that used to be taken for granted in political leaders, the photo held symbolic significance as one more nail in the coffin of dignity in high political office.

It’s true that Trudeau has posed before while bare-chested. But when he fought Senator Patrick Brazeau as a publicity stunt, he wasn’t yet the prime minister. That’s a difference with a distinction. Prince Harry has been photographed shirtless. But if he were to become (through tragic happenstance) the king, you would not see a shirtless Harry in a photo while interfacing with a member of the public.

Once the Gatineau photo was posted, immediate comparisons were made to Vladimir Putin, whose shirtless poses on horseback, hunting or fly fishing have elicited so much mirth around the world.  The resemblance is superficial, though. Although both leaders are understandably proud of their physiques, the photographs of bare-chested Putin are all carefully staged with nobody else in the frame. They are not meant to humanize him, they as transparent visual cues to Putin’s power and control over his environment. Trudeau’s bare-chested photos are flirtatious bids for public admiration and affection; Putin’s are threatening reminders that age has not diminished his ability and willingness to subdue political opposition.

The dumbing-down of dignity in high office in the U.S. began with the formal and diffident Richard Nixon’s September 1968 appearance on the TV comedy series, Laugh-In. His awkward declamation of the program’s signature “Sock it to me!,” an attempt to soften his “angry” image, was a declaration of surrender to youth culture. But that was a desperation campaign ploy; he would not have done it as the president.

Presidents today find middlebrow media a comfortable fit. Bill Clinton played (a very decent) jazz saxophone on late-night host Arsenio Hall’s show in 1992 to cement his image as the “first black president.” Republican types like George W. Bush were more inclined to interviews with sober-minded Charlie Rose on NPR. But Obama was very comfortable chatting it up with – and even, somewhat stiffly, taking satirical jabs – from comedy-news host Stephen Colbert (but not the less sympathetic Bill Maher).

Hillary Clinton’s history and the word “dignity” are uneasy cohabitors, but she dutifully makes the rounds of the talk shows and laughs her phony laugh where she must.  As for Donald Trump, he represents the utter collapse of the concept of dignity of office. He wouldn’t know what the word “dignity” meant if it jumped up and ran its fingers through his Cheetos-coloured hair. Trump won’t take off his shirt because he is no Trudeau or Putin physically, but mentally he is a naked selfie video none of us can turn away from, or turn off.

Trudeau is not to be compared to Trump for offences against decorum, but his shirtlessness is a symptom of a larger phenomenon in western culture. His generation has lost the capacity, or at least the willingness, to distinguish between the private and the public.  They are also obsessed by the ideal of “equality” and disowning any vestiges of tall-poppy syndrome lingering in their veins. So whenever possible, even those who achieve high office wear jeans and t-shirts as a sign of how “equal” they are to everyone else, and taking selfies with all and sundry is their way of proving it.

But equality of value in persons high and low is not the same as equality of function in persons high and low. Our leaders should hold themselves to a higher standard of decorum for the same reason judges and lawyers don special robes for courtroom duty. It is their way of paying deference to the law as an ideal, and as an acknowledgement of their special obligation to see justice done. Let’s just say that no justice of the Supreme Court, out hiking in the forest on his own time, would ever dream of taking a selfie shirtless. Yet, anyway.

You know who else who would never have taken a shirtless selfie in the woods, even though he spent plenty of time in them? Pierre Elliot Trudeau. He pirhouetted behind the Queen’s back and he slid down bannisters, because he liked to blow some of the cobwebs away from musty corners of diplomatic life. But Trudeau père never lost sight of the limits to playfulness. Trudeau fils should rethink his instinct to blur the lines between private life and his national role. Even though it’s 2016.