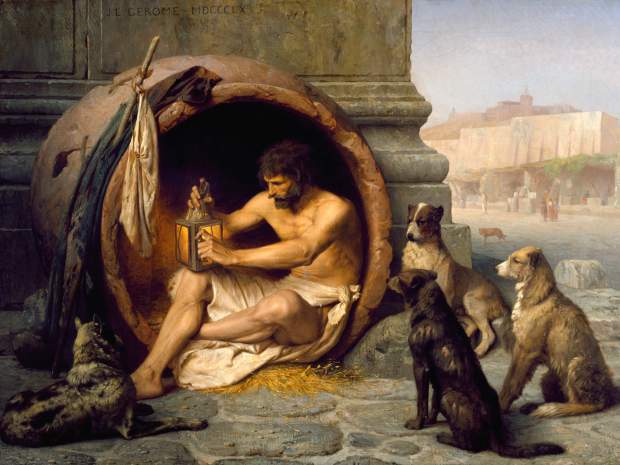 Barbara Kay: How progressives perverted the study of history

An artist's depiction of the Greek philosopher Diogenes.

Pulitzer-prize winning historian Barbara Tuchman had neither a PhD nor an academic title. ”It’s what saved me,” she said. ”If I had taken a doctoral degree, it would have stifled any writing capacity.”

Tuchman’s illustrious career reminds us that history, although a discipline, does not require professional accreditation to explore. Beyond writing, research and organizational competence, one requires only a passion for knowledge about human nature and a sharp eye for the patterns to which it has given rise throughout the ages.

Thomas Carlyle considered history writing the first example of man’s creative thought: “there is no tribe so rude that it has not attempted history.” The ancient Greeks thought so highly of history that they accorded it its own muse — Clio, one of Memory’s seven daughters.

Sociology cannot boast so old or distinguished a lineage. Although philosophers have studied man in society for thousands of years, it was only in the 19th century that it emerged as a “science” (in quotation marks because almost from the beginning, it shed the objectivity and disinterestedness that is supposed to govern scientific inquiry).

From the 1960s forward, when the New Left started calling themselves “progressives,” sociology was subsumed into the Marxist agenda as an activist tool for social engineering. As one textbook defines sociology’s mission today, it is “to alleviate human suffering and make society a better place to live.”

This is political activism, not truth-seeking. Like many humanities’ disciplines — gender studies springs immediately to mind — sociology quickly became what high-ranking sociologist Stanislav Andreski called “a sloppy pseudo-science.” And pseudo-sciences are to pure intellectual inquiry as astrology is to astronomy.

The displacement of traditional history by sociological progressivism is the subject of a new book by Saskatchewan historian Curtis R. McManus, titled Clio’s Bastards, or The wrecking of history and the perversion of our historical consciousness.

From the confrontational subtitle, it is clear that McManus didn’t write the book to woo progressives, but to boost the spirits of deflated conservatives who realize they have lost the “war” over who and what ought to be the subjects of historical inquiry. The book describes the process in which sociological progressives (he calls them SocProgs, a wink to George Orwell) “thoroughly displaced” traditional history in Canadian history departments, virtually without protest (apart from historians Jack L. Granatstein and Michael Bliss).

Traditional historians explored the past “with the aim of explaining the nation to its citizens.” The SocProg goal is twofold: to “give a voice” to those whom traditional historians “excluded” and to expose the “systemic” attitudes and beliefs that cause, enable and perpetrate the oppression of minorities.

Where history dissertations used to discuss politics, war, diplomacy and the maturation of the nation, now they deal with “history from below” — the marginalized and the voiceless, in the process excoriating the “elites” who oppress them — i.e., “writing history on behalf of Justice itself.” Several decades on, the SocProg approach has produced a grievance identity culture, coupled with two generations’ near-complete ignorance of our history.

All this in the name of “progress.” McManus rejects out of hand the whole idea of “the right side of history” progressives speak about so confidently. Medical science progresses. Literacy progresses. For the soul’s progress, we have philosophy and religion. But, he says, civilizations — the business of historians — all go through stages of birth, vigour, maturity and decay. They don’t, in other words, always progress.

The best thing about Clio’s Bastards is McManus’s linking of the SocProgs with their anarchic forebears in ancient Greece, the only sustained adventure in democracy in history apart from modern Western society’s. (Their democracy lasted 250 years before its decline and fall. Ours has lasted about that long. Are we declining and falling?)

McManus shows us that Marx’s reductive materialism and advocacy for the wrecking of Western civilization are not original. SocProgs are merely recycled Sophists and Cynics of Athens 2,500 years ago. Both — but especially the Cynics — rejected the notion of timeless and universal truths, morality, conventions and customs, and repudiated all constraints on personal liberty.

The Sophists delighted in moral relativism and taught students to “talk all traditional values out of existence.” The Cynics sought an absolute freedom — “negative liberty.” They denounced private property, mocked the idea of civic duty and called for untrammeled libertinism. They were also the first internationalists. Diogenes, the most famous Cynic, said, “I am not a citizen of any of your cities.”

Like the hippies, sexual transgression was the heart and soul of the Cynics’ solipsistic concept of liberty. Diogenes counselled the beauty and importance of “promiscuous sexual intercourse” in a Utopian world where “everyone misbehaves with everyone else,” and where incest is not proscribed. To make his point about unlimited personal liberty, Diogenes even masturbated in public.

Everything new is old again. Clio’s Bastards is a lively and informative book. I recommend it.