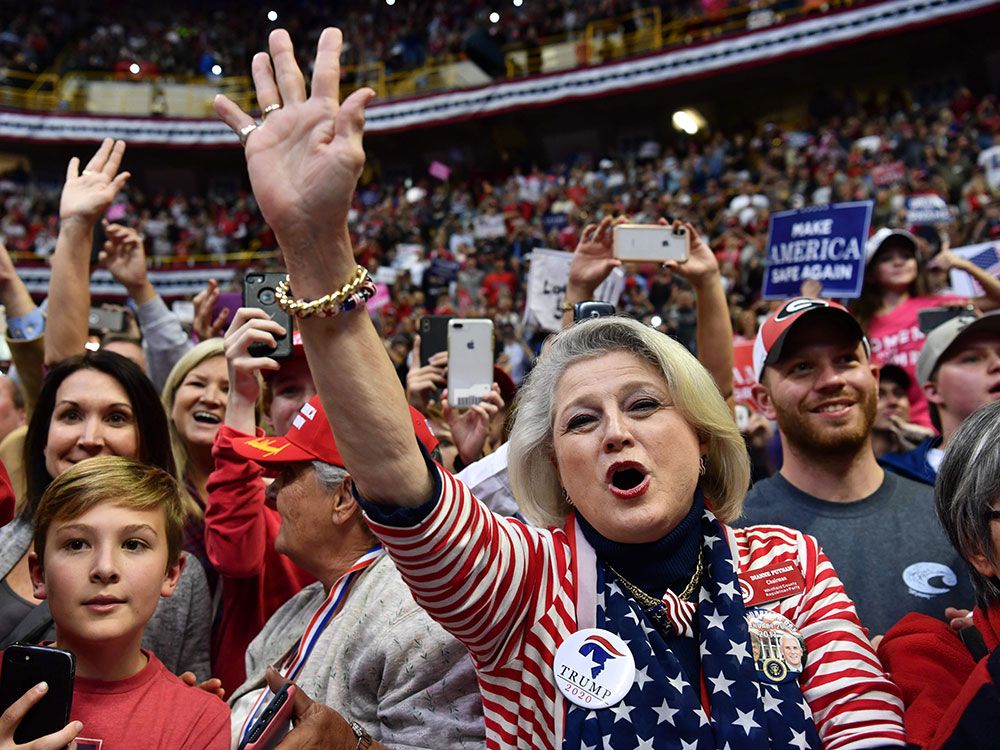 Barbara Kay: In defence of the nation-state, and democracy

Although not on the ballot, America’s midterm elections were all about Trump. Not his policies or unique personality, but the trend throughout the West — loosely defined as populism — that he symbolizes. This was the topic of last Friday’s Munk Debate between David Frum and Stephen Bannon: “Resolved that the future of Western politics is populist, not liberal.”

As expected, the uncontroversial, anti-Trump Frum — a chattering-class favourite with a hometown advantage — handily won the numerical vote. But he failed to land a knockout intellectual punch. Bannon, relaxed and emollient in tone, proved an effective debater.

Bannon’s claim is that the argument isn’t whether populism is the future — he considers that question settled — only whether a nationalist or a socialist form of it will triumph (“the rest is just happy talk”). That brought to mind Stephen Harper’s parallel understanding, in his new book, Right Here, Right Now, of broad tribal divisions in the Western world today as the “somewheres” (nationalists) and the “anywheres” (internationalists), neologisms already in circulation, but my first encounter with them.

The “anywheres” are left-leaning elites, representing about a quarter of the population, but disproportionately influential in their dominance of cultural institutions: urbanites steeped in the ideals of globalism, multiculturalism and the free movement of people. They travel a lot.

The “somewheres” are rooted in geographical identity — those the philosopher Edmund Burke described in this often-cited text: “To be attached to the subdivision, to love the little platoons we belong to in society, is the first principle (the germ as it were) of public affections. It is the first link in the series by which we proceed toward a love to our country and to mankind.”

Justin Trudeau, an unabashed anywhere, calls himself a “post-nationalist.” Donald Trump is his dialectical opposite. His “America First” mantra offends progressives, but got him elected. The European Union is of course the very model of the anywheres spirit.

Bannon asked a legitimate question: “Why is the nation-state so scorned and demonized (by the post-nationalists)?”

Are all nationalisms the same? Are there good nationalisms and bad nationalisms? These are questions Yoram Hazony asks and answers in his new book, The Virtue of Nationalism, in which he sets the particularism of good nationalism against what he calls the new “liberal imperialism” of the universalists.

According to Hazony, nationalists believe that their own religion, language and bloodlines have forged them into an extended family, a greater platoon, which is a nation. The bright line between nationalists and liberal imperialists, Hazony says, is that nationalists seek self-determination, while imperialists seek conquest.

Nationalists do not believe that a single universal way of life is right for everyone. A democratic nation-state can live next door to a monarchy or autocracy, without wishing to impose its way of governance. Imperialists, Hazony maintains, feel compelled to extend their vision outward, whether it is the Pax Romana, the Caliphate, or the European Union, which has benign ideals, but imposes its will in far from democratic ways. (Are not universities today a microcosm of left-wing imperialism?)

Hazony proposes Israel as the avatar of a successful nation-state. For all its faults, he says, Israel takes “a principled standpoint that regards the world as governed best when nations are able to chart their own independent course, cultivating their own traditions and pursuing their own interests without interference.” This is the only way for peoples to truly live and let live in ways that optimize the well-being of all distinctive groups, while preserving and safeguarding liberal democracy.

One section of Hazony’s book is called “Anti-Nationalism and Hate.” Europe and American campuses are ablaze with anti-Zionism. It used to be understood that Jews could never be safe without their own nation-state. But Europeans decided nationalism had caused the bloodbaths on their soil, and the only safeguard against repetition of those enormities was assimilation of individual nation-states into a superstate.

The refusal of Israelis to think and behave like liberal imperialists infuriates them, Hazony says. (It would also explain why Trump admires Israel, and why 75 per cent of Israelis admire Trump.) Israel’s success, Hazony says, is a rebuke to the European Union and to its failure to live up to its own utopian goals.

Israel’s success, Hazony says, is a rebuke to the European Union and to its failure to live up to its own utopian goals

Somewheres and anywheres must come to some sort of reconciliation, because neither side will be convinced by arguments, as Brexit demonstrated. Leavers voted with their hearts and guts. As the U.K.’s Daniel Johnson, editor of Standpoint magazine, put it in a lecture, “Patriotism, Cosmopolitanism and Democracy,” given in Portugal last June, the “only hope of reconciliation between the anywhere(s) and the somewhere(s), the rootless cosmopolitans and the deplorable patriots, is for both sides to tolerate each other. And that means accepting the democratic verdict … Democracy alone legitimizes the nation state; democracy legitimizes the nation state alone.”