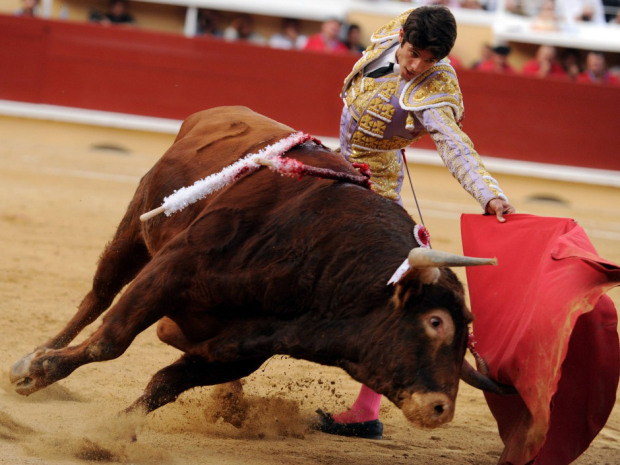 Barbara Kay: In restive Catalonia, bullfighting is on the ballot

Catalonians have properly rejected this sadistic ‘sport’ — but in the rest of Spain, it’s being defended as part of the nation’s ‘cultural heritage’.

On Scotland’s referendum day last week, observers from Spain’s northeastern secessionist region of Catalonia, Italy’s German-speaking Sud-Tirol (seeking reunion with Austria), France’s Corsica and Belgium’s Flamand all flocked to Scotland to bear witness to history. The disappointing result hardly dented the resolve of at least one of these groups.

“The Catalans see [Scotland] as a victory regardless of the result, and I think we are heading for a very nasty crisis,” said Charles Grant, head of the Centre for European reform.” A million (of 7.5-million) Catalans reportedly marched in protest last week against Madrid’s ban on Catalonia’s projected November “Consulta,” a pre-secession vote, which the Spanish government has threatened “all available means” to block. On the day following the Scottish referendum, the Catalan legislature defiantly passed a bill to make the November 9 regional election a referendum on independence.

If it passes, a bull named Elegido should have a statue erected in his honour in Barcelona.

The Toro de la Vega is a “fiesta,” held every September since medieval times in the Spanish town of Tordesillas. The main event sees the release of a bull that is chased through the streets and into the countryside, where lancers keep wounding the bull until it dies (if it survives the brutal assault, it is “pardoned”). Last week, about 40,000 people participated in the event, with 45 men engaged in the actual lancing. It was also attended by thousands of protesters, inflamed by the sight of Elegido’s prolonged, agonized death at the hands of his ritual tormenters.

Blood sport involving animals is no longer tolerated in most of the West. Bullfighting aficionados in Spain are the last holdouts, and even there they are a dwindling lot. In 2007, there were 2,000 arena bullfights; in 2012, only 1,014 — a 40% drop. Soaring ticket prices don’t help. Only subsidization keeps the “sport” alive. An internal EU report estimates that Spanish bullfighting benefits from $177-million per year under the Common Agricultural Policy. Last July, the Dutch Parliament unanimously adopted a resolution asking for the subsidies to be cancelled, but it failed to pass.

So bullfighting, it seems, could be the decisive factor in pushing the separation option to its tipping point. Last November, following the 2013 Toro de la Vega, Spain’s bullfight-friendly ruling Popular Party passed a parliamentary bill giving bullfighting “cultural heritage” status throughout Spain (also announcing it would seek UNESCO World Heritage status). Before the Popular Party was elected in 2011, Spanish state networks had not broadcast bullfights in prime time since Toro de la Vega participants assaulted a female reporter during a live broadcast in 2007. The Popular Party reinstated the broadcasts. Furthermore, the new federal bill requires all regions of Spain to “develop measures to promote and protect” bullfighting and activities associated with bullfighting, like breeding and bullfight-themed art.

Some bullfighting supporters argued it is an art form; others that it was a freedom issue. Happily, animal-rights activists won the day

It was foreseeable that separatist pulses would quicken in reaction to the elevation of bullfighting to “cultural heritage” status. After all, in 2010 bullfighting was banned in Barcelona (where bullfighting has been in decline for decades, with just one major ring and about 15 fights per year), and in the rest of Catalonia. The last matador in Catalan history plunged his sword into the last fighting bull in 2012. Predictably, cultural conservatives mourned its passing. Catalan poet Pere Gimferrer complained: “It is the worst attack on culture since our transition to democracy.” Some bullfighting supporters argued it is an art form; others that it was a freedom issue. Happily, animal-rights activists won the day.

It’s unfortunate when animal and identity rights become entangled. Foxhunting and dogfighting debates in Britain and the United States respectively were roiled by tropes of “class” and “race.” In Spain it’s “culture.” But, as Dr Salvador Giner, head of the Catalan Studies Institute in Barcelona, put it: “[Bullfighting] is a barbarous tradition,” and “The issue is a moral one, not a nationalist one. Are we a modern nation, or are we going back to the middle ages?”

Ernest Hemingway, the great romancer of macho showdowns with animals, performance theatre in which bulls suffer to validate masculine honour, is long gone. National pride and animal torture can no longer co-exist in harmony. Catalans get that. The government of Spain must ask itself, what price “cultural heritage”?