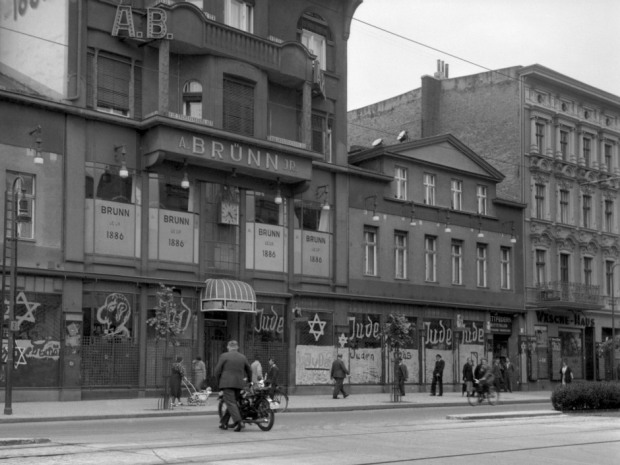 A picture dated on November 10, 1938 in Berlin, showing the A Bruenn JR shop, a Jewish-run store after it had been vandalized by Nazis.

During the Second World War, civilization as we knew it perished in the fires of the Holocaust. The fires were stoked by a hatred whose ferocity had no precedent in human history. Shocked to the core, we thought we would never see its like again. We are seeing it again, but we are shy to call it by its name, lest we be forced to admit that there is no atrocity so egregious it cannot serve as inspiration elsewhere.

The night of Nov. 9-10 will mark the 77th anniversary of Kristallnacht, the 1938  “night of broken glass,” when a general pogrom against Jews was incited by the Nazi government. Like the current “knife Intifada” in Jerusalem, the violence in Germany had the superficial air of spontaneity, but was in fact well orchestrated by authorities endorsing mass barbarism as a permissible outlet for culturally long-simmering Jew hatred.

Many critics will say that this is a false analogy. They will say the Jews of Germany did nothing to deserve their punishment, but that the Palestinians’ murderous rage is justified by the “occupation” or by the “settlements.” But the analogy is correct. Jew hatred in the Middle East is old news and predates the occupation and the settlements. The hatred ebbed and flowed across the centuries, of course, and there were periods of relative peace and harmony. But no credible observer of the Middle East suggests that the anti-Semitic cancer afflicting the Arab world’s body politic today suddenly sprang forth after Israeli forces captured Jerusalem in 1967.

Nov. 10 also marks the 532rd anniversary of Martin Luther’s birth. It is no accident that Kristallnacht coincided with Luther’s birthday. Luther was one of the world’s great haters. You would be hard pressed to choose between the papacy and the Jews as the target for the more passionate of his rants, so virulent was his loathing for both, and both so extensively documented.

Luther describes the Pope, cardinals and bishops as “the whole brood of Sodom,” and suggests people attack the Church “with every sort of weapon and wash our hands in its blood.” Anticipating Charlie Hebdo, in 1545, Luther produced a book in collaboration with the painter Lucas Cranach featuring obscene depictions of the Pope involving animals and excrement. Leaving a Lutheran Council, he made a sign of the cross and called to the crowds, “May the Lord fill you with hatred of the Pope.”

When the Jews did not convert to his new faith, Luther boiled with rage against “this depraved and damned people,” urging civil authorities to “set fire to their synagogues or schools” and “throw brimstone and pitch upon them.” Sounds a lot like Kristallnacht. Indeed, according to Pinchas Lipide, a scholar of relations between Jews and a succession of Popes, “Hitler’s henchmen found a complete blueprint for their Aryanization project in Luther’s writings.” Later, at his 1946 trial in Nuremburg, Hitler’s chief Reich propagandist, pederast Julius Streicher, would attempt (unsuccessfully, happily) to use Luther’s Jew hatred, as expressed in his tract, Of the Jews and Their Lies, as a defence for promoting genocide.

Powerful and consequential as it has been, Islam’s prophet Mohammed’s hatred for the Jews, as expressed in the Koran, wasn’t a patch on Luther’s. Which, given the long view of history, can offer a glimmer of hope. For, outrageously bilious as he was, Luther cannot be blamed for the Holocaust. After all, Lutheranism spread to many countries, becoming the official religion of Sweden, for example. And though a fat streak of anti-Semitism runs throughout Swedish history, Sweden was not infected by the deadly toxin of murderous anti-Semitism that swept Germany, and in fact welcomed Jewish refugees escaping closing Nazi nets in Norway and Denmark.

Today, there are 72 million Lutherans in the world, one Christian branch amongst many others, and there are probably few amongst them who are even aware of the extreme Judeophobia their religion’s founder espoused. Hateful sentiments can be vanquished. Realistically, we will not see a similar transcendence in the Islamic world in our lifetime. Too many of them still want their Holocaust. But they won’t get it. Perhaps their great-grandchildren will refuse to hate. When Muslims will it, it will be no dream.