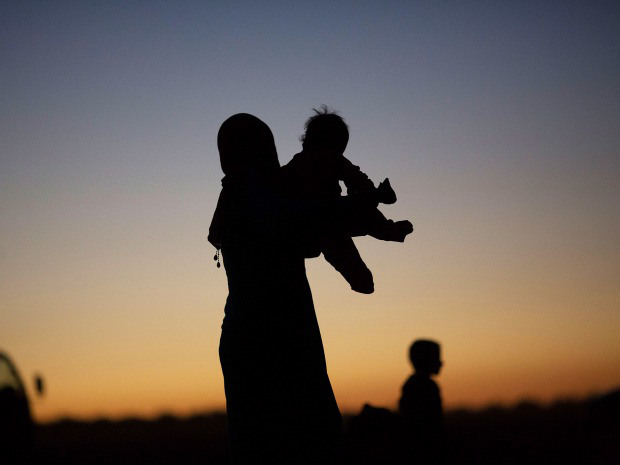 ISIS seeks to attract women suscectible to its extremist ideology

Terrorism is usually some men’s appalling idea of heroism, and we’re not quite sure what or how to think about women who want in on the action. Most of us want to believe women are innately peaceful creatures, more attuned to nurturing than killing. History has a way of subverting gendered stereotypes, though, and today we are faced with the disturbing phenomenon of girls as young as fourteen making their way to Syria to serve Islamic State terrorism in the support role of wives and baby-making machines.

The Canadian government has issued a call for proposals for research on the role of women in terrorist groups, amid reports that girls as young as 14 are being lured to Syria to serve as wives for Islamist State of Iraq and Al-Sham gunmen.

A call for bids by Public Safety Canada’s contracting office seeks research “to better understand why and under which circumstances women are recruited and the extent to which they become involved in violent extremist movements.”

The contractor is to submit a study by June 2015 that “will be used to inform policies and programs in the area of terrorism and counter-terrorism” and help police and community groups tackle the problem of violent radicalization.

Some Islamist groups are recruiting girls in Canada through social media, according to Abbee Corb, executive director of the International Institute for Radicalisation and Security Studies. They are especially seeking “ones that can express themselves, ones that are visibly pleasing because they want to use them to entice young boys to join.” Canadian police are investigating several cases of radicalized girls who have left for Syria.

Public Safety Canada has in turn issued a call for research into the role of women in terror groups, which “will be used to inform policies and programs in the area of terrorism and counter-terrorism.” The research should, amongst other things, illuminate the motivations behind their actions. We can find a clue in one Colorado 19-year old convert to Islam’s plea agreement statement that she and her recruiter “shared their view of Islam as requiring participation in violent jihad.” This suggests that it is more than mere “romanticism” that is fuelling these young women’s fervour.

Difficult as it is to accept, women are prey to ideological visions that depend on violence and mass murder for their realization. Researchers seeking precedents for these jihadi brides should read a 2013 book, Hitler’s Furies: German Women in the Nazi Killing Fields, by Wendy Lower. Lower found that for the most part women Nazis had been considered anomalies, like Ilse Koch, known as the “Bitch of Buchenwald” and Ilse Grese, “Beast of Bergen-Belsen,” who captured public attention in the post-war trials. But in her research she  found that they were only the extremist face of a widespread phenomenon. Lower’s book documents the almost entirely uninvestigated subject of women who were committed to furthering the Third Reich’s ambitions by any means necessary.

The Bloodlands of the eastern front – Poland, the Baltic States, Belarus and Ukraine – were home to the mass killings that characterized the war. Five hundred thousand German women surged to these sites, quite voluntarily, to participate as Adolf-Eichmann style administrators and expediters of massacres, or as nurses carrying out “mercy” killings, or – presaging the jihadi brides -as the lovers and wives of murderous men. They went east for all kinds of reasons – to escape lives of dull conformity or to jumpstart careers they could not have had in the normal way – but mostly to prove their devotion to Hitler and his racially triumphalist vision. In his 1934 Nuremberg Rally address, Hitler said: “What man offers in heroism on the field of battle, woman equals with unending perseverance and sacrifice, with unending pain and suffering.” I daresay the jihadi brides’ hearts are swelling to similar discourse on the Internet.

One theme in particular suggests a parallel with the jihadi brides. Lower says that the chance to participate in the Ostrausch (the “eastern rush”) “emancipated [women] from their emancipation.” The paradoxical statement refers to the fact that Nazism called for a form of ancestor-worship feminism, in which the female ideal was not the emerging prototype of what we call feminism, but an ancient, tribal version of it, woman as the revered, nurturing mother of the race. By enlisting in the murderous action, they signified their “cultural and biological Germanness.” Exploitation of their femalehood in furthering Nazi victory conferred social and ideological status from above (by Hitler for the German women, by Allah for the jihadi brides). In the biologically driven culture of Nazism, the pregnant belly was “the female badge of honour.”

Most people know of the Hitlerjugend - Hitler Youth – that indoctrinated German boys. But few are aware of its compulsory girls’ wing, the League of German girls, in which girls were trained to meet the standards of the ideal Aryan woman. High school girls received pamphlets with criteria for choosing husbands (the first question for a potential suitor: “What is your racial background?”). They studied phrenology to root out the racially impure. After years of this immersion, no personal humiliation was too insulting to be borne. Prospective brides of SS men – hundreds of thousands – were subjected to exhaustive racial background checks, invasive gynecological exams and domestic-skills tests, after which the results were sent to Heinrich Himmler for his personal stamp of acceptance or rejection. All those women knew exactly who they were marrying, and what evil they would be complicit in perpetuating.