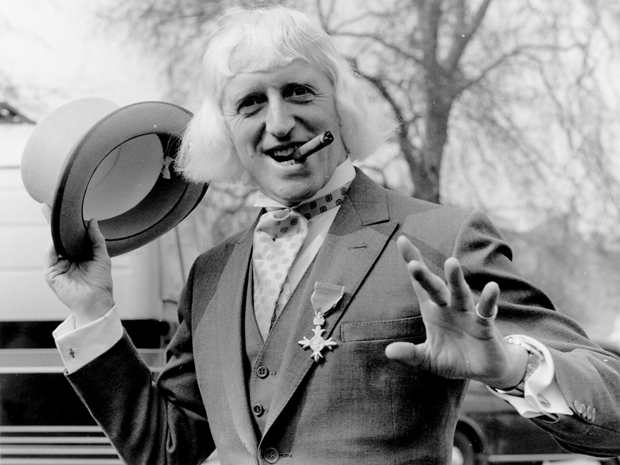 Jimmy Savile sporting his OBE after his investiture at Buckingham Palace in London in 1972.

Arrests are piling up higgledy-piggledy in the proliferating posthumous investigation of longtime BBC entertainer and pedophile Jimmy Savile (1926-2011). The latest suspects include a “glam rock star,” a radio producer, a photographer and a driver.

The widening scope of Savile’s own depredations (police claim 300 alleged victims), and of many others he apparently enabled, is shocking, shaming and frustrating by turns. Frustrating because a wicked man escaped justice for the murder of girlish innocence on a grand scale. Shocking and shaming that so many eyes willfully ignored the evidence before them.

How did Savile get away with it? The times, my dear, the times.

We tend to think that sexual freedoms are a progressive, one-way street, in which traditional moral strictures keep falling, one by one, before the force majeure of hedonistic permissivism. That’s not the case. Yes, we countenance promiscuity between all consenting adults, and even, sometimes, between youthful peers. But our society today is — at least where adult men and teenage girls are concerned — far more sexually conservative than in the morally dissolute 1970s.

Remember Woody Allen’s 1979 film Manhattan, which was nominated for best screenplay amongst other categories? In it Woody played a twice-divorced, 40-something comedy writer, Isaac, who falls in love with a preppy 17-year-old girl, Mary. They stroll romantically around New York without anyone giving them a second look — even though, in her girlish high-school uniform and knee socks, Mary is skirting Lolita territory. His peers, including Mary’s parents — and audiences — accepted the relationship without judgment. Would they today? I don’t think so.

To my relief, Allen finally gave up playing his alter ego in his early May-late December scenarios. Still, his squirm-inducing film, Whatever Works, with Larry David as Allen’s musty surrogate cohabiting with a baton-twirling southern airhead, said to be 22, but looking more like 15, emanated his life-inspired films’ usual disturbing vibes. The film aired in 2009 but, tellingly, Allen wrote it in the 1970s.

We no longer hear the song Stray Cat Blues by the Rolling Stones, with its less than charming lyric, “I can see that you’re 15 years old, I don’t want to see your ID,” but that few of us condemned it then should afflict the conscience of the many who didn’t. And Roman Polanski was certainly a criminal in 1977 when he raped 13-year-old Samantha Geimer after a photo shoot, but he wasn’t a cultural anomaly in presuming his fame entitled him to, in Woody’s words, “what the heart wants” (my colleague George Jonas took disproportionate flak when he said as much in a column a while back).

This was, after all, the heyday of “free love,” a libertarian view of sexual pleasure that, according to its more ardent enthusiasts, should be embraced by everyone, including children. In England, Jimmy Savile may have been emboldened by a group called the Pedophile Information Exchange (PIE). From 1974 to 1984, PIE openly campaigned on behalf of pedophilia as a culturally viable practice, arguing that adult-child sexual relations were harmless and should be legal. Their activists lobbied to abolish the age of consent and facilitated introductions between adults and minors.

PIE may have been a fringe group, but it was not without friends in high places. One affiliate of this unsavoury group, for example, was arch-feminist Patricia Hewitt, who went on to serve as, inter alia, Tony Blair’s Secretary of state for health until 2007. Can we imagine anyone with such associations today forging a respectable political career of any kind? (Or even unrespectable — Hewitt was recently suspended from the Parliamentary Labour Party over alleged political lobbying irregularities.)

Jimmy Savile’s predilections and activities were never a secret, as we are now learning at a furious pace from numerous sources. In his 1974 autobiography, Savile openly bragged about his serial seductions of young girls at his Leeds dancehall. One dancehall colleague joked that Jimmy was “either going to be a huge success or in prison for screwing 14-year-old girls.” That it was the former and not the latter can’t be blamed on the BBC alone. Savile’s unfettered, methodical depravity is an indictment of a sexually unbound social mania from which we have only partially recovered.