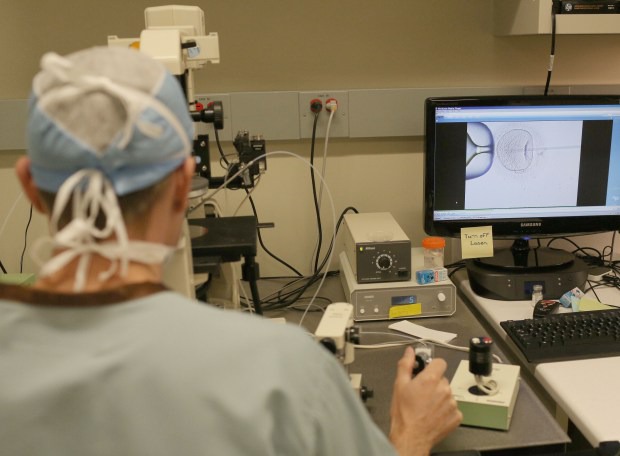 A few years ago I took part in a charity event at which the evening’s entertainment was a comic debate, the resolution being, “The shorter man is the better man.” I was assigned to the team supporting the motion. Casting about for humorous fodder, I stumbled upon the fact that many sperm-donor clinics will not pay for donations from men under 5’11” in height, since there is no demand for sperm that will produce boys of even average height.

I used the information to get laughs, but I didn’t find the implications remotely funny. In fact, I found the whole idea of a woman literally designing the physical parameters of a child bred to be fatherless pretty creepy and inherently selfish.

A Calgary fertility clinic – private, funded for those without sufficient money by the Generations of Hope Fertility Assistance Fund – has come under criticism because the clinic’s administrative director and highly regarded fertility specialist, Dr. Calvin Greene, refused to provide a white client with sperm from a different race on the grounds that donor children should have a “cultural connection” to their parent[s]. Dr. Greene stated, “I’m not sure that we should be creating rainbow families just because some single woman decides that that’s what she wants. That’s her prerogative, but that’s not her prerogative in our clinic.”

The clinic is distancing itself from Dr. Greene’s views, with a spokesperson denying the refusal reflects the clinic’s policy. The policy was changed a year ago, but remained on the website through an “oversight,” said Paula Arab. It has since been removed. “Ethics and ethical debates have always characterized the topic of fertility treatments and will likely continue to do so in future,” she said.

But has there really been a complete ethical debate on the subject of sperm donation? I don’t think so. Many Canadians doubtless reflexively consider Dr. Greene’s views to be racist, but they are worth discussing. His allusion to a child’s need for “cultural connection” certainly resonates in the adoption industry. Aboriginal children in the excellent care of white foster parents have been removed and returned to far less advantageous circumstances in aboriginal families on the sole ground that children require exactly what Dr. Greene advocates: a “cultural connection.”

I said at the outset that I consider single women choosing sperm donors over actual fathers to be selfish. I think the client behind this news story – known only as Catherine, her first name – exemplifies that selfishness. She would have given birth to a child different in racial appearance from herself. That appearance could well prove significant in the child’s social and cultural sense of herself. When a bi-racial child sees herself mirrored in both her mother and her father (even in the case of an absent father; at least she knows her father and mother once had a relationship), she knows who she is. A sperm donor child is already at risk for anomie and the sense that she has been denied half her biological inheritance. Why add this second impediment to her sense of identity?

In Elizabeth Marquardt’s 2010 study, My Daddy’s Name is Donor: A New Study of Young Adults Conceived through Sperm Donation, the first-ever comparative study of sperm-donor adults against control groups of adoptive and normative young adults raised with two biological parents, Marquardt found that two-thirds of sperm donor kids agree that “My sperm donor is half of who I am”; half are disturbed that money was involved in their conception; and about half have ethical reservations about the propriety of the system.

I don’t think we have had much of a national discussion on any of these problematic issues. Libertarians would say that since many fertility clinics — like the one in Calgary —  are private, we have no business judging what constraints they put or don’t put on their business. But the well-being of children is certainly the business of all Canadians. We don’t sell eyes or blood for ethical reasons, nor would we allow private clinics to do so. Yet we blithely allow the sale of life itself. As one adult sperm donor asks, “If my life is for other people’s purposes, and not my own, then what is the purpose of my life?” White, black or rainbow, that is the real ethical question.