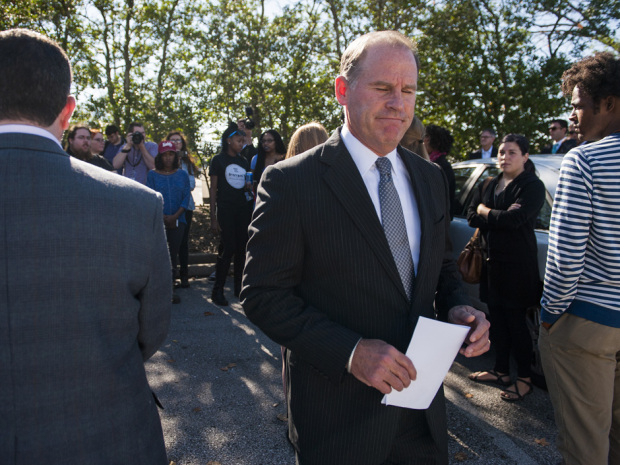 University of Missouri President Tim Wolfe walks away after speaking to members of Concerned Student 1950.

It’s too bad “white privilege” can’t be packaged up and sold. Otherwise young white males hoping for a future in academia might be able to sell theirs on eBay, and give themselves a fighting chance at a career. Because there’s no longer any guarantee that competence, liberalism and a clean record will protect you when aggrieved students need a handy scapegoat for their frustrations.

President Tim Wolfe of the University of Missouri system (of four colleges) announced his resignation Monday to the university system’s governing body, the Board of Curators, with immediate effect.

Racial tensions had been simmering on Missouri’s “flagship” campus in Columbia, where the student population is 79% white and 8% black, since September, when grad student Jonathan Butler, the student government’s black president, claimed racial slurs had been hurled at him from a passing pickup truck. Then, days before the homecoming parade, other black students accused a reportedly drunken white student of racial insults. A further provocation was a swastika drawn in feces in a dormitory bathroom.

Protests were organized to promote awareness of racial problems, and activism grew heated through the efforts of a group called Concerned Student 1950 – a reference to the year the university’s first black student was accepted. The group organized sit-ins, Butler began a hunger strike, and, — while there does not seem to be any actual link between Wolfe’s presidency and specific racist acts — he became a magnet for black anger. In the words of Democrat Representative Lacy Clay, Wolfe was “kind of oblivious to the fact that he was at the center of this.”

The 56-year old Wolfe, hired in 2011, is a former software executive who was the quarterback of his high school football team but had no previous experience in academia, although his father taught at the university. That background may help explain his failure to recognize the seriousness of the rapidly spreading brushfire. The campus is just 180 km from Ferguson, St. Louis, the site of black Michael Brown’s shooting death by a white policeman. Wolfe’s tipping-point mistake was to refuse to get out of his car to speak with students at the Homecoming Parade who wanted to confront him about the allegations of racist episodes. Hardly a firing offence in normal times, but what is normal any more, especially where white privilege can be invoked?

Wolfe held on as the student government demanded his resignation and many faculty members cancelled classes for two days in favour of a teach-in on race relations, but was ultimately forced to step down when some 30 black members of the football team, the Tigers, said they would not participate in team programs until Wolfe was fired or resigned. Cancelling their next game on Saturday would have cost the school more than US$1 million.  With the strike garnering national attention, and head football coach Gary Pinkel cancelling all practices and team activities in sympathy with Butler’s hunger strike, Wolfe’s tenure was clearly doomed.

There was talk of “healing” and “reconciliation,” Wolfe took full responsibility for the imbroglio, choked up in his farewell speech, said love of the university had motivated him to resign, and quoted from the Book of Psalms to boot: “God is our refuge and strength and ever-present help in trouble.” Shades of the Moscow show trials. I’m not exaggerating by much. Fortunately American university presidents don’t get a bullet in the back of the neck, but experience a similar sort of national humiliation.

Consider the list of demands put out by Concerned Student 1950, which were published in the Columbia Daily Tribune. This out for example:

We demand that the University of Missouri System President, Tim Wolfe, writes a handwritten apology to the Concerned Student 1-­9-­5-0 demonstrators and holds a press conference in the Mizzou Student Center reading the letter. In the letter and at the press conference, Tim Wolfe must acknowledge his white male privilege, recognize that systems of oppression exist, and provide a verbal commitment to fulfilling Concerned Student 1-9-5-­0 demands.

You have to love that little touch, “handwritten.” Is that not the perfect turning of the screw? And mind, this note is to be handwritten after he has resigned. It suggests the demands for Wolfe’s shaming are not an indictment of him personally, but an act of revenge on all men born with “white privilege.” Three hundred years of racial injustice would somehow be requited by having the university president subject to ritual humiliation. Not dialogue, or constructive strategies to improve race relations. Not justice. Nothing conducive to health and sanity in race relations. This is the mob speaking. Nothing good ever came from mobs.

Wolfe has company. At Yale University, some minority students have demanded the resignation of administrators Nicholas Christakis, master of Yale’s Silliman College, and his wife Erika, an early childhood educator at Yale. Their crime? They resisted infantilizing students by instructing them on which Hallowe’en costumes might be deemed offensive, and trusted students to decide for themselves. They even suggested students avert their eyes if they were offended. For this Nicholas was mobbed, forced to apologize and may – if certain angry students successfully intimidate the authorities – even lose his job. More road kill on the highway of white privilege.

It’s getting crazier every day on the campuses. A white male has to be very brave – or very dumb – to think liberal credentials and a sturdy office door are enough to protect him from him  when the lit match of racism falls on the the dry grass of identity politics. Revolutions always eat their children. It’s good to know there’s a welcome mat out for white men in other professions – like firefighting, the police and the Armed Forces. You know, places where the risk of death is relatively high.