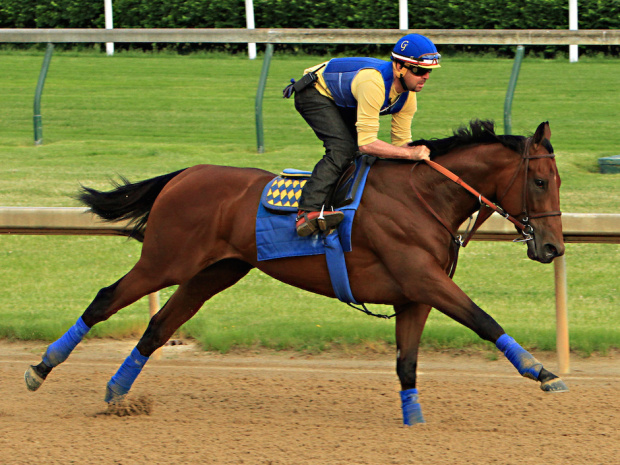 Barbara Kay: My revenge novel proved to be a balm

This year, American Pharoah — with his untraditional spelling — crossed the line first in the Kentucky Derby, beating out horses like Danzig Moon, Mubtaahij, and Ocho Ocho Ocho.

Fiction writers rarely wonder if they have what it takes to write a punchy opinion column. But plenty of non-fiction writers wonder if they have the creative juice for a work of fiction. I’m a lifelong reader, with eclectic tastes. I especially like mysteries and even though for many years I have had a wonderfully satisfying job writing opinion columns for a national newspaper, I long harboured the fantasy that one day I might write a mystery novel myself.
(--image--)
I kept hoping inspiration would strike, but it never did. Until, after ten years immersed in the world of competitive horse sport, my daughter’s career came to a shuddering halt with our discovery that her most trusted mentor in the sport of Three-Day Eventing had deliberately misled her in the sale of a supposedly high-level horse. The horse had a hidden medical defect, which dashed any prospects of my daughter fulfilling her elite ambitions, up to then a tantalizing possibility. A lawsuit proved useless when the American veterinarian who’d signed the incriminating medical report refused to testify for fear of making waves in the sport’s rather small, tight-knit circle of insiders.

If that mentor had only cheated me, I’d probably have gotten over it in due course. But she’d betrayed my daughter, and I was surprised by the ferocity of my inner tiger’s fury. In fact, I realized over time that if I didn’t find a way to channel my corrosive anger, I might end up with an ulcer.

Thus was conceived my “novel of revenge.” Over the ten years I had spent as my daughter’s sport-career manager, travelling to shows all over eastern Canada and the U.S., I had seen a lot and heard a lot, and even been directly exposed at times to the multiple conflicts of interest and abuses inherent in a rather cultish sport where there are too many professionals trying to make a living from too few participants.

A good mystery novel needs an interesting location that lends its own character to the plot. Mine is an isolated, full-service stable in a lush bosky stretch of Quebec’s eastern townships, an hour’s drive from Montreal, where talented athletes – both human and equine – train and compete at close quarters, with no distraction from the outside world. The stable’s isolation also ensures a limited cast of suspects when the murder victim is discovered.

But my plot is also set in an atmosphere of high political anxiety in the years preceding the acrimonious and bitterly-fought 1995 referendum on Quebec sovereignty, and that adds its own layer of tension and intrigue. My stable is a unique ecosystem for the organic interaction of WASPS, Jews and francophones – not to mention imports from England and Ireland – going about their horsy business with cordiality in French and English, but with, underneath the surface good will, pulsing cultural and linguistic tensions that threaten to undermine the wholesome atmosphere on which the stable’s prosperity depends.

The sleuth had to be a horse sport insider, someone who knows everything about horse sport, but who is not a stakeholder in the stable’s success – in other words, trustworthy, independent and objective. My protagonist, Polo Poisson, the former jumper champion at the heart of the mystery in more ways than one, was inspired by a true story. Everyone else is a composite of people I have known in the horse world, or characters I could easily imagine from my own cultural world, Jewish Montreal. Except for the murder of the human victim and one horse victim, every awful thing that happens to horses in this novel came directly from real life.

Composing my novel of revenge was the best remedy I could have prescribed to dissolve the unhealthy wish for revenge my negative experience produced. As I wrote, the motivating anger fell away, and the joy of creation superseded it. As a writer, this was the most challenging, but also the most fun I have ever had in front of a computer. I hope some of my readers will taste the lemonade I made from my horse-world lemon.