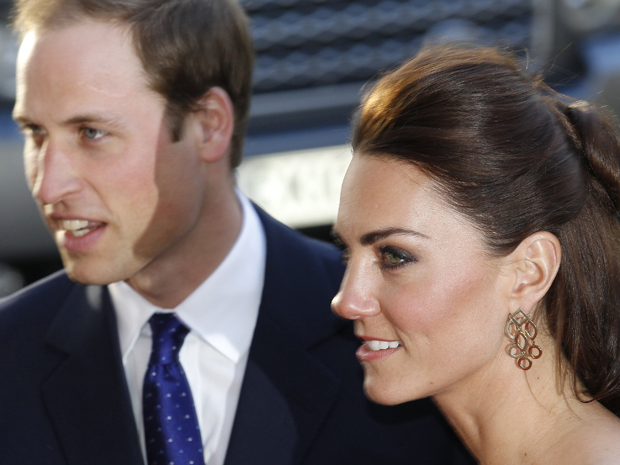 Barbara Kay: Ode to the monarchy

Britain's Prince William and Catherine, Duchess of Cambridge arrive for a reception at the Imperial War Museum in London on April 26.

In his new book, The Secret of the Crown: Canada’s Affair with Royalty, John Fraser describes a 1953 scene in which his not-quite nine-year-old self is sprawled prone in front of “IT.” IT is his neighbourhood’s first TV. His parents have bought it especially for the momentous program they had been waiting with bated breath for months to watch.

The program was of course the June 2 coronation of the young Queen Elizabeth, opened to the public via the new technology for the first time in history. The lengthy anticipatory hype — Fraser lovingly recalls a Coronation coach set his granny had bought him for Christmas — had done its work on the impressionable boy. He was enthralled by the unfolding onscreen drama that was so majestically distant in time and station, and yet, through the miracle of television, so intimate and personal.

And so, even though Fraser pitches the book as a polemic — “to confirm to those who believe in the Crown in Canada why they are wise to hold on to that belief” — and even though he adduces good evidence to support that claim, it is Fraser’s personal lifelong romance with the Queen and the monarchy that emerges as the charming heart of this delightful book.

Being of the same vintage as Fraser, I too have nostalgic memories of the Coronation. Mine feature twirly, bias-cut skirts with Elizabeth’s image plastered all over them, plates, teacups and spoons adorned with her or her and Philip’s image or crowns, as well as a great deal of classroom time devoted to the grand event. I totally “get” Fraser’s attachment to the Queen and to the institution, and so will any Canadian whose entire conscious life has been rounded by her reign.

Over the years I have read many books on the monarchy. Not long before chancing on Fraser’s book, I read Robert Hardman’s magisterial tome, Our Queen, and thought there was absolutely nothing new for me to learn about Elizabeth’s reign. But while Hardman’s exhaustive exploration includes may wonderful anecdotes about Elizabeth’s travels throughout the Commonwealth, including bits about Canada, his perspective is always trained on the effects of her adventures on Britain.

Fraser’s fresh and informative contribution allows us to view Elizabeth through an entirely Canadian lens. Fraser is a big fan of Prince Philip, as am I. I enjoyed a description of Philip visiting Massey College, where Fraser has been Master since 1995, and his witty repartee with students there, something Hardman would not have known of. Philip is frequently pounced on for his verbal gaffes, but rarely credited for his seven decades of self-effacement, his intellectual depth and his political wisdom. Fraser notes that it was mainly Philip who navigated the Royal Family through the roiling, media-whipped waves of Diana’s era. A realist and a pragmatist, he acknowledged, and convinced others, that the age of deference was over. He went on to negotiate an entente with the pitbull press; they backed off from extreme intrusiveness in return for reasonable access to the Family’s hitherto private routines and activities.

Fraser’s humanizing anecdotes of the Royals will remain with the reader long after the polemics are forgotten. Fraser treasures a brief conversation he enjoyed with the Queen at Belvedere House, the short-reigning Edward VIII’s “bolthole.” For such an “ardent” royalist, it was “close to reaching nirvana.” Fraser summoned the courage to ask Queen Elizabeth’s advice as to where he and his wife should attend Sunday services, since, as head of the Anglican Church, “I thought you’d know the local parishes.” “I know them all,” the Queen returned crisply, and after a moment’s reflection, invited them to the Chapel Royal at Windsor Castle.

I’ll leave it to more detached critics to assess Fraser’s case for the monarchy, because he had me at “hello,” so to speak. I’m not able to gauge the effect of this book on immigrants and the young, for whom the monarchy is at best a puzzling anachronism. Canada has no objective need for a monarchy, but I am dead certain, like Fraser, that we would suffer a grievous cultural wound if we let it go. Like Fraser, “I am very suspicious of change for change’s sake.” In its way, this little book is not only a paean to the monarchy, but an apologia for the conservative view of life.