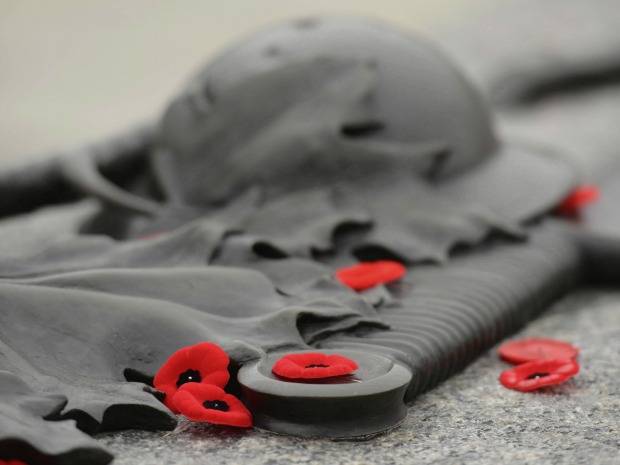 Poppies lie on the Tomb of the Unknown Soldier at the National War memorial in Ottawa.

Normally, on Remembrance Day, my thoughts are with Canada’s fallen soldiers. This year, having just seen the documentary film, Broken Soldiers, I find myself brooding over war’s suffering survivors.

The annual Remembrance Day ceremony at the National War Memorial is always well attended, but will have extra significance this year because Canadian soldiers have begun arriving home from Afghanistan.

A mission in Kabul to train Afghan soldiers, following five years of combat in Kandahar, is drawing to a close in March, and all boots are expected to be out of the war-ravaged country by summer.

Complaints about the way Canada has accommodated its returning troops have lead to a grassroots campaign among veterans to turn their backs on federal politicians laying wreaths at cenotaphs across Canada, a gesture intended to highlight the way the federal government has similarly turned its back on veterans, critics say.

By telling the story of veterans who have received inadequate compensation for their sacrifice, Broken Soldiers exposes disturbing gaps between self-congratulatory official government rhetoric and the reality of sick, homeless or dysfunctional vets, who cannot gain traction with a bean-counting bureaucracy bent on saving money rather than serving their constituency. These victims feel betrayed by their country.

It is reflective of a government that appears to favour show over substance when it comes to veterans affairs. On Friday, veterans Affairs Minister Julian Fantino announced up to $50,000 to help build a monument honouring Canadians  soldiers who fought in Italy during the Second World War. Today a report indicates the government is considering bestowing “battle honours” on those who fought in Afghanistan. All week the minister was busy at dinners and receptions marking Canadian war contributions, noting that this year is the 60th anniversary of the Korean War armistice.

Yet veterans seem unimpressed by the words and promises. In Chilliwack, B.C., veterans say they will turn away when the local MP lays a wreath to signal the fact they feel Ottawa has turned its back on them. A Royal Canadian Legion branch in Keewatin, Ont., has put its building up for sale under the growing cost pressures that face branches across the country. Veterans in Windsor will rally to try and save the local Veterans Affairs Office, one of nine set to close across the country in February.

While memorials are nice enough, veterans are upset at the more concrete actions the Conservative government has taken, which they say will leave them worse off than before. One of the stories related in Broken Soldiers is Steve Dornan, who suffers from non-Hodgkins Lymphoma, which he plausibly claims to have contracted in Bosnia as a direct result of contact with equipment contaminated with depleted uranium. Dornan’s claim was backed up by numerous medical reports, but while agreeing Dornan was exposed to the depleted uranium, bureaucrats in the claims department (notably detached from the military) refused to agree the result could be harmful.

Astonishingly, the civilian bureaucrats evaluating disabilities like Dornan’s have no medical credentials or understanding of military life in war conditions or illness in general. The Chief of Mental Health, for instance, is not a psychologist, just an administrator, yet he oversees the development of programs for the psychologically injured.

According to Pat Stogran, a retired 30-year veteran, and ombudsman at the centre of veterans’ issues from 2007-10, Veterans Affairs Canada’s mandate commits it to giving veterans the “benefit of the doubt,” if nothing contradicts their submitted documentation, clearly not the case with Dornan. In reality, says Stogran, the standards for the burden of proof are inordinately high.

In 2006 the government inaugurated a “New Charter” for veterans, touted as a “living Charter.” An advisory board issued 86 recommendations in 16 areas for 400 changes to “put the living Charter into action.” The paid advisors were ignored, however, and exactly 4 changes were made. Critics agree that the New Charter needs rebuilding from the ground up.

As it stands, for example, the New Charter awards a one-time lump sum to replace the pre-2006 lifelong pension. According to veterans’ rights crusader Sean Bruyea, a Gulf War veteran (whose “long, strange fight” is a fascinating story in itself), this change is a bust. Only 137 individuals have received the 100% lump sum award of $298,000 since 2006. The average payout has been about $45,000. Veterans were far better served under the old plan, with an average tax-free payment of $31,000 for life, and additional amounts for children and spouses. The current veterans ombudsman, Guy Parent, says the Charter is filled with flaws and will leave hundreds of the most severely disabled veterans in a worse financial condition after they turn 65.

“It is simply not acceptable to let veterans who have sacrificed the most for their country…live their lives with unmet financial needs,” he said in a recent report urging numerous changes.

Recently the government proudly announced two new initiatives. The first pledges to give priority to veterans seeking civil service jobs. But Mr. Parent points out that thousands of veterans are incapable of working due to injuries suffered during their service. And since hiring freezes are in place over most federal departments, “priority” consideration for frozen jobs is not of much use. The other initiative increases funding for vocational rehabilitation programs to $75,800 per veteran. But the fine print belies this seeming generosity. The money is allocated at $2 million over five years, spread over 1,300 veterans. That comes to $1,500 each, unless 40-some veterans get all of it.

Today there are more than 76,000 veterans suffering from lifelong disabilities springing directly from their military service, a casualty rate of more than 10%. Mr. Bruyea asks (in an e-mail interview with me): “What are the long term implications to not assisting all veterans to transition out of the military? What are the opportunity costs?…We don’t know because VAC refuses to track suicides or any other aspect of the more than 600,000 veterans and serving members who are not directly receiving VAC benefits.”

The reality, he says, is that less than 1% of Canada’s veterans are receiving any economic benefits from VAC. VAC recognizes only 1,428 veterans as eligible for economic support until age 65, a mere 0.2% of Canadian Forces veterans. It is estimated that fewer than half are receiving the seriously-injured allowance to which they are entitled.

Other federal actions also rankle. Reports suggest veterans are being discharged before they reach the 10-year limit at which they are eligible to receive a pension. And a fund to help pay burial costs for veterans only applies to the most hard-up of cases, excluding almost anyone short of abject poverty.

Canada does not compare well with similar other Commonwealth countries in its veterans’ compensation packages. For example, Ottawa provides economic and compensation support to just 11% of Canadian Forces veterans. Australia – with half the number of veterans as Canada – provides similar benefits to 50% of them. The Australian budget for these programs alone, at around $6 billion, is almost twice Canada’s overall Veteran Affairs budget of $3.5 billion for all programs.

In Broken Soldiers, Jeff Rose Martland, president of OurDuty.org, “the only citizen-based advocacy group working for fair and adequate treatment of Canada’s veterans,” makes a good point: If the government imposes limits on compensatory coverage, then by rights the “client” – the soldier – should have the right to impose a limit on the risks he is willing to take. But all military people accept extremely high risks to life and limb as an integral part of their job. In principle that simply isn’t fair.

Dennis Manuge, successful lead plaintiff in a class-action lawsuit between disabled veterans and the government, and one of the featured subjects of Broken Soldiers, often comes to sit and meditate at the Tomb of the Unknown Soldier in Ottawa. He feels the Unknown Soldier’s presence encouraging him, as if to say: “Your battle is a worthy one and you’re doing right by me.” We, who are neither soldiers nor unknown, should assure our disabled vets that we believe their battle is a worthy one. And doing what we can to ensure that our government “does right by them.”