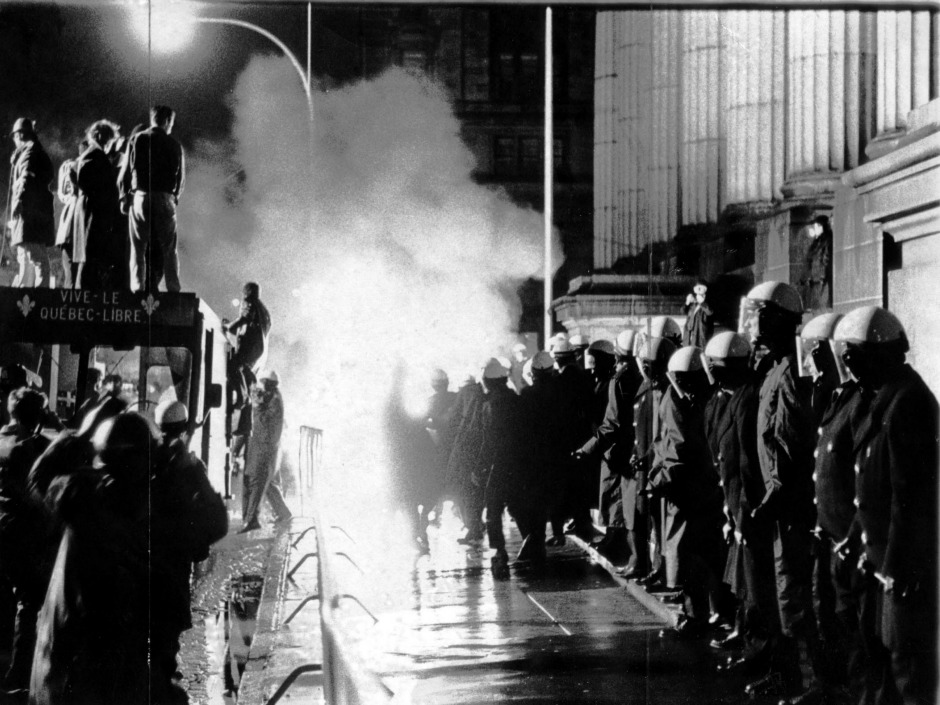 The scene of a firebomb at a Montreal courthouse on November 8 , 1969.

When the Standing Committee on Canadian Heritage recently was tasked with reviewing the way Canadian history is taught to children, Quebec’s politicians and pedagogical mandarins immediately made their displeasure clear.

One minister huffed, “If their wish is to control the teaching of history, they will certainly hit a wall in Quebec.” And a college historian, alluding to the Conservatives’ emphasis on military history, said: “It’s as if they wanted to create a false, American-style image of Canada.”

Prime Minister Stephen Harper hastily denied any intention of the Committee to tell provinces how to teach history. “We don’t have the will or the power to do it,” he said. Maybe so. But it wouldn’t hurt to take a peek at what Quebec high school students actually learn about Canada, so political candidates understand what they are up against in winning hearts and minds at election time.

In 1994, Université du Québec à Montréal linguistics professor Monique Nemni analyzed Quebec’s high school history and geography texts. She found that the words “Canada” and “Canadian” had pretty well been expunged from all programs, no matter which political party was at the provincial helm.

The one compulsory geography text Nemni studied creates the illusion that Quebec is a country. The text’s stated goal is to ensure that “students understand … the Quebec space,” but there is no mention of the “Canadian space.” In one exercise, students were asked to “compare the surface area of Quebec with that of a few other countries” (not provinces); while Quebec’s “regions” are compared with Canada’s other provinces.

The compulsory history text “focuses on an understanding of the evolution of Quebec within the Canadian, North American and Western contexts,” as if Quebec had the same relationship to all western countries. The last unit is “Modern Quebec (1939 to the present)” with no mention of “modern Canada.”

Handling of the October Crisis of 1970 was particularly revelatory. The episode was treated in six different texts. In one, the Front de Libération du Québec (FLQ), which was responsible for many bombings and a political assassination, is called a “clandestine [not terrorist] movement.” Their victim, Pierre Laporte is “found dead” (the passive voice disembodies the crime). Another text says: “On Dec 28, Pierre Laporte’s kidnappers [not murderers] are captured. They are then brought before the court” (no mention of their conviction).

Of the six texts Nemni analyzed, four don’t mention Pierre Laporte was killed. Only three mention the words “bombs” or “terrorism.” The other three don’t explain why there was a crisis. Only one of six mentions that the FLQ murderers were convicted of murder. Two of the six don’t mention that the War Measures Act (WMA) was proclaimed at premier Robert Bourassa’s request. None mentions the fact that the WMA had massive popular support.

Since 1994, Quebec pedagogues have continued to discuss and debate directions in Quebec history teaching, but all indications point to refinements in creating citizens who put their Quebec identity before their Canadian identity

In the first half of the 20th century, under the influence of the clergy, emphasis in teaching history was placed on Quebec’s “bonne entente” with Canada, with points of friction minimized.

Then came the school of political nationalism, whereby the Conquest of New France re-appeared as the great catastrophe that could only be redeemed by Quebec independence. Anti-Canadianism crept in apace.

Since 1994, Quebec pedagogues have continued to discuss and debate directions in Quebec history teaching, but none has led to a more federalist vision. All indications point to refinements in creating citizens who put their Quebec identity before their Canadian identity, if they are encouraged to consider themselves Canadian at all.

In the (only) 12 pages on Confederation Nemni studied, students are asked to explain, “Why is Lower Canada opposed to the legislative union?” But in fact, French Canadians did support the union. All the texts teach Bill 101, but three of the six don’t mention the Official Languages Act, which makes English an official language in Quebec. None mentions that French is a protected language across Canada.

“Canada Day” is never referred to by that name, only as “July 1.” The chapter concludes with a unit entitled, “Must we celebrate July 1?”At the end, the student is asked, “Last year, did you celebrate on July 1? Why?”

Given the tenor of Quebec’s history texts, that last syllable sounds more accusation that question.