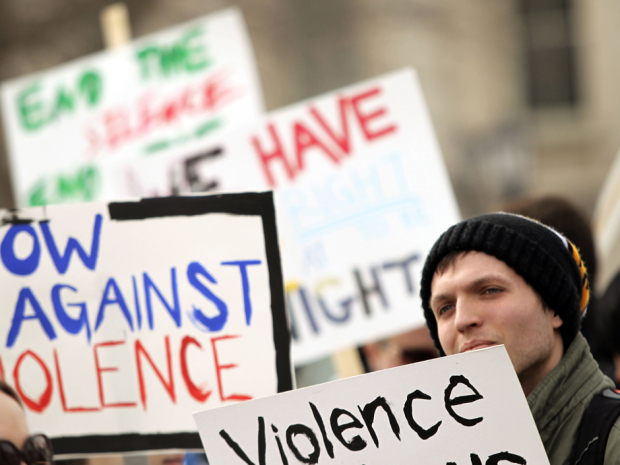 Barbara Kay: Rape culture and the problem with numbers

A student demonstrates during a rape and violence awareness rally at the University of Iowa.

Most mainstream news publications publish, you know, news. Except when it’s about “rape culture” on campus, when no news is also considered news. Case in point: following a winter survey they initiated last year on campus sexual assault, CBC News this fall conducted a survey of 87 post-secondary institutions to investigate the reporting of sexual assaults in 2014 on and off their campuses.

Since the received activist wisdom on the subject assures us that one in four (or five, depending on the polemicist) women on campus will be sexually assaulted during her college tenure, the researchers were chagrined to find that the actual number of reports came to 700 – averaging out to 1.85 per 10,000 students – a figure that jibes with rates of sexual assault in the general population. In 16 schools – seven in Quebec and nine in western Canada – not a single sexual assault has been reported in the last six years.

To feminists, there can be only one explanation for the dearth of reports, and certainly not the explanation that sexual assaults are either rare or considered not worth reporting by those involved. “It’s undercounting” is the immediate conclusion leaped to by University of Ottawa criminology professor and domestic violence researcher Holly Johnson. “It’s not counting what is the true experience of students, because there is no campus in which this doesn’t exist.”

The CBC survey is very much in line with findings from American surveys. Some months ago 2015 the Association of American Universities (AAU) conducted a survey at Harvard and 26 other colleges, asking quite specific questions. Sixteen percent of female seniors at Harvard checked the box for “nonconsensual sexual penetration,” but of that group, 65% did not report the incident to any rape hotline, Title IX officer, or law enforcement on or off campus, giving the reason that they did not think the experience serious enough to report.

Commenting on this very high figure of non-reportage in her Nov 2 Weekly Standard feature article, “An Assault on Common Sense: the phony campus rape crisis,” Manhattan Institute fellow Heather MacDonald says such a statistic is “inconceivable in the case of real rape.”

In 1950 many young women were ashamed to admit they had had sex out of wedlock. But they certainly aren’t ashamed today, and they have all nowadays been continually exposed to well-organized campaigns of consciousness-raising on what does and what doesn’t amount to consent in sexual relations with men. Universities take such accusations very seriously – so seriously that young men on campus are rightfully fearful of injustice when they are accused of sexual assault, as universities generally privilege the word of the female reporting over the accused. It strains credulity that two-thirds of university women today aren’t reporting assault out of fear or shame.

So if they are not reporting in these huge numbers, perhaps we may assume that they might actually be telling the truth? That in their own eyes, the experience was not an assault, but more like regretted sex – or at the very least may we not give such a theory equal weight in assessing the numbers, as we would for any other crime?

The disparity between what feminist activists consider to be rape and what ordinary women think it is goes back to a famous 1982 survey by Kent State psychology prof and uber-feminist Mary Koss. Her findings were based on dubious methodology and typology, to say the least. For example, 73% of those she characterized as rape victims said they had not been raped. And 43% of the alleged victims said they had continued to date their alleged rapists. Inconceivable in the case of real rape.

MacDonald notes that all of the six rape allegations reported to Harvard’s campus police in 2014 were proven to be “unfounded.”

Nevertheless, the one-in-four meme took hold. The survey was published in Ms Magazine in 1987 and “took the universities by storm,” producing what can rightly be termed a rape-culture industry: expensive, over-staffed rape-crisis centres, hotlines, rallies, conferences, sexual-assault procedures, consultancies and inter-collegiate sexual-assault networks.

One caveat we should harken to with sexual-assault surveys like Koss’s and the AAU and, I feel sure, the CBC’s, is that the response rate is usually pretty low. In the case of the AAU, the response rate was 19% for the 27 colleges. That means the findings come out of selection bias: i.e. those most likely to take the time to fill out the survey are those for whom the subject is of special interest, whether interest borne of experience or from ideology.

Another is the wording of the questions. The AAU, for example, asks if women have had difficulty with men “ignoring your cues to stop or to slow down.” “To stop”? Okay. But to *slow down*? Please. This is not an objective exercise, if the “researchers” are scraping that far down the barrel of normal sexual relations to get the percentages they want. And they are not doing women any favours by suggesting that insufficiently languid but consensual sex is immoral rather than a mere irritant.

MacDonald notes that all of the six rape allegations reported to Harvard’s campus police in 2014 were proven to be “unfounded.” Not one survived law enforcement investigation. So there is obviously tremendous confusion in the minds of young women as to what constitutes a sexual crime; and no wonder, when, as MacDonald observes, you have a Title IX officer telling the audience at a lecture on sexual assault at Washington and Lee University that there is an emerging consensus that “regret equals rape.” Yet MacDonald believes – and from everything I have read (I have read a lot) – “Nearly all [alleged rapes that have gone public] involve seemingly voluntary drunken hookups that the female partner comes to regret” (especially when she is emotionally involved, but the partner is not).

Why, in the face of all the evidence pointing to real, but very low rates of what most people with common sense would call anything resembling literal sexual assaults, do ideologues like Holly Johnson continue to insist that skimpy campus rape news is clearly evidence of news that has simply gone unreported?

It’s very simple. As noted above, academic stakeholders in the bogus rape-culture crisis are making out like bandits in terms of jobs and research grants. The bigger the alleged rape crisis, the more lucrative the rape-crisis industry. Internet guru Clay Shirky has described the syndrome in a nutshell: “Institutions will try to preserve the problem to which they are the solution.” Ain’t it the truth?