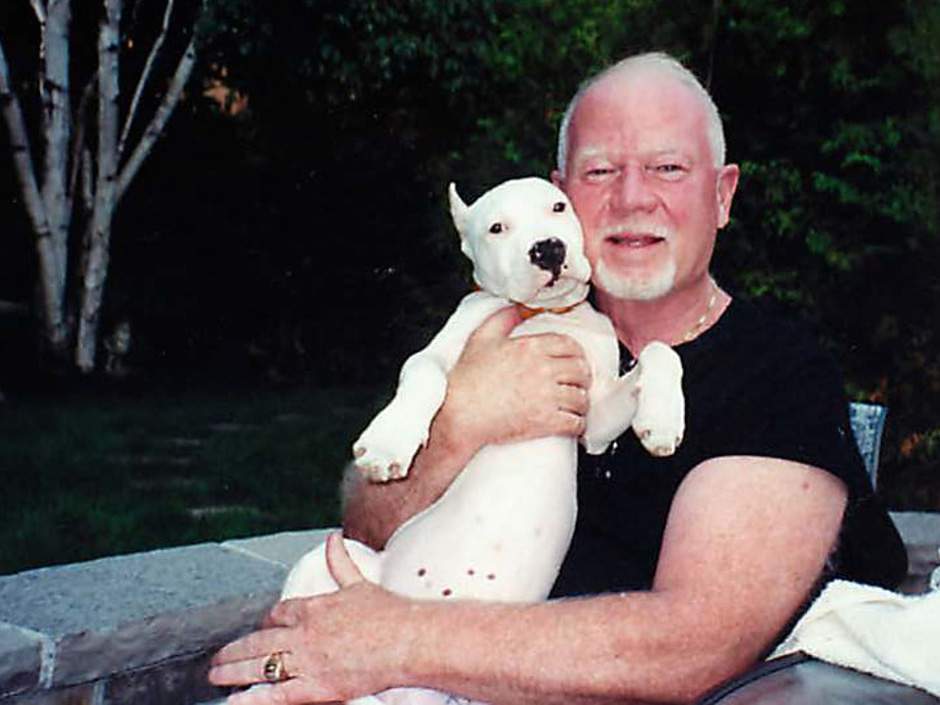 Don Cherry poses with his dog Blue in this undated handout photo.

Don Cherry has a big mouth, which annoys some people and delights others.
Since I have no particular interest in hockey, the familiar sound of Cherry rants has up to now been background static in my life. But Cherry got my full attention this week when he set himself up as the point man on a pit bull rescue operation.

Last October police and the Ontario SPCA launched an investigation that led to 300 charges of dogfighting (which is illegal) in the Tilbury, Ont. area against four people, and this week a fifth person was charged after further searches led to the seizure of seven more pitbull-type dogs. The SPCA has filed an application in court to have the dogs, 21 in all, destroyed, arguing they pose a public safety risk.

Do public safety a favour and stick to hockey from now on.

Cherry has aligned himself with a group called Animal Justice to raise funds for a legal intervention to save these “innocent and beautiful” dogs’ lives, presumably so that they can be rehabilitatd and rehomed.

Animal Justice has in the past pursued some worthy causes –­ puppy mills, the shark-fin industry, even the sexual abuse of animals -­- but they are out of their depth on this issue, for the nature of pit bull type dogs is a highly politicized issue, and it is clear that Animal Justice has been misled by propaganda put out by the pit bull advocacy movement, which relentlessly perpetuates the myth that pit bulls are intrinsically no different from other dogs, and that their bad reputation comes from their association with lowlifes like dogfighters and other abusive owners who “train” them to be vicious. (They never explain why dogfighters never try to “train” Labrador Retrievers or any other breed of dog to fight, but will only use pit bulls.)

To bolster their position that it is safe to rehome experienced fighting dogs. Animal Justice references the case of NFL player Michael Vick, convicted of dogfighting related offences in 2007. They cite the 51 dogs rescued from Vick’s operation, stating on their website, “None of the Vick dogs have been reported as injuring humans since their rescue, and many of them have even become therapy dogs.”

Here are the actual facts on the Vick story. It is true that the ASPCA, Best Friends Animal Society and other organizations did not euthanize 47 of the 51 pit bull terriors found in Vick’s kennels. That was because most of the dogs found were puppies or very young, uninitiated dogs.

The one actual fighting dog rescued was euthanized, and properly so, since a pit bull that has experienced combat generally has a taste for more, since that is what they have been bred for.

The ASPCA and Best Friends (a fiercely ideological pro-pit bull organization) collected $1 million from Vick as part of a court settlement. Much of it was applied to finding extraordinarily dedicated owners for the rescued dogs (i.e. pit bull advocates), who were willing to give unusual oversight and attention to the dogs: ­that is, an artificial environment as compared to normal homes — in order to ensure that they maintained a perfect record of non-harm. None of the dogs was re-homed with average people as an average companion pet.

More than 80% of the animal shelters in the U.S. have less funding per year for all of their programs combined than was invested in the Vick dogs, considered by pit bull activists like Best Friends to be worth the investment in order to create the propaganda gold it has turned out to be, with Don Cherry and Animal Justice a case in point.

As for “therapy dogs,” there is presently no regulation whatsoever on who can call their dog a therapy dog and who cannot. If my dog holding out a paw makes a sick child smile, I can call him a therapy dog. Pit bull owners whose dogs have harmed other animals or people are notorious for slapping little “therapy dog” vest on their miscreants and photographing them making nice to kids to garner sympathy for their dogs and take the focus off their dogs’ victims. It’s a cynical ploy, but it works with gullible animal lovers, as we have just seen.

People who look up to Cherry are going to think he knows what he is talking about and some of them may possibly believe adopting a dog bred for impulsive aggression — or worse, one who has actually experienced it, is the same as adopting any other dog. It is not. The epidemiology around pit bull-type dogs and the animal and human carnage they have caused and continue to cause, is settled science. Pit bull activists can rant until the cows come home about them getting a bad rap, but genetics are what they are. And no amount of “rehabilitation” can rewire a dog’s brain. In 2015, 9 per cent of canine-related human deaths were by dogs rehomed by county operated shelters or rescues, most of them by pit bull type dogs.

Cherry says he doesn¹t understand why the SPCA wants to euthanize the 21 dogs, and asks, “Am I missing something here?” Yes, Don, you are missing just about everything here, because you are an ignoramus in this area. Do public safety a favour and stick to hockey from now on.