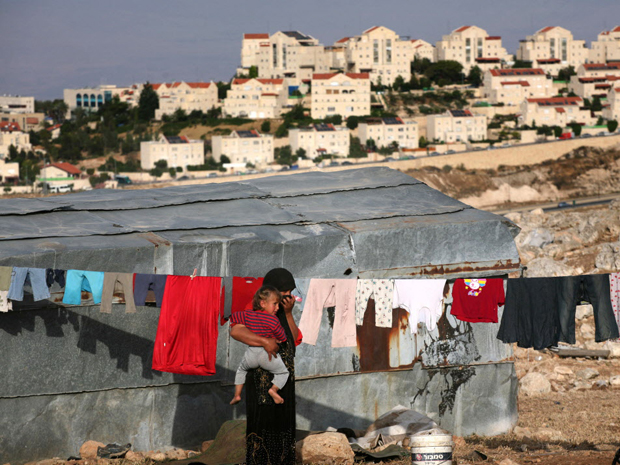 Barbara Kay: The Bedouin are blooming in the Israeli desert

A Bedouin outside her hut near a Jewish settlement.

“Beware of camels near the roads,” said a sign in Hebrew, Arabic and English as we rolled through the tawny moonscape of the Negev desert. Minutes later, as if cued, a camel appeared near the road with his owner, a figure straight out of Bible-era casting (except for the cell phone).

I spent nearly all of last week in the Negev on a media mission sponsored by Ben Gurion University (BGU), held at their main campus in Beersheva and a satellite campus in S’de Boker. BGU’s mandate is to study and advance sustainable desert life in all its myriad environmental and social forms.

I was particularly sparked by the work being done at BGU’s Robert H. Arnow Center for Bedouin Studies and Development.

Eighteen tribes of Bedouin Arabs comprise a quarter of the population of the arid Negev region in Israel’s southern half — about 190,000 out of 750,000. Attached to land, but not the dream of statehood, long accustomed to the feudal inequality of foreign suzerainty, they are not overtly hostile to Israel.

A number of Bedouin — perhaps 20% or more — even volunteer for military service, less for love of Israel than employment opportunity, but still a symbol of social possibilities as yet unrealized. Of all the Arabs Israelis deal with, the Bedouin have the most potential to be peaceful co-citizens. Yet it’s no secret that the Bedouin have been badly served by Israel, just as they were by the British in the Mandatory period and by the Ottomans before the Brits.

The Bedouin are the largest social group in Israel with no formal status. They have no right to own land (nor do Jews, as the state owns 93% of all land, but Jews can lease land for 49 years with virtually assured extension, while Bedouins lease seasonally with no assurance of continuity); they can’t run for local office; and their relatively few schools are far inferior to Jewish schools.

Worse, only nine of 45 Bedouin villages are “recognized.” The rest are purposefully “unrecognized.” That means no infrastructure: no electricity, no sewage facilities, no decent roads. Effectively squatters, these Bedouin can’t buy or sell or erect permanent homes, so live in squalour. They can’t build up human capital, as almost three-quarters of them are virtually uneducated, especially the girls. They scratch out a living raising goats or in marginal, low-paid jobs. Yet their fertility rate is high; families of 15 are not uncommon.

While the government drags its feet on justice for Bedouins, some Bedouins are taking positive action on their own behalf. And they are showing how quickly people can go from near-primitive disempowerment to full cultural parity when exposed to a decent education.

For decades bright, ambitious Bedouin students had to go to Arab schools in the north to get the kind of schooling available to Jewish children everywhere in Israel. In 2009, local Bedouin academics and university post-graduates founded the merit-based Ah’d High School for Scientific Excellence near the Bedouin town of Hura, where 200 teenagers study advanced science and math. (Ah’d, an acronym, means “pledge” or “promise.”) Accepting only the “best of the best,” the school graduates students performing brilliantly by any standard.

BGU’s Center for Bedouin Studies and Development has achieved dramatic success with their program for Bedouin students. They focused on the girls, as educated women are the key to cultural change, luring them with scholarships and individual attention. In the early 1990s there were no more than 20 Bedouin students altogether. In 2000 there were five female BAs and no female MAs. By 2011 there were 213 female BAs and 39 female MAs.

Their stories are inspirational. Social worker Dr. Nuzha Allassad-Allhuzeel completed a PhD thesis in 2009 called “The effect of urbanization on three generations of Bedouin women.” Dr Sarah Abu-Kaf, the first Bedouin clinical psychologist in the region, began her studies in 1995, when there were only five Bedouin women at BGU. Married with six children, she wrote her doctoral dissertation on “Vulnerability to emotional distress among Bedouin students and Jewish students.”

Israel’s first prime minister, David Ben Gurion, chose the Negev for his home, because he believed the blooming of the desert would be the making of Israel. He had agricultural miracles in mind, and many have come to pass. Now the seeds of a cultural miracle have been planted in a harsh climate. If they are tended with patience and constancy, the fruits produced will be sweet.