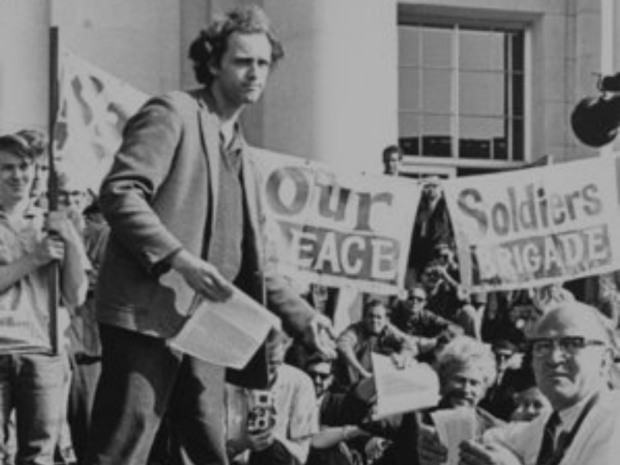 Barbara Kay: The ‘Free Speech Movement’ was a sham

The real goal was to colonize campuses with authority figures who hated 'Amerika'.

Those of us who were young adults at the time well remember the galvanizing effect on students everywhere of those culturally game-changing protests at the Berkeley campus of the University of California. Their leader, Mario Savio, compared the Free Speech Movement to the civil rights movement, the university administration to the “Bull Connors” of the racist south and the campus cops to “Eichmann.” That stuff was edgy then.

Even at the time, mind you, as a student at the University of Toronto, I was puzzled by the protesters’ ferocity. Who exactly at liberal Berkeley was repressing free speech? In retrospect, nobody. Ironically, today’s stringent campus speech codes are enforced by the very individuals who participated in those protests 50 years ago, and who then went on to become “tenured radicals.”

One of that crowd, a featured speaker today at Berkeley’s Free Speech Movement anniversary rally, is Bettina Aptheker, a feminist studies professor at the University of California’s Santa Cruz branch. Aptheker ranked second only to Savio in movement leadership, and her history helps us understand just what a misnomer the “Free Speech Movement” was.

Bettina is the daughter of Herbert Aptheker, founder of the American Institute for Marxist Studies and chief theoretician for the American Communist Party (CPUSA). He and his wife remained unregenerate supporters of Stalin all their lives. Bettina drank her parents’ Kool-Aid undiluted, and was a member in good standing of the CPUSA when she joined Savio’s team. That was a watershed moment for the New Left, which had previously viewed Communists as betrayers of the progressive cause.

Freedom of speech was of course anathema to the CPUSA, where dogmas were downloaded by elites into the brains of an unquestioning rank and file. With Bettina’s support, the protests resulted in an end to the requirement that university forums on controversial issues include more than one side of the argument.

Bettina’s forceful public personality soon made her a national figure. But she herself understood the incoherence behind her iconic status, writing in a memoir: “It was a terrible irony that while I was heralded as a leader of Berkeley’s Free Speech movement, I simultaneously justified the suppression of freedom of speech and freedom of the press in the Soviet Union, East Germany, Hungary and elsewhere.”

She drifted into academia as a career outlet for her rapidly evolving feminist views, at first only as a sidebar to her more important job as chair of the CPUSA in Santa Cruz county — a radicalized, lesbian-dense area rife with feminist activism, and a natural home for Bettina. The resident expert on Marxism amongst her feminist peers, Bettina stated her intellectual purpose was “to tease the juxtaposition of Marxism and feminism into a unified theory of liberation.” She introduced the triad of “intersectionality” — race, class, gender — that remains the ideological formula for Gender Studies programs everywhere.

In 1979, when she was 37, Aptheker’s focus on the patriarchy rather than capitalism as the more pernicious source of women’s victimhood earned her a comical (to me, anyway) letter from the CPUSA’s “National Commission on Women,” reprimanding her for “basic differences with the Party, and, I should add, with Marxist-Leninist theory on the source and nature of women’s oppression under capitalism.” This threw her into self-described “complete turmoil” — in itself rather comical, for why should she have believed she would be exempt from the kind of censure for party-line deviation she had cheerfully supported against others all her life?

In any case, now that it was personal, she became disillusioned and left the CPUSA. (Herbert Aptheker was apoplectic: “The Soviet comrades will never understand it. Never!”) But even though she’s no longer officially a communist, Aptheker recently had this to say in the Berkeley alumni magazine about the anniversary: “The wisdom of a true freedom is inexorably tied to who exercises power and for what ends.” You can take the girl out of the Party, but you can’t take the Party out of the girl.

Can we talk? as the late comedian Joan Rivers might have said about Bettina Aptheker and her ilk. The Free Speech Movement was never really about free speech. That was just a front. The real movement was to colonize the campus with authority figures who hated “Amerika.” The universities were never considered anything but infrastructure to support the left’s assembly-line indoctrination of the masses. Political progress necessitated free-speech regression.

Who in 1964 would have predicted the need for campus “free-speech walls” 50 years on? The answer is blowin’ in the Berkeley wind.