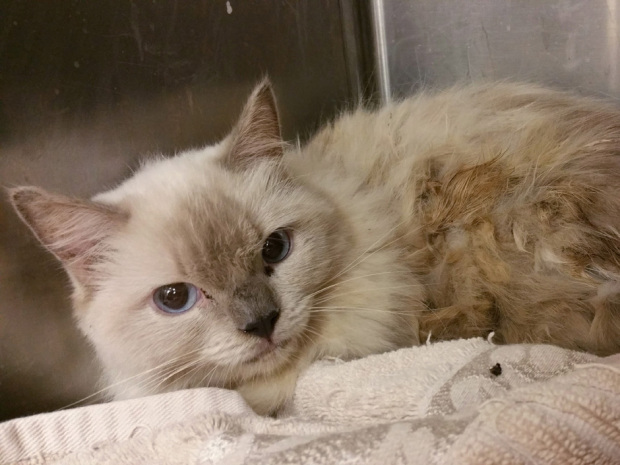 Hallowe’en is always a gold mine for cute pics of kids in unusual costumes appearing on social media. One I especially liked this year — I simply had to “share” it — was a little girl in slippers with her hair in giant curlers, and attached to her bathrobe from shoulders to hem a passle of kitten stuffies. A sign around her neck announced her as “cat lady.”

It’s funny as a costume, but in real life, the “addiction” of animal hoarding, as some researchers call it, is no joke for its animal victims. A few weeks ago in Montreal, Barbara Lisbona, founder (in 1997) of the Animal Rescue Network, made headlines in the Montreal Gazette and elsewhere when her cat rescue operation was exposed as a reeking horror show after the landlord of her current Montreal shelter, frustrated at being denied access following months of unpaid rent, finally went in. The stench from the 40 cats in the main room — many diseased, a few dead — was said to be overpowering. Other reported Lisbona-centred stories feature similarly sickening abuses on a cumulatively grand scale.

The reporting of Lisbona suggests many of the earmarks of a type familiar to those who study the rescuer-hoarder syndrome. American researchers social worker Jane Nathanson and veterinary medicine specialist Gary Patronek say that rescuer-hoarders “create an exclusive domain with animals within which they strive to fulfill their own needs to feel highly valued, loved, and secure.” Many report trauma in their early childhood or poor bonding with their primary caregivers. They respond as adults with excessive caregiving tendencies toward needy animals, who are, after all, always in abundant supply.

The rescuer-hoarders experience what Nathanson and Petronek call “a caregiver’s high” and the sense of being a saviour. If you ask rescuer-hoarders why they do it, they will say they are motivated by love, even when they allow their captives to starve or sink into profound distress. They see animals as extensions of themselves, but they fail to comprehend that animals have needs that are distinct from their own. They will usually deny they have a problem, and even – apart from cash — rebuff offers of help, as they prefer overseeing mayhem to ceding control.

Hoarder stories evoke pity and revulsion in equal measure. In 1999 Florida resident Terry Ruppel, 70, bereft and broke after selling his truck to pay for his wife’s funeral, retreated into his home, and “turned to his [37] cats to soothe the loneliness that settled upon him. He let them climb in his bed so they could purr him to sleep. They crawled over him as he sat, hour after hour, in front of his television. He was too tired to clean up after them.” Oh dear. Ugh.

Cat ladies constitute the most familiar genre of animal hoarders, but there are dog hoarders, horse hoarders and even pig hoarders, according to Merritt Clifton, humane-movement historian and publisher of Animals 24-7.org. In a 1999 article, “Animals in Bondage: the hoarding mind,” Clifton reported on findings culled from 688 U.S. hoarding cases. He found that females were responsible in 59 per cent of the cases and males in 41 per cent, while 15 per cent were associated with both. Unsurprisingly, nearly two-thirds of the perpetrators lived alone. Of the hoarders who were also rescuers, 77 per cent were female. In 117 cases (17 per cent), the hoarders kept dead animals.

Creepily, even though they represent a small proportion, in 28 of the cases, including a third of all the women under review below age 40, a total of 44 children were kept in approximately the same conditions as the animals in their care — starved, caged, filthy, and suffering untreated injuries or maladies.

You don’t have to own animals (although I do have both a dog and a cat) to be disgusted by animal-hoarding stories, but what’s almost as dispiriting as the animal suffering involved is the degree of enabling that accompanies them. According to Clifton, friends and even whole communities often ignore tell-tale signs of odours and bizarre behaviour before reporting hoarders, and even when they are exposed, there are few consequences to the perpetrators.

Of the 688 cases Clifton studied, only 28 per cent resulted in any convictions, and both fines and jail sentences were ludicrously low — fines averaged $272 and sentences averaged to 25 hours of community service plus 242 days on probation. Actual jail sentences were usually suspended. Clifton found 12 farmers who had starved whole herds of animals but, on average, were fined no more than $546 and served an average of 40 days in jail.

Neither jail nor fines are the solution for these disordered people. Hoarders must be forbidden to own more than two animals, a proscription to be backed up by regular inspection and immediate confiscation of stealth additions. A cure is likely impossible, so for helpless animals, prevention is necessary when pathological altruism lays down the paving stones to hell.