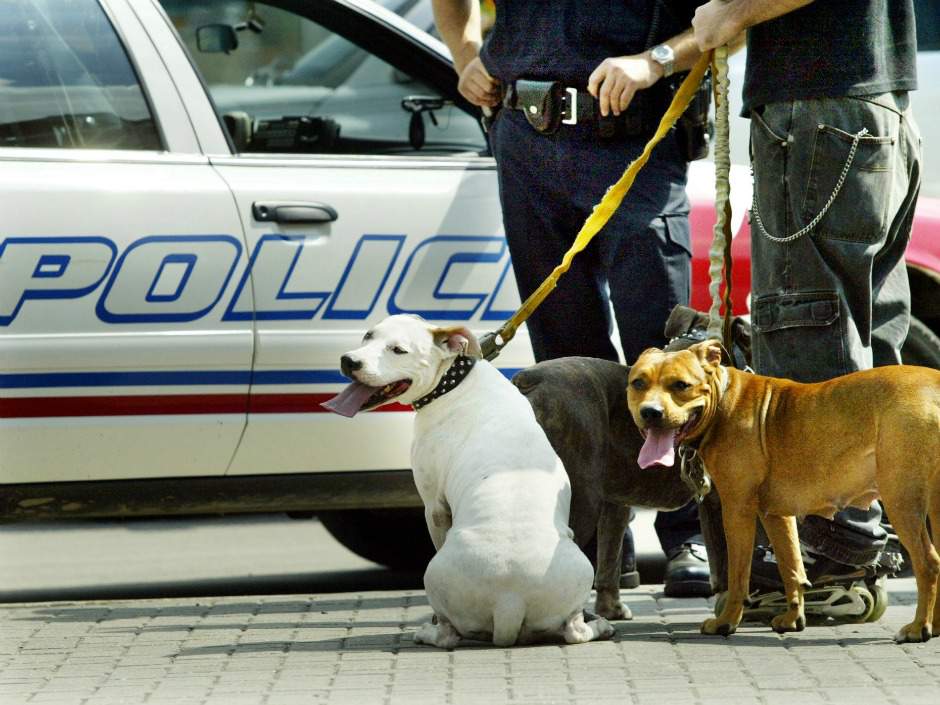 A man holds three pitbulls as he speaks with police. A 55-year-old Montreal woman is dead after apparently being attacked by a neighbour’s pit bull.

Thursday the Montreal Gazette commissioned two responses to the fatal attack of a pit bull on a Montreal woman, which happened to occur just as the city is weighing the potential benefits of a pit bull ban: mine, which was pro-ban, and another, by Paul Labonté, which was anti-ban. Neither of us had seen the other’s piece when we wrote our own. Now that I have read Labonté’s, I can see that more than one alleged fact in it cries out for rebuttal.

Most egregiously, in defending pit bulls, Labonté describes the breed as “bold, fearless, agile, loyal and totally reliable.” Totally reliable? Alas, the only thing that is reliable about a pit bull is that once focused on its prey, the dog will be relentless in attack. The epidemiology on pit bull attacks – a pit bull kills a human being in the U.S. about once every 17 days and is six times more likely to kill humans than all other breeds of dogs combined – demonstrates its unreliability.

Indeed, most pit bull attacks are entirely unprovoked, and about half of the children killed by them are the victims of pit bulls raised with love in their own households. Reliable? Only for dog fighters, who need a dog they can count on to fight to the death.

To illustrate their alleged reliability, Labonté adduces the thoroughly discredited myth of Staffordshire bull terriers (genetically identical to pit bulls in terms of the impulsive aggression that is built-in by their breeding) as having served as “nanny dogs” to children.

The “nanny dog” trope has long been a staple of the pit bull advocacy movement, but even the most passionate of them has quietly dropped the boast from their sites, as no amount of honest research can find a shred of evidence for the claim. On the contrary, the “nanny dog” myth can be directly traced to a breeder of Staffordshire dogs who was eager to launder their deserved reputation as high-risk dogs. You can read the whole story of how she fabricated the claim out of whole cloth here.

A 55-year-old Montreal woman is dead after apparently being attacked by a neighbour’s dog.

Police responding to a 911 call at about 5 p.m. Wednesday found the woman’s body in the backyard of her home in the east-end district of Pointe-aux-Trembles.

Police said the dog, which appeared to be a pit bull, was standing by the body and acting aggressively. It was shot and killed by officers to allow paramedics to approach the woman, who was pronounced dead at the scene.

Labonté admonishes us against a likely “rush to judgment about pit bulls.” There has been no such “rush.” Judgment about pit bulls has been building up for the past 30 years, as it has been clear that the rising numbers in the pit bull population – there are now millions where there used to be thousands – are symbiotically linked with the escalating rates of human and animal carnage.

Humane-movement historian and publisher of animals24-7.org Merritt Clifton, for example, has been amassing data on all damages wrought by all breeds of dogs since 1982, and puts out annual reports that include data on “maulings, maimings, dismemberments and fatalities” according to breed, along with his methodology for data collection, which is similar to the methods used by the Centers for Disease Control and other national agencies. The statistics are irrefutable. No hypothesis about “bad owners” or “misunderstood breed” can possibly stand up to the challenge of these numbers.

“Of the 5,770 dogs involved in fatal and disfiguring attacks on humans occurring in the U.S. & Canada since September 1982, when I began logging the data, 4,043 (70%) were pit bulls; 4,874 (86%) were of related molosser breeds, including pit bulls, Rottweilers, mastiffs, bull mastiffs, boxers, and their mixes. Of the 602 human fatalities, 326 were killed by pit bulls; 91 were killed by Rottweilers; 461 (75%) were killed by molosser breeds. Of the 3,532 people who were disfigured, 2,571 (73%) were disfigured by pit bulls; 3,050 (87%) were disfigured by molosser breeds. Pit bulls–exclusive of their use in dogfighting–also inflict more than 70 times as many fatal and disfiguring injuries on other pets and livestock as on humans, a pattern unique to the pit bull class. Surveys of dogs offered for sale or adoption indicate that pit bulls and pit mixes are together less than 7% of the U.S. dog population; molosser breeds, all combined, are 9%.”

There is no rush to judgment there. What there is is scientifically accumulated data that tells us the pit bull is an inherently high-risk dog.

There are presently pit bull bans in 700 U.S. jurisdictions, and several throughout Canada, including Ontario since 2005. And even though many of these bans (including Ontario’s) are routinely flouted and not rigourously enforced, they prevent deaths – Denver, for example, has had a pit bull ban in place for decades and has since the ban never had a dogbite-related fatality – and manage dramatically to reduce the most severe damages.[5]

Not all pit bulls will bite, but when they do, it will require more than a bandage to heal, as most other dog bites do. Only pit bull bites often require facial reconstruction surgery, something to ponder.

It isn’t the frequency of bites that is the issue (are you listening, Mayor Denis Coderre, as you seem not to understand that?), it is the severity. And when it comes to severity, the pit bull reigns supreme. If you can only love a pit bull, you don’t really love dogs. If you think public safety is more important than pit bull owners’ hurt feelings, support a ban.