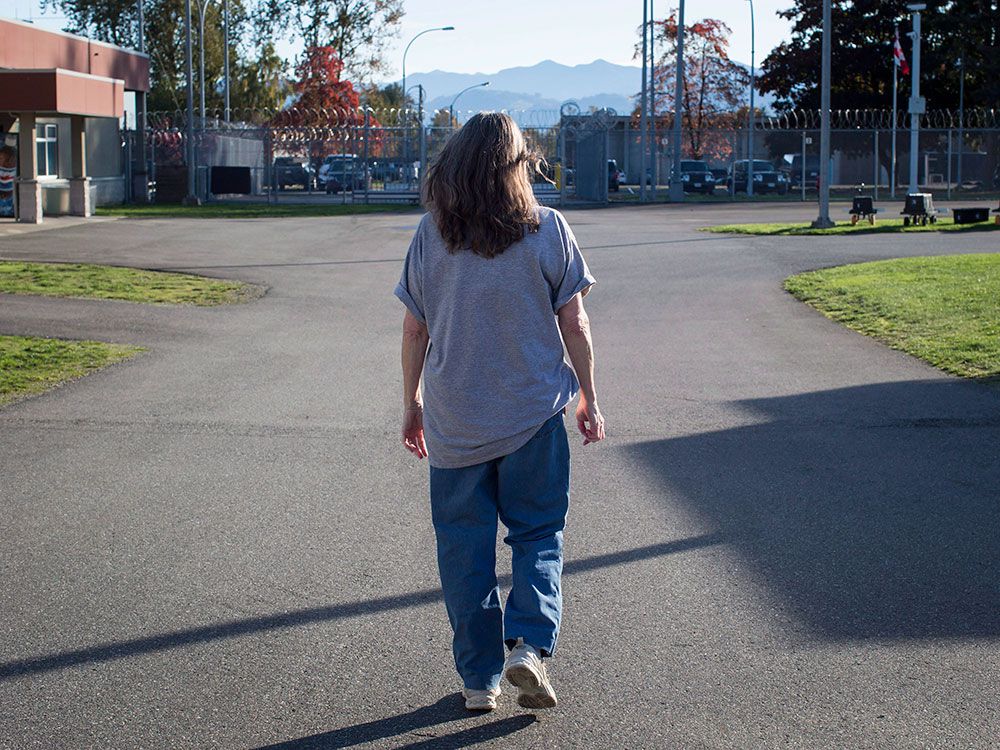 About 75 women recently assembled at the Fraser Valley Institution for Women in Abbotsford, B.C., seen here in a file photo, to protest a policy that allows biologically male prison inmates to request transfers to women’s prisons. Photo by Darryl Dyck/The Canadian Press

Female prisoners protest placement of sex offenders in their midst

Nobody in Canada cares more about women’s interests than Justin Trudeau. Just ask him. Especially when he’s on the campaign trail (“feminist budget,” “she-cession,” “she-covery”). His personal record of, ahem, he-haviour with certain actual women is another story, but never mind all that. It’s election time. The women’s vote is crucial. Unleash the ministerial sheepdogs to herd all those grazing Canadian ewes, away from the Conservative wolves, and into the safety of the Liberal corral.

Maryam Monsef, minister for women and gender equality — presently under fire for referring to the Taliban as “our brothers” — obligingly plunged early, fiercely and baselessly into demonizing Conservative Party Leader Erin O’Toole on the abortion file. A “woman’s right to choose” was under threat, she assured Canadians on Twitter. Women’s rights “ARE up for debate,” she tweeted ominously. In fact, O’Toole is solidly pro-choice, nobody doubts it, and Monsef’s ploy was treated with the ridicule it deserved (although not a patch on the mockery she is receiving for her “our brothers” remark.)

Barbara Kay: Trudeau the fake feminist ignores female inmates' concerns Back to video Notice something, though? It’s suddenly women, women, women. Not cis-women. Just women. And it’s “women’s rights, women’s choices” not “menstruators’ rights” or “uterus havers’ choice’s.” That’s because in elections, ideological activists have little clout beside ordinary Canadians, the overwhelming majority of whom think such terminology is insulting to, you know, women.

Last March, though, with no election in sight, Monsef presented a less women-centric face to the public. She sponsored a (remote) conference to mark International Women’s Day (IWD) 2021, titled Canada’s Feminist Response and Recovery Summit. IWD is traditionally a forum to discuss issues that affect women around the world — and by “women” I mean, as the dictionary defines them, actual “adult human females” — such as prenatal support, child care, pregnancy risks like eclampsia (widespread in some developing countries), access to education, forced marriage, female genital mutilation and so forth.

During this conference, though, according to participants who provided me with transcripts, controversy arose in the chat function over the word “female.” Several participants were ejected from two different sessions for trying to raise female-only issues on the grounds that such discussion was exclusionary to transwomen. One participant, an immigrant not entirely fluent in English, was chastised for even asking what the definition of “woman” was for the purposes of the conference (no definition was ever provided).

Participants who insisted that IWD was about “females” were piled on as transphobic. Organizers supported the critics in an email sent to participants which stated: “Unfortunately and unacceptably, some attendees made the choice to post disrespectful, transphobic and homophobic comments. We are appalled and disappointed by these posts and deeply regret that this incident occurred.” Trust me, the remarks were not disrespectful at all — quite the opposite. It was the responses to them that were disrespectful. My sources declared themselves to be quite shaken by the hostility shown to them, the more so given its endorsement at official levels. A polite letter to the conference organizers requesting clarification on the word “female” received no response.

More On This Topic Barbara Kay: The complicated truth about transwomen in women’s prisons Sabrina Maddeaux: Annamie Paul is absolutely correct. Justin Trudeau is a fake feminist One might legitimately argue that Monsef’s personal role in this sidebar to the conference as a whole was so indirect as to be exculpatory. Even so, I would argue, the decision to expel the “essentialist” women, who believe sex is binary, conferring existential differences between males and females, in order to appease the trans activists, speaks to a learned instinct throughout the chain of command from the minister’s office on down: when you encounter conflict of this kind, resolve it at the women’s expense.

For a more off-putting example that speaks directly to this government’s irresponsibility regarding women’s rights, we have the following story — apparently not considered newsworthy enough by the CBC — reported by True North’s Lindsay Shepherd. It springs directly from 2017 rules established by the Trudeau government, decreeing that a self-identity gender claim alone — no reassignment surgery necessary as was previously required — would be sufficient for biologically male prison inmates to request transfer to a women’s prison.

Two weeks ago, about 75 women assembled at the Fraser Valley Institution for Women (FVI) in Abbotsford, B.C., to protest the policy. According to former inmate and prisoners’ rights advocate Heather Mason, representing Canadian Women’s Sex-Based Rights, of the 92 inmates housed at FVI, five are males who claim to identify as women. A former Correctional Service of Canada deputy commissioner for women told Mason in 2019 that 50 per cent of the males who request to be transferred to a female prison are sex offenders.

It speaks to a learned instinct throughout the chain of command

Shepherd writes: “One such male inmate is 39-year old Tara Desousa (Adam Laboucan), who is incarcerated for raping a three-month old infant boy. The baby boy required serious reconstructive surgery, and now Desousa resides at a prison that runs a mother-child program.” Not a “birthing-person-child program.” A mother-child program. Consider the psychological effect on those mothers of that monster’s presence among them. Their anguish is on Justin Trudeau.

I interviewed Erin O’Toole during his leadership campaign. I asked him for his views on the collision of gender and sex-based rights in areas like prison, sports and intimate spaces like rape crisis centres. He wrote to me, “I stand up for all rights and will never play the game the left does to suggest that recent analogous-grounds rights somehow trump traditional rights.”

This elegant phrasing suggests he believes “traditional” — i.e. sex-based — rights should trump “analogous” — i.e. gender-expression — rights. Well, good, but this is obfuscatory language where there is no need for it. The overwhelming majority of Canadians across the political spectrum agree that gender-expression rights should not be absolute, and that exemptions from the value of “inclusion” are necessary when they are trumped by the more fundamental principle of protection for women in biology-based domains.

Mr. O’Toole was commendably forthright in his condemnation of Maryam Monsef for her allusion to the Taliban as “our brothers.” Will he be equally forthright in condemning Justin Trudeau for insisting that women in prison affirm sex offenders as “our sisters?”