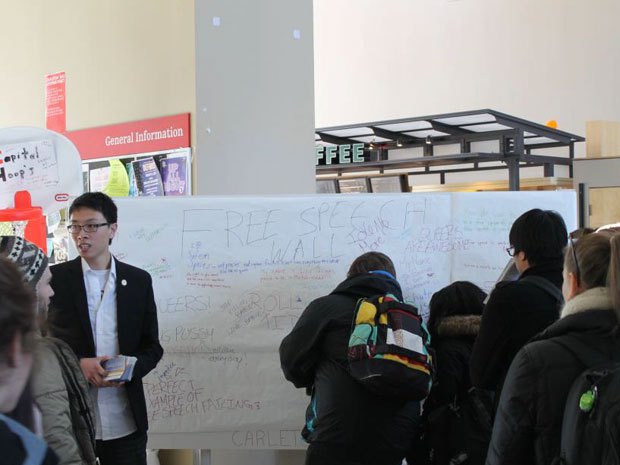 Only hours after students installed a “Free Speech Wall” at Carleton University to prove that campus free speech was alive and well, it was torn down by an activist who claimed the wall was an “act of violence,” against the gay community.

This column was drawn from opening remarks presented at a March 27 Macdonald-Laurier Institute debate in Ottawa, on the resolution: “Free speech in Canadian Universities is an endangered species.”

In the past year, a wave of moral panic has swept universities over an alleged campus “rape culture,” which former governor-general Michaëlle Jean went so far as to label a “disease.” Whenever I express skepticism of rape culture’s existence in columns, my Twitter feed lights up with abuse. I have noticed that the most retweeted invectives aren’t the ones merely telling me I’m wrong; rather it’s the tweets declaring, “@BarbaraRKay should be fired.”

Where are these young polemicists — they are all young — taught that the proper response to dissenters is professional death? Why, at the universities, of course where it is common Marxism-derived practice to suppress “offensive” discourse through speech codes, forced sensitivity training or worse. Brave is the university student today who would deny rape culture in any campus forum.

Students are at least free to speak their minds once they leave the universities. But pity the rare faculty member at odds with the leftist echo chamber he is condemned to inhabit for decades. Faculty and administration can be very tough on their own. The epidemic “mobbing” of academics beating against the culture’s near-monolithic current, at its peak in the 1980s and 90s, remains a shameful, ongoing chapter in our campus histories.

Google the names of Lucinda Vandervort, Heinz Klatt, Irwin Silverman, Martin Yaqzan (an anti-rape culturist avant la lettre), Alan Surovell and Kenneth Westhues, a very partial list of academics savaged by their peers and/or administrations for politically incorrect speech, or following unfounded allegations of sexism, racism or homophobia. You hear about fewer such cases now, but only because most academics got the message, and now prudently self-censor to avoid similar bouts of “re-education.”

Still, the recent mobbing of now-retired University of Calgary academic Tom Flanagan by his peers and the liberal media, the academy’s branch office, for voicing a reasonable doubt as to the efficacy of prison for pederastic voyeurs demonstrates that lust for the blood of politically wayward peers still burns fiercely in academia.

Nevertheless, free speech isn’t entirely extinct on Canadian campuses. After all, it positively flourishes for those who hold politically correct views. For anti-capitalists, anti-Zionists and members of official identity victim groups — women, gays, natives, people of colour, any religion other than Christian — speech is as free as the birds, even if it offends conservatives, Zionists, heterosexual white men or Christians.

So free speech for the “righteous,” but:

— Pro-life demonstrators have trouble getting official status for their clubs, their demonstrations are routinely disallowed, and some have even been arrested for “trespassing” on their own campuses.

— At Ryerson University in Toronto, when a men’s awareness group applied to the Student’s Union for official status, the Student’s Union quietly amended their charter to specifically exclude any men’s issues group that did not make women’s voices central, therefore denying them speech; vandalism and disruption have attended several men’s issues campus events.

— Israel Apartheid Week is free to peddle its hateful canards every year on campuses across Canada, but when a McGill pro-Zionist club called a members’ soirée, “Israel: a Party,” a gently ironic reference to the absurdity of the word “apartheid” as applied to Israel, the Student Union threatened to take away their club status unless they changed the name.

Too-onerous security fees are imposed, an indirect but blatant attack on free speech

— Faculty, administration and student unions collude in monitoring and policing what can be said and what can’t by guest speakers. Speakers with conservative or pro-American/Israel views have received veiled threats from university presidents concerning our hate-speech laws, encouraging hostile disruptions, buildings forcibly occupied and access to speeches denied. Or too-onerous security fees are imposed, an indirect but blatant attack on free speech.

For a plethora of other examples, one has only to peruse the 2011, 2012 and 2013 Campus Freedom Index reports compiled by the Justice Centre for Constitutional Freedom, which monitors the state of free speech at 45 public universities, tracking the often enormous gulf between benign official policies and Orwellian practices.

One of the most egregious offences against freedom of speech cited in the 2013 report was the shutting down of a free-speech wall built by Students for Liberty at Queen’s University to raise awareness of free expression rights. The grounds cited for its removal were “offensive content,” but no specifics were offered. Notably, no policy or bylaw had been violated.

“Free speech wall.” Ominous words. Such walls emerged in authoritarian societies such as China, where citizens quite reasonably fear speaking truth to power in a non-anonymous context. That there is an entire generation of Canadian students who think a free speech wall for anonymously written incorrect thoughts is something normal, acceptable and necessary in a democratic society — well, this saddens me, and scares me a little too. Campus rape culture is a social construction. “Unfree speech culture” is the real campus disease.