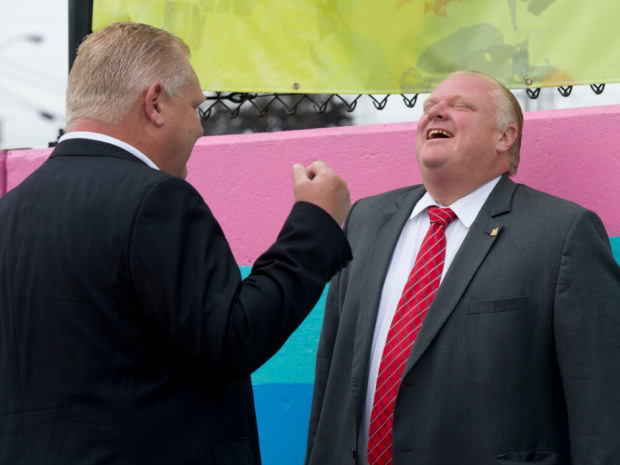 Whenever you think it can’t get more surreal, it always does.

Up until the recent revelations that Rob Ford was battling a life-threatening illness, many of us outside Toronto considered that city’s mayor, along with his pugnacious brother Doug, at least good for a laugh. Here in Montreal, mayoral links to corruption are a dime a dozen. But rarely do our mayors, many duller than dishwater personally (the present mayor Denis Coderre a nice change, being both lively and apparently incorruptible), provide riveting roller-coaster ride of the kind Toronto has been experiencing this year.

Whenever you think it can’t get more surreal, it always does. Even after Rob Ford was forced to drop out of the mayoral race to receive chemotherapy for an aggressive form of cancer, Doug stepped in right away to make sure the show went on. In Monday’s news, we learned that on top of all their other … foibles, the Fords may also harbour anti-Semitic leanings. At a north-end Jewish school debate among mayoralty candidates John Tory, Olivia Chow, Doug Ford and fringe candidate Ari Goldkind, the latter accused Rob Ford, present in the audience, of having uttered the “k” word on an audio recording, insinuating that brother Doug Ford was similarly tainted. Doug did not help matters by defensively blustering  “My Jewish doctor — my Jewish lawyer” as proof of his innocence.

Oh lordie. That comment simply compels me to recount this old, but oh-so-relevant Jewish joke:

A recently hired young rabbi is conducting a funeral service. Explaining that he is so new to his post that he did not actually know the departed member, he asks that someone from the congregation step forward to provide a eulogy. Nobody moves. The rabbi pleads for someone to say something positive about the deceased, however briefly. No response. Exasperated, the rabbi says he will not continue the service until somebody says something nice about the dead man. Silence. Finally a little old man shuffles slowly up to the podium, sighs, and announces, “His brother was worse.”

Interpreting the word “brother” loosely as “other mayors,” Torontonians can take comfort from the long list of American mayors who make Rob look — well, not exactly respectable, but also not a complete outlier either. There’s mayor Kwame Kilpatrick of Detroit, who was sentenced to 28 years in prison last year for a litany of crimes executed during his mandate. And everyone recalls Marion Barry, Washington’s crack-smoking mayor, arrested in a hotel room in 1990 during a sting operation. But he still got elected to a fourth term. Even when he was stripped of authority for financial mismanagement, he never stepped down, and still serves on city council today. (He’s been asked many times to comment on his crack-smoking Toronto “alter ego,” but always refuses.)

Cianci smokes, he battles obesity, and in a particularly grim parallel, he’s also recently battled cancer. He’s brash, insensitive and a champion of the blue-collar class. Highly energetic, he encourages a cult of personality. He’s popular, but he has a dark side. In 1966, then a law student, he was accused of raping a woman at gunpoint. In 1983, then mayor, he assaulted a man he thought was carrying on with his wife. Well, that’s human. But having a cop hold the guy down while Cianci burned him with a cigarette and hit him with a fireplace log? Not so much.

Forced to resign — although he only got a suspended sentence — he was re-elected in 1990 (clever slogan: “He Never Stopped Caring About Providence”). Then in 2002 Cianci was brought low yet again by an FBI investigation into serious municipal corruption. Another resignation, and this time he actually went to prison for four and a half years. Bouncing back in 2007, he began hosting a daily radio show, wrote a book (Politics and Pasta) and began marketing his own marinara sauce, ostensibly a charitable venture, although according to an Associated Press report, “in recent years, no money from the sauce’s sales has been donated to Cianci’s charity scholarship fund.”

His “non-elite” supporters love him because “he gets things done.” The latte crowd abhors him. Sound familiar? Polls give him the edge over his “good guy” opponent. Are you laughing yet?