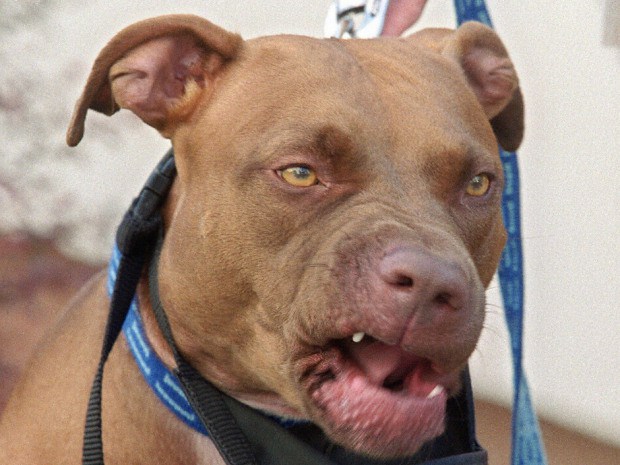 Barbara Kay: What pit bull activism says about our culture

This breed of dog is six times more likely to kill humans than all other breeds ... combined.

Last weekend in Saanich, B.C., a 16-day old baby was mauled by her family’s pit bull-Rottweiler mix on the same day as an elderly man was attacked by two pit bull dogs outside a Langley, B.C. dollar store. News like this is reported, but commentary-wise, dog-related public safety is virtually an orphan topic. Which is why I adopted it.

Public-safety regulation is usually linked to what is deemed a critical number of injuries or deaths. Between 1971 and 1980, for example, Ford produced three million Pintos. Due to a peculiarity in the Pinto’s structural design, its fuel tank was prone to puncture in rear-end collisions. Consequently, over Pinto’s 10 years in operation, 26 people died in fires that a better design could have prevented. Ford was forced to retire the model in the interest of public safety.

By coincidence, there are about three million pit bull type dogs in North America today, representing 6% of all breeds. But about 26 people die from pit bull type dogs in the U.S. every year (out of about 40 from all 400 breeds combined). Pit bull type dogs maul, maim, disfigure or dismember hundreds more. By no coincidence, when pit bulls were few in number — 200,00 before 1970, most clustered in marginal districts — dogbite-related fatalities in the general population were freakishly rare. In my youth, when middle-class neighbourhood dogs ran loose, and average families didn’t own fighting dogs, years went by without a single fatality. If pit bull type dogs were cars, they’d be long gone. But unlike car victims, pit bull tragedies don’t arouse public outrage.

They certainly outrage me. But in truth my engagement with the issue is mostly driven by what pit bull activism says about our culture.

Pit bulls are now the second most popular breed of dog in America (Labs happily still rule). Criminals favour them, certainly; but most now belong to naive mainstream people who believe pit bulls’ association with thuggery has given them an undeserved “bad rap.”

In reality, pit bull type dogs stubbornly remain what they have always been: fighting machines bred for impulsivity, pertinacity in attack and — thanks to their peculiar “rending” style of bite — a capacity for inflicting extraordinary damage on victims, usually other animals (pit bulls are responsible for almost 100% of domestic-animal fatalities, including cows and horses), but frequently enough, people, disproportionately children.

Given the statistics — pit bull type dogs are six times more likely to kill humans than all other breeds combined — and nothing extraordinary to distinguish them positively from other breeds, their rapid proliferation is irrational. Unless what we are witnessing is a mass projection of current social theories about people onto dogs, the animals in which people are most apt to invest their feelings and social values. Canine history supports that hypothesis.

Until the mid-19th century, dog breeding was a casual affair. But then the fundamental reality of Empire — continuous connection between British elites and “inferior” races — nurtured a corresponding revulsion from canine mongrels. Dogs, it was felt, should reflect one’s class status. Herding dogs met farmers’ needs. The hunting nobility wanted retrieving dogs: hence the incomparable Labrador Retriever, bred by and for aristocrats. And pit bulls were invented to serve lowlifes for whom pain and bloodletting were “sport.”

Moving on in history: The humane movement had long been underway, with a focus on putting an end to animal abuse, when the politically convulsive 1970s shattered social and political consensus, producing a new culturally driven paradigm for human-canine relations. Just as imperial Britain’s obsession with caste translated into a fetish with breeding lines, the counter-culture in America, dominated by tropes of moral and cultural relativism, liberation, anti-racism and civil rights, anthropomorphized dogs into victims for whom merely humane treatment was not good enough.

Now, applying rubrics designed for humans, no dog breed may be considered better than any other, and even fighting dogs — though in fact line bred for stereotypical high prey drive — must be accorded the same individual rights as the law guarantees us “mongrels” (since humans mate randomly, it’s what we are in canine terms). Out of this misguided cross-species projection, and because pit bulls are the dog of choice for young black men of the underclass, the pit bull achieved totemic victim status — perceived as negatively stigmatized by the media as their racialized owners often are by law enforcement.

The novel and most disturbing aspect of this issue is the army of advocates who literally devote their lives (and some their considerable fortunes) to laundering the pit bull’s image. This is the first time in the history of human-animal relations that a movement has formed, not to promote the well-known virtues of a beloved breed, but to promote denial of a beloved breed’s well-known vices. Alas, the movement produces extraordinarily effective “Big Lie” propaganda.

These fanatic activists are far more numerous and well-organized than the small corps of ban proponents I support. Bans on fighting dogs have eliminated dogbite-related fatalities in many jurisdictions, but thanks to the pit bull advocacy movement’s relentlessly-bruited mantras (“blame bad owners,” “all in how you raise ‘em”), some of those bans have been repealed on “discrimination” grounds.

High I.Q., as history constantly reminds us, is no guarantor of common sense or civic-mindedness. The pit bull advocacy movement is vigorously championed by a number of “progressive” intellectuals, academics and journalists. John Homans, former editor of New York magazine, now with Politico, parrots pit bull advocacy bromides in his otherwise well-researched book, What’s a Dog For? Cultural gadfly Malcolm Gladwell aligns discrimination against pit bulls with the racialization of African-Americans in his book, What the Dog Saw. Journalist Tom Junod romanticizes pit bulls in Esquire Online, also adducing the disingenuous race card: “The opposition to pit bulls might not be racist. It does, however, employ racist thinking.” (This is pure anthropomorphism; such logic would make it “racist thinking” to prefer huskies over collies as sled dogs.)

These writers easily find politically correct dog industry “experts” to support their preferred theory that pit bulls raised responsibly are no riskier or more physically damaging than other breeds. I prefer the honesty of dog fighters who laugh at such wishful thinking, pit bull breeders who candidly advise owners to carry a “break stick” with them to pry open jaws, and the statements of disinterested surgeons testifying to the appalling, pit-bull specific butchery they must contend with.

Dogs with a talent for fighting generally like to fight

In the surreal world of pit bull advocacy, ethical bright lines tend to blur. Canadian author and blogger Douglas Anthony Cooper is taking pit bull activism to a grotesque new level of hutzpah, having written a book, Galunker, (originally scheduled for release this month, but delayed) about a winsome shelter pit bull, which actually peddles pit bulls to preschoolers.

Promotional material characterizes Galunker as “a children’s book to change our perception of pit bulls.” Rescued from a dogfighting operation, Galunker’s story is told in Dr. Seuss-style rhyme (“But unloved he was, and he always had been/For Galunker, though never his fault, looked real mean.”) Emotive illustrations and text combine to portray Galunker as “about as dangerous as a marshmallow.” Amongst others, this affirmation is breathtakingly false. Pit bulls that have been “rolled” — initiated into combat, like Galunker — are at particularly high risk for future violence.

Dogs are living creatures, but they are also consumer products. The utopian belief system illuminated in Galunker, which privileges the invented “right” of all dogs, whatever their baggage, to a new home over children’s right to safety is wicked, and no different, ethically speaking, than if Ford had refused to recall Pintos on the grounds that it is racialized thinking to discriminate amongst brands of cars.

Real critical thinking uncovers the truth transcending the nonsense the advocacy mill grinds out, however obscured by charming illustrations and rhyming verses: Dogs with a talent for fighting generally like to fight. When what they deem the right occasion presents itself, they will, with the same joy as greyhounds run and bloodhounds track, display the inherited motor pattern that gives them pleasure in performance.

The consequence of pit bull advocacy’s willed denialism of this genetic reality can be measured, first in the capitulation of municipal and provincial governments to activist intimidation, and then in the blood that flows in a steadily widening pool from the growing mass of innocent animals and people who weekly, daily, hourly fall victim to the canine killers in our midst.