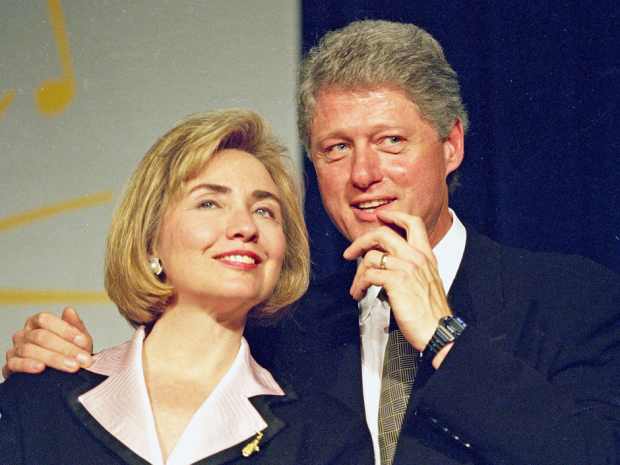 Hillary and Bill Clinton in 1994 when he was president.

Hillary Clinton and Donald Trump are both rotten candidates for the U.S. presidency, but they do provide great fodder for comedians. For example, the following joke arrived in my Inbox this morning:

Trump and Hillary meet at a bar. Donald leans in and smiles, “The media are really tearing you apart for That Scandal.” Hillary answers, “You mean my lying about Benghazi?” “No, Trump says, “the other one.” Hillary says, “You mean using my private server for classified material and then lying about it to the FBI?” “No,” Donald, says, “the other one.” And so it goes, on and on, a veritable Hillary’s Hall of Shame, and every indictment taken directly from Hillary’s documented history. Finally, stumped after an entire litany of dishonorable moments fails to nail the “other one,” Hillary says,  “I give up…Oh wait, I think I’ve got it ! When I stole the White House furniture, silverware and china when Bill left office?” Trump says, “That’s it!”

If Clinton wins the White House, will she return the silverware?

The joke reminded me: I had forgotten about the silverware and the china. Strangely, even though Hillary’s other political crimes hold far more significance in terms of their impact on people’s lives and the national interest, it is, with regard to character, this petty act of thievery I find the most repulsive. One has to harbour a profound sense of entitlement to feel that the accessories to a transient sojourn in the people’s presidential residence are yours to keep in private life. And I’ll say something else about this kleptocratic impulse that will doubtless bring me social-media grief: It is the sort of thing only a woman would think of doing. Amiright?

Which brings me to the debate on whether or it matters that Hillary would be the first woman president of the U.S. There is no middle ground here. Either you think Hillary’s ascension would represent a momentous shattering of a glass ceiling it is high time was shattered, or you think what would have been a big deal in 1990 is a big yawn today.

I’m in the latter camp. It would be a first in the U.S., to be sure, but so what? Never mind Thatcher and Golda Meir; there have been women prime ministers in India and Pakistan. And what good did that do the women of India and Pakistan? None, as far as I can tell, any more than Obama being the first black president did anything to heal the racial divide (and arguably contributed to its worsening).

There is one argument that appeals to many progressive types especially – the “people like ourselves” one. In her Aug 3 column, “An Important Moment for Women,” Jen Gerson positions herself squarely in the camp that sees great value in the symbolism Hillary would bring to the presidency, for “if we don’t see people like ourselves in positions of power, it becomes difficult to imagine how we might go about achieving it for ourselves.” This is a puzzling notion to me. I don’t care if there is never a Jewish president (and I doubt there will be, because whatever his or her Israel policy was, half the Jews would hound him unmercifully and drive him or her crazy). But so what? Jews have succeeded admirably in so many walks of life, no Jewish kid is without role models for high achievement.

Why does a “position of power” have to mean the presidency, a position that 99.999999% of all people can never hope to aspire to? That’s like saying it isn’t good enough for a Sikh man to to be Minister of Defence; if a Sikh hasn’t flown to the moon as an astronaut, then Sikhs won’t believe they can succeed in the military. There is only one president, but there are many positions in politics that are nearly as high and that have already been filled by competent women, who have had to clear far more hurdles than Hillary.

Strangely, women who have gone far in political life do not get much credit when they espouse politically incorrect ideologies. Condoleeza Rice was the Secretary of State many moons ago, the second most important job in government, and nobody on the left gushed or rhapsodized over her singular achievement as both a woman and an African-American born in modest circumstances. Why isn’t Secretary of State enough to convince girls that they can achieve great things in political life?

Hillary should lay off the “first woman” shtick. Young women don’t relate to it. They’re doing fantastically well by any objective standard. And the fact is that “on paper,” Hillary has many accomplishments to her name, to be sure, but so do many other women in America, only they did not have the benefit of a charismatic, brilliant and powerful husband to propel them to national attention, attract campaign donors and facilitate their rise to power.

On a level playing field, Hillary would not be where she is today. So enough with her gendered self-congratulation. It’s becoming counter-productive. But if she does win, and she probably will, can we ask that she return the china and the silverware and the furniture to the White House – and this time leave it there?