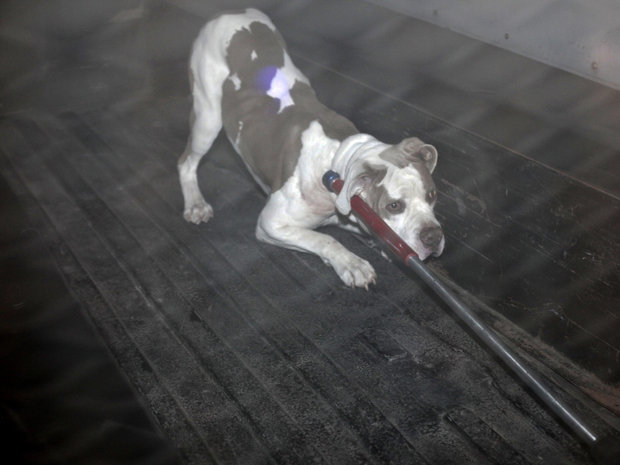 Barbara Kay on pit bull bans: The myths of multicaninism

A pit bull is removed from a Detroit home by police after it mauled a 3-week-old baby girl who died of her injuries, on Oct. 4.

This Saturday in Tucson, Arizona, Pit Bull Awareness Day will commemorate the victims of dangerous dog attacks. It will be a heartfelt, but modest affair. Those sympathetic to the (mostly) children and elderly who have been mauled, maimed and killed by fighting dogs are not as well-funded or obsessive as those infatuated with the breed responsible for these tragedies.

The pit bull advocacy movement (PBAM) never sleeps in its campaign to portray pit bulls and their close genetic kin as normal dogs unjustly maligned through media bias. In challenging breed bans, their spokespeople are well-versed in the discourse of civil and human rights (“racism,” “discrimination,” “profiling,” “genocide”). The result is widespread acceptance of the seductive dogma of “multicaninism”: There are no intrinsically dangerous breeds, just “bad owners.”

Even brilliant thinkers are susceptible to this specious category crossover. Malcolm Gladwell’s pit bull defence in The New Yorker, later incorporated into his book, What the Dog Saw, argued that profiling dogs indirectly sanctions racial profiling. But to conflate line-bred dogs — the epitome of the eugenically constructed stereotype — with naturally evolved humans is intellectually untenable and insulting to African-Americans.

Major dog-industry stakeholders — breeder associations, veterinarians’ associations and humane societies — all toe the multicaninist line, even though they know, and often privately acknowledge, that it is pit bull genetics — their inbred high prey instinct and impulsive aggression — rather than “bad owners” that account for a huge number of pit bull euthanasias a year in North American shelters. A litany of “good owners” and their children, mauled or killed by their “loving” pit bulls, quashes the multicaninist mantra.

Nevertheless, multicaninism is the prevailing wind in dog policy sails. Edmonton’s councillors just voted to repeal their 25-year ban on pit bulls. And a private-member’s bill to repeal Ontario’s 2005 ban gathered bipartisan momentum before the House was prorogued last week.

In his newly-published memoir, 28 Seconds, former Ontario attorney-general Michael Bryant says he enacted his province’s controversial 2005 pit bull ban on principle: He was confident it would pay off in improved public safety and dramatically fewer dog euthanasias (it did, as all such bans do).

The ban was international news. Bryant was vilified, threatened with violence and compared to Hitler on Facebook. (I sympathize; I also field Nazi tropes when I write about pit bulls.) Bryant writes: “The decision actually changed my political life. For years afterwards … the average person knew me as the guy who banned pit bulls.” What buoyed his spirits was grass-roots support. A poll reported the pit bull ban was the most popular public event in Canada since Newfoundland premier Brian Tobin’s public spat with foreign fishing trawlers.

It seems that when consulted, ordinary people would rather “offend” pit bulls than expose their children and pets to heightened risk. For example, Miami-Dade County recently endured a relentless PBAM onslaught in a referendum bid to repeal its 23-year-old pit bull ban. The pro-ban population did little politicking. But PBAM spent a fortune on publicity, marshalling support from celebrity athletes and wooing compliant local media. It was quite a shock to them when their noisy repeal campaign was shot down in flames 63-37%.

According to longtime Animal People editor Merritt Clifton, pit bulls and Rottweilers are 11 times more likely to attack another animal or human than the average dog. Pit bulls have represented half the total actuarial risk for injury since 1982. Add in Rottweilers, he says, and it is 75% of total actuarial risk. Since 1851, Clifton notes, in any given 10-year period, pit bulls alone have accounted for more than half of all fatal dog attacks in the U.S. and Canada, even though for most of that time they represented less than 1% of the dog population (about 3% today).

The “domestic dog” is a species. But all dog breeds are artificial constructs. Since they were invented 200 years ago, pit bulls have never been bred for anything but blood “sport,” including hunting and savaging slaves. Their sole raison d’être is causing animal and human suffering. And therefore, those who are drawn to pit bulls above all other 400-plus breeds – apart from those naive souls who have been duped, and plenty have — are morally bound to interrogate their motivation in fetishizing this canine anomaly.

It follows that those politicians charged with protecting the public, who see the numbers rising in pit bull ownership with a concomitant rise in animal and human suffering, are morally bound to ignore anecdotal sentimentality and trickle-down political correctness alike in the creation of responsible dog laws.