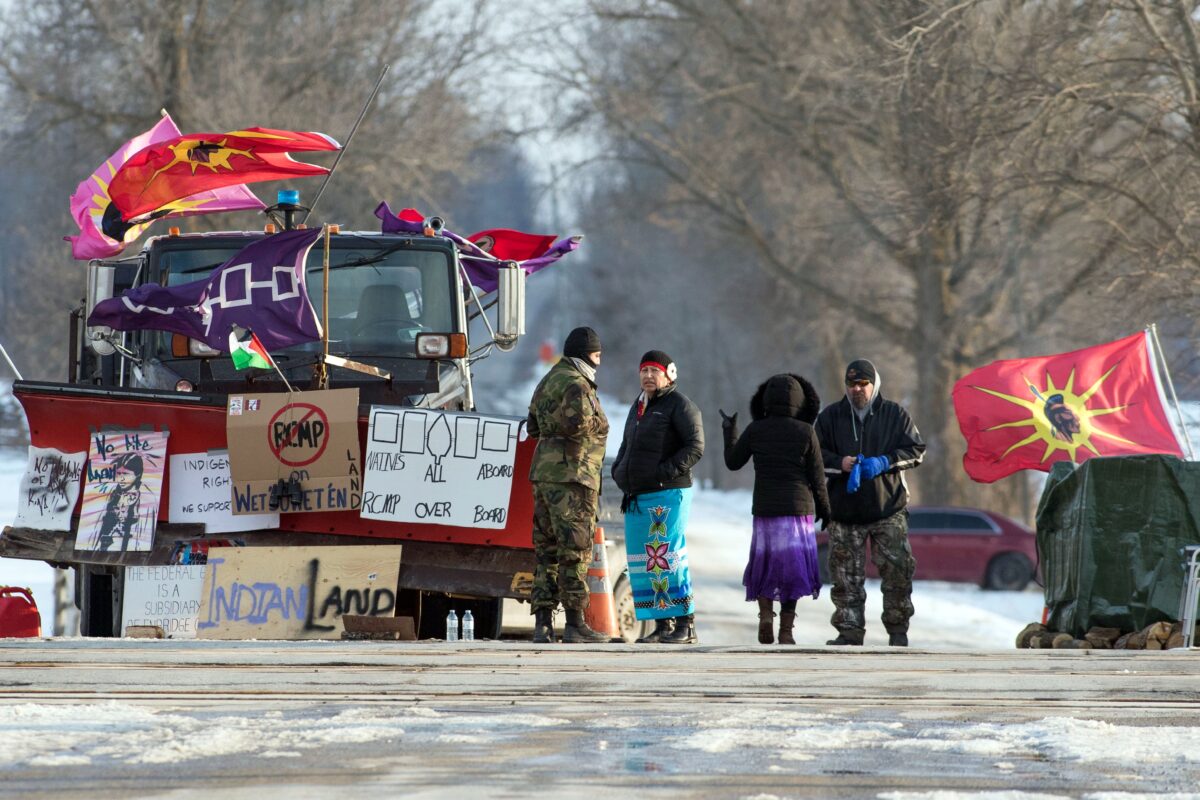 Blockades: Authorities Must Not Be Cowed by Radical Protesters

Canada is supposed to be the land of peace, order, and good government. At the moment, all three are in jeopardy. Thanks to illegal actions taken by a fistful of hereditary band chiefs and their eco-warrior allies, Canadians are holding their collective breath. When and how will this scofflaw-initiated standoff end?

When trains don’t run in Canada—and a huge number of them aren’t at the moment—far more is at stake than inconvenienced passengers, undelivered goods, and revenue/job loss. The railway united this country. But unlike airports, where security is tight, train lines are extremely vulnerable. Rail security is based on the honour system, which is why even peaceful disruption to its function strikes a certain dread in the national heart.

Those causing the stoppage know that very well. And they enjoy flipping law enforcement the bird. When a court injunction to remove the rail blockade near Belleville, Ont., was delivered to protesters, they torched it on the tracks. There’s an implicit message for Canadians in this grossly insulting gesture to law enforcement: See how easy this was? Nobody will use force against us, because the next time, instead of merely blockading the rail lines for a few weeks, we could just as easily blow them up. And not just at Belleville, but at transport hubs across the nation.

Spoken threats have come straight out of activists’ own mouths. In June 2010 (quoted by Al Jazeera, no less), Shawn Brant, a Mohawk who led the 2007 Highway 401/CN railway blockade, ominously observed: “The government ran its infrastructure through our land … it serves as an incredibly powerful tool of influence that allows us now as a society to engage government in … a relationship based on us having the power.”

Even before that, in 2008, a Canadian Security Intelligence Service assessment had concluded, “Multi-issue extremists and Aboriginal groups have demonstrated the intent and the capability to carry out attacks against critical infrastructure in Canada.”

Protest morphing into domestic terrorism is something we are not supposed to imagine, let alone say aloud. This is Canada, for heaven’s sake, not the Middle East. But our politicians do think about it every time such protests happen. And it’s why they tread very carefully.

Oka in Quebec (1988), Burnt Church in Nova Scotia (2000), Deseronto and Caledonia in Ontario (2008)—all of these standoffs reveal reluctance to push back against Indigenous triumphalism in order to enforce judgments. Since 1995 in Ipperwash, Ont., when unarmed Ojibway protester Dudley George was killed by a police officer—a disaster on Premier Dick Harris’s watch that no premier wants repeated on his or her watch—politicians prefer watching and waiting to risking another such “incident.”

Every once in a while we get a glimpse of just how scared authorities are of Indigenous militants. When then-police commissioner Julian Fantino was criticized for refusing to enforce the law at Caledonia—where a lands-claim dispute in 2006 became a years-long clash between town residents and protesters from the nearby Six Nations reserve involving violence to non-Indigenous people—he responded with spontaneous candour: “If I were to do something at Caledonia, [we’d] have an uprising across the country.”

If Fantino really believed that, the remark should have provoked a national discussion on what the federal government was doing to protect vulnerable targets. But that didn’t happen. We just don’t know how to have that conversation.

The government and law enforcement justifications for inaction in today’s crisis are particularly gormless. Transport Minister Marc Garneau said, “Freedom of expression and peaceful protest are among the most fundamental and cherished rights in a democracy.” But if pro-lifers peacefully protested abortion by preventing women from entering an abortion clinic, they would be removed—and rightfully, because thwarting access to services isn’t protest, it is obstruction of the rights of others.

The Ontario Provincial Police commented rather gnomically, “The proper exercise of police discretion should not be confused with a lack of enforcement.”

Since when does law enforcement have the “discretion” to abandon protection of people and property?

Meanwhile, there are more than 180,000 warrior-age Indigenous people living alongside Canada’s critical resource lines, all difficult to defend. Many of these restless young men hold revanchist views about colonialism. They receive not-so-subtle messages from people in high authority that their agitation is justified. In 2011, Justice Murray Sinclair, who was the chair of the Truth and Reconciliation Commission at the time, declared that “Canadian society must heal the damage caused by the Indian residential school system or deal with the violence that will be undoubtedly unleashed against it.” Undoubtedly? What a provocative statement.

“Society”—you and I—cannot provide descendants of past injustices with a subjective feeling. To my ears, Sinclair’s irresponsible words offered pre-exoneration for the use of violence by grievance-collectors on emotional grounds. In any case, how can people raised in a culture of identity politics begin to heal when they have been overtly encouraged by their prime minister not to heal, since, as Justin Trudeau has said, they continue to be victims of an “ongoing genocide”?

In 2008, during a meeting of the Senate Committee on Aboriginal Peoples, Sen. Romeo Dallaire asked Prime Minister Paul Martin about the Aboriginal Day of Action,  “Is the internal security risk rising as the youth see themselves more and more disenfranchised? In fact, if they ever coalesced, could they not bring this country to a standstill?” Mr. Martin replied, “My answer, and the only one we all have, is we would hope not.”

Hope not? That is the government’s “plan”? Trudeau is hardly likely to rush in where more muscular leaders feared to tread. He was for much of this crisis literally and figuratively AWOL. From Africa, he called for “all parties to dialogue.” He “urges resolution.” Empty phrases. A blaring headline in the National Post said it best: “Leaderless.” Amid the mounting criticism, he cancelled his trip to Barbados (related to his quest for a U.N. Security Council seat) and met with cabinet ministers to discuss the blockades.

The old, comforting paradigm of the passive, stoic Indigenous person who turns his grievances inward is long gone. The defeated survivors of the residential school era have been replaced by confident leaders who are impatient with plodding negotiations, resentful of Canada’s fetish with multiculturalism, which obscures the singularity of indigeneity; and who are well versed in a global rights culture supportive of all oppressed people of colour struggling against white European oppressors.

An older generation of Aboriginals has seen the shift from the inside, and they have been made uneasy by it. Elder Andrew George of the Wet’suwet’en nation told APTN (an Aboriginal TV network), “When you look at what’s happening with the youth, it’s spreading like wildfire, but there’s no control.” He said many other elders are concerned. “We are afraid something bad might happen.”

Barbara Kay has been a weekly columnist for the National Post since 2003 and also writes for other publications including thepostmillennial.com, Canadian Jewish News, Quillette, and The Dorchester Review. She is the author of three books.