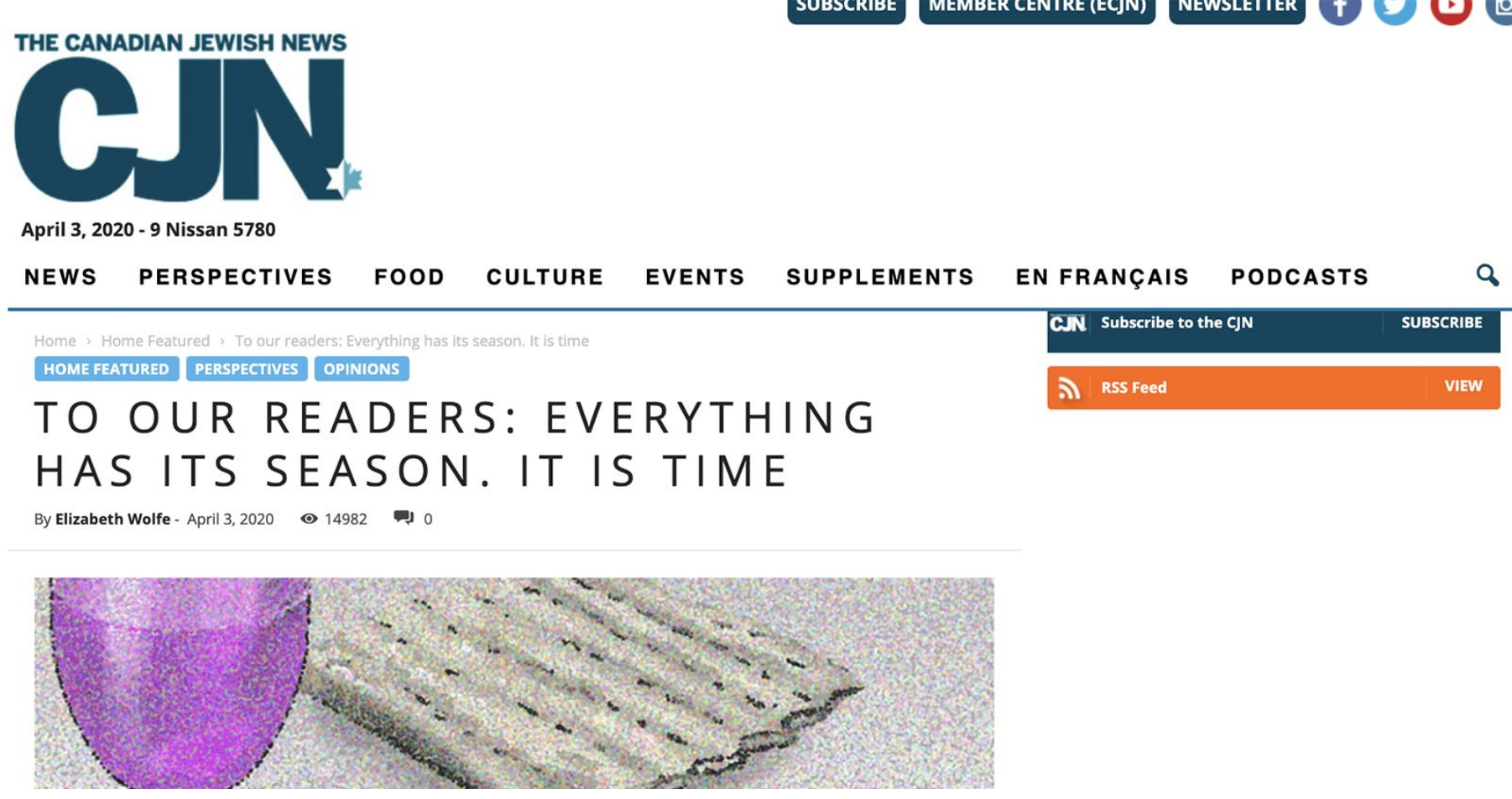 We hope that somehow a third act is in store for the CJN when Canadian life returns to the new normal, whatever that may look like.

Canada loses a vital voice in media as CJN shuts down

The headline struck me with force: “Another Covid-19 casualty: After 60 years, the Canadian Jewish News will cease operations.” As the article explains, the combined impact of dwindling ad revenues, a problem for all print media, and the Covid-19 virus, was too much to withstand.

It was a sad moment for me on both a personal and a professional level. Professionally, I am now out of an enjoyable gig, as I have been writing a monthly column for the CJN for the last few years. I was grateful to have that outlet for my Jewish-themed opinions, because while I do use my other platforms for columns on campus anti-Zionism and so forth, I don’t like to harp on them with my general readership. And there were certain topics—sometimes of a sensitive nature—that I reserved for my CJN “lantzmen” (originally fellow Ashkenazi Jews from Europe, but more loosely used to mean fellow Jews of all provenance).

In other words, my other platforms permitted me to comment on issues that affected Jewish or Israeli interests—i.e. to opine about issues of concern to the Jewish community – but in the CJN I opined directly to fellow Jews on issues affecting us. I slipped intuitively into a different tone, more relaxed and familiar, and found pleasure in the inherent intimacy of my relationship with the reader. There, at the CJN, “I could complain.”

The loss of a monthly slot is nothing compared to the loss being experienced by the CJN’s permanent staff, and my heart goes out to all those who have been with the CJN for many decades. I reserve special sympathy for editor-in-chief Yoni Goldstein, who had the daunting task of re-inventing the CJN’s brand after it briefly folded in 2013, and was resurrected following a groundswell of public demand.

Yoni is a former protegé of mine. Years ago, I met his mom at a talk I gave in Toronto. She “pitched” her son as a great budding journalist. I agreed to read some of his work, liked it, and in turn pitched him to the National Post, who hired him and helped him hone the talents that brought him to the CJN’s editorial helm.

In its pre-2013 incarnation, the CJN had fossilized; it was a relic of a pre-internet age, when print newspapers were the primary source of information regarding community events. It was informative but dull. It had the feel of a corporate house organ.

Much of the newspaper was filled with ads from bridal shops, caterers, bar mitzvah gift ideas, fashion houses, travel temptations of all kinds (especially those offering kashrut compliance), and Israel tourism. Engagements and special birthday notices filled whole pages. Loving attention was paid to every single Jewish holiday, significant or minor. Torah discussion by rabbis, reminiscences by readers of youthful celebrations, special recipes—in the old old days just Ashkenazi ones, but gradually, from the 1960s, as the Sephardic population grew and grew, wonderful Middle Eastern Jewish specialties—and of course, tons of Israel-related copy, virtually all needs—or news-related. Anti-Israel activity on campus was a constant theme in the 2000s.

Many pages of every issue were devoted to reports of fundraising galas, lavishly accompanied by photos of our community’s gowned and tuxedo’ed Who’s Who (in some cultures, aristocracy is handed down by bloodline; in the Jewish community, philanthropic largess determines our kings, queens and earls.)

This tradition continued in the new CJN, of course. Gala reporting is to Jewish news as recipes are to Chatelaine Magazine, which reaches some four million Canadian women every month. (I am reminded here of the story of a new Chatelaine editor  who, holding strong feminist views, proposed doing away with the recipes section, which she felt was a throwback to patriarchal culture. She was set straight in no uncertain terms, and in fact did not last very long there.)

Since it served the entire Canadian Jewish population coast-to-coast (but overwhelmingly located in the Toronto-Montreal-Ottawa triangle), reaching Jews who are militantly secular and the ultra-Orthodox, Ashkenazis and Sephardim, Zionists and anti-Zionists, political progressives and conservatives, the reigning principle was avoidance of conflict. Controversy was indeed successfully avoided, but at the expense of journalistic dynamism.

Yoni was a breath of fresh air. He kept the big inclusive tent, but enlarged it to include dissenting opinions on inherently thorny subjects. In July 2017, for example, on Canada’s 150th birthday, Yoni invited me and my son Jonathan to hold an email exchange on the question, “Has Canada been good for the Jews?” The dialogue was respectful, but pointed in areas where we sharply disagreed, and got a fair amount of attention. Several readers told me that the debate encapsulated the generational divide they experience with their own children, and were grateful for it.

I am appreciative of Yoni’s high regard for freedom of expression, as long as opinions were framed with civility. As one of the few conservative columnists, I was glad of the opportunity to push back against certain fellow columnists’ assertions when I believed they were wrong, as well as to voice my discomfort with so many progressive Jews’ alignment with a political movement that is steeped in anti-Semitism. As with the “Kay vs Kay” exchange, a number of readers told me privately they were very glad to see a bullishly politically conservative voice in the CJN, while making a point of stressing that this is something they would never say publicly for fear of denunciation from their progressive friends.

I am particularly grateful to Yoni for publishing the most Jewishly controversial column I have ever written, in Jan, 2018. In it I expressed my opinions regarding the three most divisive social issues of the modern era: abortion, gay marriage and transgenderism. It had struck me that what they all had in common was their purposeful or contingent association with infertility, which bumps up against the powerful Torah commandment, “Be fruitful and multiply.”

No need to rehash the column here, only to say that Yoni knew it would attract blowback (which it did in spades: when Jews get angry at other Jews, the sparks fly high and wide) and still published it. He even permitted me to write a follow-up column responding to personal accusations against me that I felt amounted to defamation. I imagine Yoni took a lot of flak for those decisions, so I am glad of this occasion to express my appreciation for his determination to walk the walk of speech freedom.

The print circulation of the CJN was about 30,000. Considering there are fewer than 400,000 Jews in Canada, many of them entirely detached from any form of Jewish life whatsoever, that’s a pretty good ratio. The new CJN, with its respect for traditional institutions, but openness to vigorous debate on issues that can be divisive, and for that reason especially needed a common forum for discussion, was a valuable cultural commodity.

I therefore hope that this forced stoppage, like so many other businesses felled by Covid-19, turns out to be a mere hiatus in production, and that a third act is in store for the CJN when Canadian life returns to the new normal, whatever that may look like.