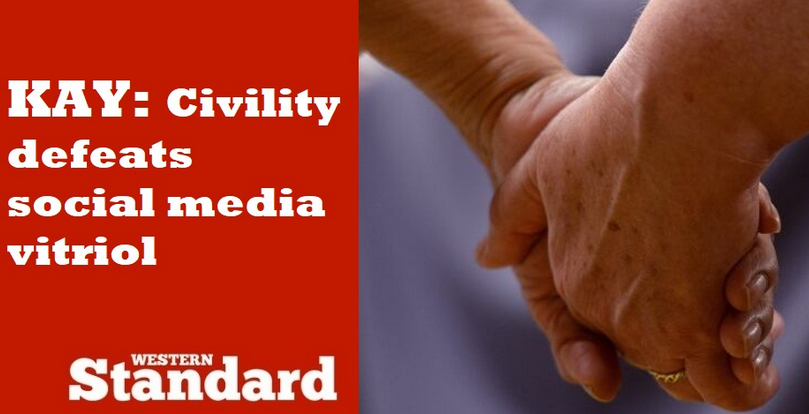 “On social media, the temptation toward incivility is strong, the will toward good manners weak.”

The “Christmas column” can be the bane of one’s writing year.

Unless your country is actually being invaded, there’s no point in writing about world events. Or Quebec’s hijab law. Or why trans activism is making life miserable for women. Or even whether COVID’s Omicron variant will turn out to be weaker or stronger than this expert or that one has predicted.

People are done with all that for the last week of the year. They want a news-and-views rest. They want to de-stress and cocoon with loved ones. If they’re reading publications like this, they want laughter, reassurance all is not as bad as it seems, or a bit of uplift for the spirit.

They want to be reminded our society is not irredeemably riven. That behind the vapidity, stupidity, bitterness, and self-righteous partisanship taking up so much of the public bandwidth, human decency is still alive and well. That off the digital grid, acts of kindness, charity, humility, and empathy continue to take place across “enemy” lines. Since I spend a lot more time than is good for anyone on Twitter wading through verbal sewage of enmity, accusation, and ill will, I feel that need acutely.

It was, therefore, balm to the soul to read a story by American writer/ghostwriter Nancy French in the conservative weekly magazine, Washington Examiner’s Dec 7 print issue, titled “What Civility Really Means.” Washington Examiner is a terrific weekly read, but most of it is American politics’ inside baseball, so it may not be high on the list of must-reads for Canadian conservatives. Even though this is not my story, it spoke to me loud and clear, and I hope it will as well to those of my readers who are as addicted to social media as I am.

In 2016 French, who is a political conservative (but not a Trumpist) and a sex-abuse survivor, wrote an article for the Washington Post on her teenage experience with a predatory local preacher. Her story served as a jump-off point for condemnation of both Democrats’ and Republicans’ indifference to sexually delinquent attitudes and behaviours in their political leaders.

A politically progressive New York woman, Kathy Kattenburg, expressed sympathy for Nancy’s views on Twitter, so French began “following” her. However, when Nancy’s husband David — David French is a traditionally Christian commentator, and a former attorney with a specialty in high profile religious liberty cases — began posting supportive tweets for the Second Amendment on his Twitter feed, Kathy first criticized him, and then, with each further conservative-leaning tweet from him she found annoying (faith, sexual mores), descended into what verged on trolling.

When David expressed pro-life views, Kathy “posted about her multiple abortions.” When David deplored antisemitism, she said he should leave that “to people who actually know what it is.” From her tweets, it was easy to draw the conclusion that Kathy was not only uncivil, but a rather nasty human being.

The Frenches could easily have blocked Kattenburg, and put her irritating barbs behind them, returning to the comfort zone of their own political silo, as so many people on both sides of the political spectrum tend to do.

Instead, the dilemma provoked Nancy to reflect on her own polemical style, which she admits was not always a model of temperance: “Naturally prone to acrimony, I, too, threw sharp elbows at political opponents in my work as a consultant, strategist, and ghostwriter. Political insults were warranted, expected, and part of the fun — good-natured pugilism, delivered with a wink. I wasn’t going to let civility water down my deeply held beliefs.”

Civility. French recalls a pivotal moment during the 2016 presidential campaign. One Sunday morning after church she read a tweet about Donald Trump’s infamous ridicule of war hero John McCain for having been captured in Vietnam (“I don’t like losers”). She was shocked when fellow Christians shrugged it off. This was her “aha!” moment. (It was also mine. In spite of his accomplishments — and there were a good number of them — I have never found Trump anything less than repulsive as a human being since he made those comments.)

The residue of French’s little epiphany was to conclude Trump was “the natural byproduct of decades of political contempt. My ‘sharp elbows’ approach had contributed to a no-holds-barred discourse that was hurting our nation.” Nancy decided to modify and civilize her online discourse. And did.

Fast forward to 2020 and the height of the COVID lockdowns. Kathy tweeted she was having problems getting groceries. In spite of the risk of attracting more verbal abuse from her Twitter foe, French messaged Kattenburg to ask if she could help. It turned out Kathy was disabled, alone in Manhattan, and unable to get food deliveries from overwhelmed providers. She’d been living on rice and pancake mix for weeks.

They spoke on the telephone. Nancy says her heart “softened” as Kathy listed her needs: toilet paper, canned tomatoes, and a favoured brand of chimichangas. During the conversation, Kathy admitted she disliked David, but conceded Nancy had a “pleasant online persona.” This meant Kathy had noticed the deliberate change in Nancy’s online approach, which was gratifying.

Shockingly, even though Nancy dedicated time and effort to the project of getting Kathy supplies, she found that even Amazon, let alone Whole Foods, could not guarantee delivery within weeks. Synagogues and churches were not the solution, either. Nancy spoke to Kathy several times a day. Finally, with trepidation, Nancy suggested, “I think we should just pray about it.” To her surprise, Kathy agreed. “I’ve never prayed with a Jew before,” Nancy admitted. “Is it the same, but just not in the name of Jesus?” “Pray however you want,” laughed (doubtlessly secular) Kathy.

Miraculously, as it seemed, a Christian pro-life friend of Nancy’s came through for her, and between the friend, church connections, and — eventually — the dilatory food services, Kathy was amply supplied with all the groceries necessary to see her through until logistics stabilized.  An actual friendship was now established between Nancy and Kathy. They exchanged photos and novel-reading tips. Their real-time conversations were “rich and meaningful.”

A hurdle loomed: discussion of abortion. Nancy bravely raised the issue, and Kathy revealed the tragic story behind the “multiple abortions” she had bragged about on Twitter. A daughter had been born with Tay-Sachs disease, a rare and fatal genetic disorder that disproportionally afflicts Ashkenazi Jews. Tests in following pregnancies kept turning up the same devastating result. So Kathy aborted them. Later she was able to have one healthy daughter. Nancy finally understood and “recognized the pain that existed beneath what seemed to me to be Kathy’s aggressive pro-choice posts. And I understood and valued her point of view.”

To round out the story — in a film, this would have seemed far too coincidental, pat and even schlocky — Nancy herself conceived a child that, she was told by her doctor, could well die or be permanently disabled. Kathy sympathetically offered counsel on abortions. Nancy realized this was Kathy’s “way of showing mercy,” but rebuffed her well-meant advice, explaining she was pro-life, no matter what. On Twitter, in the old days, Kathy would have railed at her foolishness. In the new scenario, “Kathy prayed.” She was overjoyed when the Frenches’ daughter was born healthy.

Again, in what seems like the kind of postscript you would find in an old-fashioned Christmas movie, Kathy “used her stimulus check to subscribe to David’s newsletter.” She still disagrees with him, Nancy writes, “but respectfully.”

Nancy concludes with reference to the teacher and writer Pier Massimo Forni, co-founder of the Johns Hopkins Civility Project. In his book, Choosing Civility, Forni presents 25 basic rules for establishing kindness, courtesy, and good manners as norms of everyday life. Nancy quotes Forni: “To be civil — to behave in a manner that takes into consideration the feelings and comforts of others — means practicing the art of giving.”

Twitter encourages the opposite of civility. It teaches us never to take into consideration anything other than the point we want to make. And if mockery and derision help to undermine those making a different point — those from another tribe — whom we see not as human beings, but as disembodied bots whose purpose is to make our tribe objects of derision, which in the digital world is a kind of mini-death, then just do it. On social media, the temptation toward incivility is strong, the will toward good manners weak.

Kathy Kattenburg obviously gave permission to Nancy French to use their mutual story, warts and all, as they say, which took integrity that deserves readers’ respectful acknowledgment. This uplifting tale of an unlikely friendship, which would never have bloomed without the courage Nancy French displayed in rolling back what I think of as Twitter’s “irony curtain” is a gift that will keep on giving for those who can identify with her message. Only too aware of my own tendency toward raising “sharp elbows” on Twitter, I certainly did.

Merry Christmas to my Christian readers, and may 2022 be a kinder, gentler year than the two that have come before.